Confession time, dear readers. A while back, I was working on a secret Kentai project that I never posted about here, because when it was done, it was completely irrelevant. For reasons I just can't explain, I love a terrible movie. 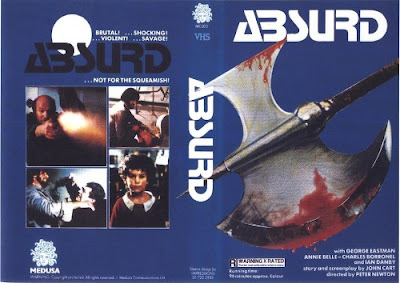 STILL banned in Britain uncut, baby!
My love for Aristide Massacessi trash is hardly a secret; I've affectionately thought of the man as Joe D'amato for a decade, and even before I'd seen any of his films I'd fallen for his lurid charm. Regularly combining sex, violence, and whatever was in season, he may as well be the poster boy for the so-called grindhouse era; he simply copied whatever was big in Hollywood at the time with more over the top stupidity and a tenth of the budget. Beyond the Darkness, Emanuelle in America, and Caligula: The Untold Story prove that he was capable of great works of horrific nature, though he was just as prone to creating total crap, too. Anthropophagous, for all its' infamy, is somewhere in the middle... truly terrible D'amato pictures like Raptors and Erotic Nights of the Living Dead are, however, so devoid of shame and reason that they're worth watching (once) strictly to rot your brain. Unlike some other now legendary Italian genre film makers, D'amato was rarely boring, and when he saw that making exploitation films for video was simply a dead end he did the smart thing and switched to directing now legendary XXX features, based on Shakespeare, historical figures, and yes, the holocaust. May he rest in peace.

One of his terrible films was originally called ROSSO SANGUE (Blood Red). Sometimes marketed as a sequel to Anthrophagous: The Grim Reaper, the film follows George Eastman (born Luigi Montefiori) who plays Nikos, an unstoppable and mute killing machine, who - with a madman who knows his dark past hot on his heels - stalks a babysitter and the children in the house on a dark night while blinding fast piano music plays... stop me if you've heard this one... 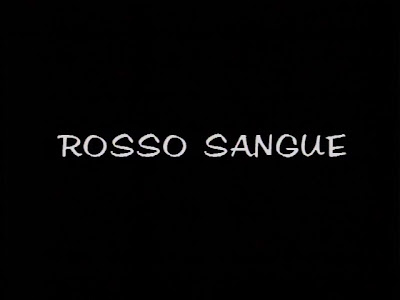 Mya can use photoshop? We're all fucked now.
In no uncertain terms a rip-off of John Carpenter's infinitely superior HALLOWEEN (and its' sequel!), right down to its' blatantly derivitive musical score, Rosso Sangue didn't make much of an impact when it came out in 1981. It wasn't until a few years later when it was re-released as ABSURD that people began to take notice, largely because of its' subsequent banning in the United Kingdom as one of the so-called "Video Nasties" in 1983.

While a rehash of better material, the film is still a lot of fun, parading around more head-based injuries than any slasher film I know of. Most of the draw is, I think, Eastman himself. Even without wearing a mask or the deformed make-up of its' psuedo predocessor, the man is a hulking mountain of a character, possessing a unique intensity that makes him perfect in the role of a mindless killing machine. The fact that he's about 10 feet tall and build like a brick shithouse sure didn't hurt, either.

The film is dreadful, but watching it still makes me happy. Why? Beats me. I don't question why I like good movies too hard, either.

Less than a year ago I asked a friend of mine if he could send me the German DVD he had access to, from the infamously terrible Astro Filmworks catalog. The disc was infamous for several scenes being sourced from VHS, and while all of that restored footage was in English, the rest of it was dubbed in German only. It so happens that this friend also found me the original audio from the uncut UK pre-cert VHS (shown above), and so I spent 48 hours cutting the English audio to the German video. It was a messy patch-work affair, but the results were as good as could be expected.

Sadly, I made it whilst my PC was ailing pretty heavily, so in the end, the work was lost.

I began working at it a second time (once my computer had been put down and resurrected Passion of the Christ style), and had roughly the following conversation with a friend of mine. 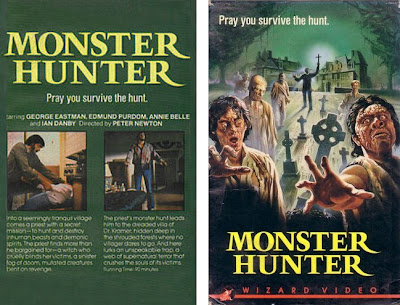 This video box is lying so goddamn hard to you.
So I decided to wait the few months and see what Mya could do with the title. With the Ass-Tro DVD being tinted green, crawling in chroma noise, and littered with print damage, I didn't think it was possible for a newer release to be any worse.

It's rather fitting that Mya Communications decided to call their release this film under the French title "Horrible". Not only is the film just as the title describes (damn it, I make no apologies!), but their release is only a marginal improvement over the Astro DVD from Germany released several years back.

When this disc looks good, it's pretty good: 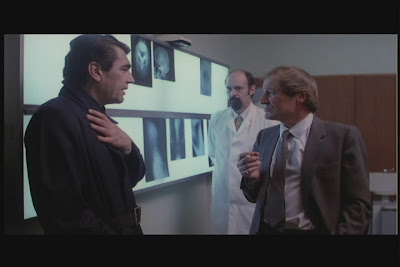 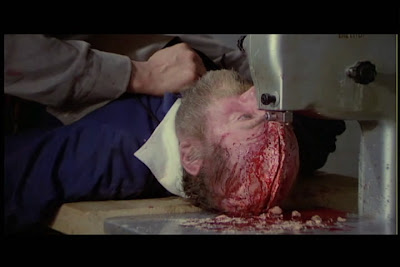 And when it's doesn't, it's fucking awful: 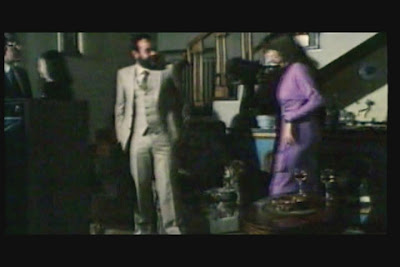 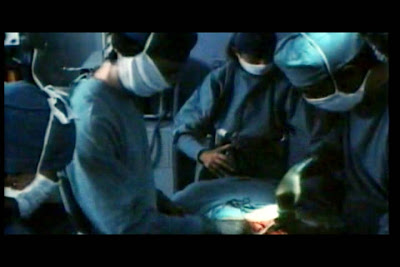 To help show you that all Mya (or whoever) did for the "restored" footage was crop an already pan-scanned VHS copy, I've included the following comparison using two frames from the DVD: 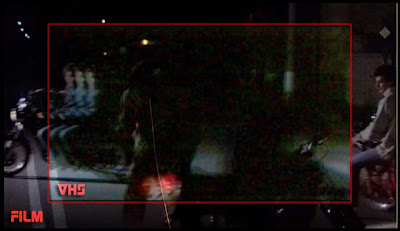 And you guys didn't even have the good sense to upscale the footage that didn't suck? Fuck you, Mya Communications. No, seriously. My English track on the Astro transfer was never going to look perfect, but even I knew how to make a mother fucking 16:9 transfer from inferior PAL materials! It's 2009 and we're still getting letterboxed 1.66:1 DVDs from labels who know better? What the hell...

At least the Mya DVD isn't tinted green, covered in chroma noise, and full of burned-in German subtitles, so it still beats the old Astro DVD, which up until now has been its' only competition. All of the crap footage matches the VHS sourced misery from the Astro DVD, though this release includes a couple more restored clips (such as D'amato's cameo as a sloppy drunk) so I can only assume that both DVDs were mastered from the same print, perhaps even the same PAL telecine. The print hasn't been remastered, and thus is littered with minor dirt specs and film scratches. It is progressive, barring the VHS sourced footage, which is deinterlaced and has plenty of ghosting. It isn't ever particularly sharp, there's nothing resembling natural film grain, there's an odd green stripe on the right hand side of the transfer, and the compression is average resulting in plenty of mosquito noise and mild blocking.

It's a mediocre DVD even when it's not completely screwed up... but, considering the lineage and fame this film has in these United States, I guess it got exactly what it deserved. The VHS sourced footage doesn't have any Italian audio, by the way, but as the disc doesn't include English subtitles to begin with I doubt anyone in North America actually gives a goddamn.

We aren't through yet, though. The English track has been pitched down too low, just like their mishandling of FOUR FLIES ON GRAY VELVET from earlier this year. The Italian track (again) sounds fine, but the English audio simply sounds wrong, with sound effects having a dull THUD when they should be a click and the Halloween "inspired" soundtrack now completely off. I'll admit that I don't care about ABSURD quite as much as Dario's "lost" film (which never was...), but at least that was restored in HD from the negative, and included several bonus features. Flies is still a bit of a mess, but the massive effort that went into making it happen was almost worth the $30 Mya is asking for it.

This piece of crap comes in an ugly box for $25. 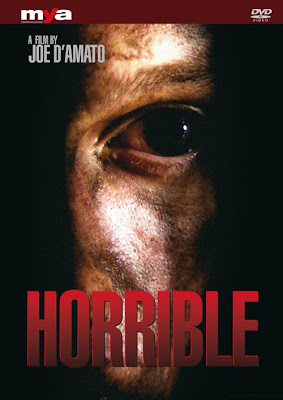 All right, Hostel 3! ...wait a second...
Special features? Surely you jest. They couldn't even include a gallery of video box art, so this blog has more extras than the disc itself. They couldn't even steal the original UK trailer from YouTube? Why the hell not, they did for Four Flies on Gray Velvet!

This is a real disappointment, and while I don't directly have any ill will towards Mya, I do wish they'd get better at what they do. I know that being the only game in town they'll still sell plenty of copies, and for the love of all things D'amato, I guess that's a good thing. Seriously though, Mya Communications, PLEASE get a quality assurance team who's not deaf and blind.
at 10:16 PM