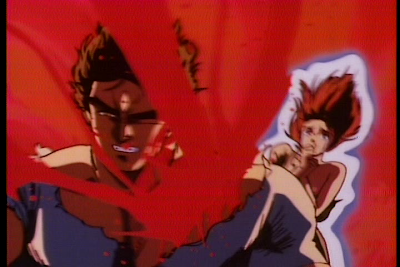 The hideous image you see above is a screencap from the 1987 supernatural horror epic, MARYUU SENKI 魔龍戦記 , a moniker that translates to "Demon Dragon War Record". It's at once the third (and final) episode of the Pink Noise OVA series that AIC produced through the mid 1980s, and the first chapter in an original anime trilogy, which continued with Maryuu Tenjou and concluded in Maryuu Shinden, in 1988 and 1989 respectively.

As is customary for a great many mid 1980s horror OVAs, it's about an attractive he-bitch and his hot dead girlfriend demon trying to reign darkness and ruin upon all mankind, and so it's up to the rag-tag team of drunken ninja/half-oni/onmyoji bikers/latent teenage girl esper, who must find a way to stop him from reaching his goal. Sure, I'm over simplifying things, but that should be enough to tell you wither you'd be interested or just insulted by this bit of unpretentious and largely forgotten trilogy gory, sexy anime fun.

Speaking of gory and sexy, you'll probably notice that the above screenshot looks like a bad stretch of asshole. By and large, the disc doesn't look terrible, and I'll prove it: 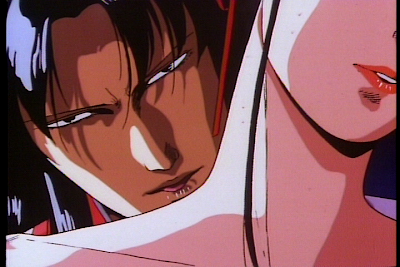 You just know he's thinking "Vaginas are gross... I wish I had one."
The problem is the last 5 minutes or so of this 30 minute LD got pretty badly borked by the disc literally ungluing at the edges. I'm serious! I Switch On, Disc In, Hit Play all Gekiganger 3 style, walk away to make a sammich or whatever it was I decided was a good idea, and come back when it's about through half an hour later. When I come back, I notice that the player is vibrating, and that the disc suddenly looks kind of terrible. Hrm... that's probably not a good sign. But there's only about 4 minutes left, might as well wait it out, right?

I hit eject, and I'm greeted with two halves of a giant shiny sticky laserdisc oreo, which I could literally press back into a single piece. Episode 2 and 3 were recorded after this without issue, so I can only chalk this up to being nothing more than a positively epic instance of LD layer seperation. What you see at the top there is the early stages of laser rot, though thankfully I got to this shortly before the entire disc became a half-hour of brightly colored digital slow. I've had a couple discs like that over the years... it ain't pretty. Though I guess neither is that first screen shot.

The funniest part is that even The All Mighty Wiki says that inferior adhesives and laser rot were only an issue on double-sided discs. Well stuff it, anonymously submitted second hand information! Episodes 2 and 3 are basically pristine, aside from being noisy 80s video transfers littered with film damage: No laser rot, no magical layer separating magic tricks. Just good old noisy-ass NTSC analog video.

Once again I wonder if investing in a better LD player would do me any good in the long run, since even the "good" parts are none to pretty compared to the relatively noise-free VHS caps I've been doing for a while. But then I remember that I'm broke and doing all of this archiving stuff for no cash involved. Then you all laugh and have that "oh, Kentai!" face. Freeze frame! Cut to commercial. Come on, you know how my life is.

I do believe that these were fansubbed back in the VHS days, but I have no clue by whom, or what title they released it under, so even if you could still get VHS fansubs (you can't) it'd be a bit of an ordeal to find. I guess I can worry about all of this after I've experimented further with the automated dirt removal script I've been shown can work wonders...

Ah yes, a friend of mine pointed out that while there is an LD sourced DivX file floating around on the internet, it's so awful that he couldn't make out any of the kanji in the opening. To prove that this DVD will be a step up, enjoy this impregnable wall of evil text! 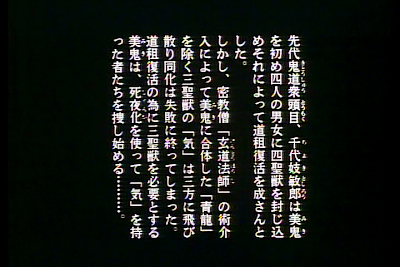 This is the source, rather than the final DVD encode, but I'm still tweaking it. The encode shouldn't look any different anyway, since this is a totally static shot and I'm not using either dithering or vertical filtering.
at 10:45 PM

This title is known in the fansub community as "Evil Dragon War Chronicles", and BodyJack was the fourth and final title in the Pink Noise series.

And guess who "fansubbed" Maryuu? That's right: S. Baldric! Small fucking world, ain't it? I have the tape, so if can wait until January, I can get you a copy.

I could have sworn Body Jack was the second, but you're right, Pink Noise continued on with or without "Evil Dragon War Chronicles".

Whoa, S. Baldric? For real!? God, will I ever be through working on the same crap he subtitled 15 years ago? (I hope not...)