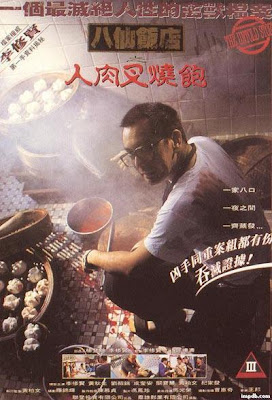 八仙飯店之人肉叉燒包 The Untold Story ("Eight Immortals Restaurant: Human Meat Buns" - 1993, directed by Herman Yau, starring Anthony Wong and Danny Lee) can be seen as the brutal Hong Kong opposite of Hollywood's own The Silence of the Lambs (1991, directed by Jonathan Demme). Both were modern day police pictorials about tracking down a murder, both featured a respected actor turning in an award-winning perfomance as a deranged serial killer, and both were massively influential on what would be viewed as a more modern - not to mention legitimate - form of horror cinema.

The parallels in terms of their cultural impact are certainly there between Anthony Wong's portrayal of Wong Chi-Hang ("The Bunman") and Anthony Hopkins' now totally iconic Hannibal Lecter ("Hannibal the Cannibal"), and yet the characters themselves couldn't be more different.

Largely because of their literary and journalistic roots respectively, they occupy totally separate ends of the cinematic universe; Thomas Harris' already over the top novel gave birth to the charming and scheming Lecter, an amalgam of all of the charismatic qualities in the long and colorful history of American serial killers wrapped up in the guise of a James Bond villain. Lecter was a misunderstood monster, a man so smart and so privileged that he found himself to be better than the world, and began destroying the parts of it that displeased him for lacking the class he demanded from his surroundings. He was a sociopath, but he was also a gentleman; a cultured, quick witted, and in the context of playing mind games with Jodie Foster, downright seductive. He was the unsettling embodiment of carefully measured pure evil that everyone loved to hate. He wasn't a serial killer, he wasn't even human - he was a fallen angel who delivered gruesome justice however he saw fit, and who are we mere mortals to judge him for it?

Audiences loved him so much that Hopkins not only came back for Ridley Scott's sequel in 2001, simply called "Hannibal", but even remade Lecter's first cinematic appearance in Brett Ratner's "Red Dragon" a year later. This effectively rendered Brian Cox's competent (if unmemorable) turn on the character in "Manhunter" back in 1986 little more than a curious foot note. While both Red Dragon and Hannibal are certainly decent films in their own right, only Silence of the Lambs netted Hopkins an Oscar.

Wong's character (of the same name, convieantly enough) was based on a genuine murder case that happened less than a decade prior in Macau. Director Yau even got to hold an interview with the convicted killer, trying his best to understand the kind of person that the so-called Bunman of the Eight Immortals Restaurant really was. Wong himself was no stranger to playing the heavy; being half English he found himself typecast as the villain, typically hot headed gangsters. Ironically it was only in the sequel to The Untold Story that Wong would get a chance to branch out into a sympathetic, comedic role... but Yau and Wong worked together on one more grotesque masterpiece in Ebola Syndrole, a film which not only topped The Untold Story in sheer nastiness, but it simultaneously mocked it, and its' flood of generally less interesting immitators.

Yau and Wong put their heads together and created not a caricature of evil, but a character who's utter lack of distain for his fellow man made him more monstrous than any masked zombified bogey-man. Wong disappeared completely into the persona of a selfish sociopath obsessed with gambling, cheating, rape, and inevitably murder. Nothing and no-one is spared by Wong, and that selfless and completely believable portrayal of a dangerous thug deserves every accolade its' ever been handed, including the 1993 Hong Kong Film Award for Best Actor.

But let's not get ahead of ourselves. Hong Kong horror films have the nasty habit of flipping between savage exploitation and zany comedy at the drop of a hat, so much as I wish I could play this film up as the Cantonese equivalent of Bad Lieutenant, it's really more like somebody constantly flipping the channels between Henry: Potrtait of a Serial Killer and one of the Police Academy films. You'd think that combination of retard humor (the cops) and unpleasant psychopathic behavior (the Bunman) would make the film incomprehensible... but, honestly, this sort of ADD shift in tone is one of the things that makes Hong Kong "Cat III" (18+) films so unique and amazing. If you can't handle a film jumping from a dead serious scene of a girl being raped to death with a fist full of chopsticks to a gag about a lady cop dressing like a hooker to impress her girl crazy boss, you should just stay the hell away from Cat III films entirely. They are simply not made for you and your Hollywood palette. Hey, that's fine - more Cantonese for me!

The best source out there (despite Raptor's claim) is still the Tai Seng R1 DVD, if only because it's a native NTSC transfer. It's non-anamorphic, has poor contrast, is smeared with noise reduction, littered with print damage, and has a funky blue-green tint that covers the entire film. If this had been a port of an older LD I'd be slightly impressed, but this was a brand new transfer Tai Seng put together in 2004! At least it comes with not one, but two commentary tracks with director Yau and star Wong, both in English. No English dub for the film seems to exist, which strikes me as almost a shame. Much like Men Behind the Sun, its' wretched awfulness could have given us all sorts of unintended hilarity. 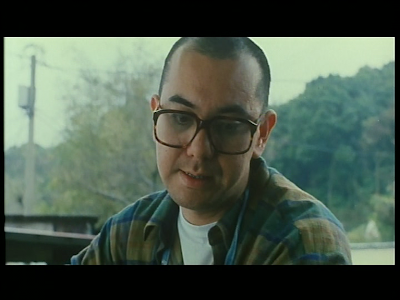 There's only been one attempt to "remaster" it so far. That was courtesey of Raptor, an Austrian label who released a special limited version of The Untold Story featuring a brand new German dub, as well as all of the commentaries from the Tai Seng transfer. It's the only dual-layer release with English subtitles, and it came in a kick-ass digipak designed after a Chinese resturaunt menu. Each set was numbered, and even included two pairs of chopsticks and replica Human Meat Buns! Now that's service. So, how was the new transfer? 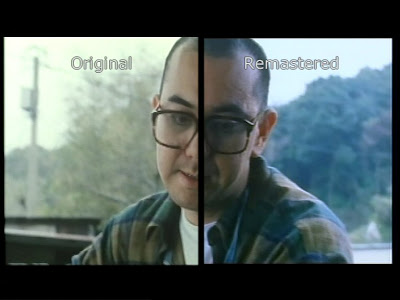 As you can see, Raptor figured that tinting the film blue and cranking up the contrast constituted it being "Remastered". I'll give them one point, the sky looks great, but what about the fact that Wong's white shirt is now blue, and his face a freakish shade of purple? Well, that didn't seem to bother Raptor one bit, as the entire Austrian DVD looks like this. It's also an old-fashioned NTSC > PAL conversion, so expect ghosting galore. If you speak German or only have PAL/R2 equipment it's your only option, but that doesn't make it much good.

"So what?" I hear you thinking. "It's easy to sit there and bitch about a crappy looking transfer. But what are YOU gonna' do about it, huh?" 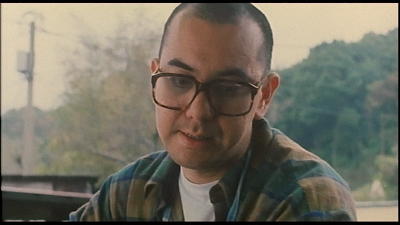 Obviously none of these transfers look perfect, all being from the same worn out 35mm telecine, but I do believe this beats out the competition by a wide margin. Wong's face looks almost human in color, his shirt a dingy shade of white, and the contrast hasn't gone completely haywire - you can still see the power lines in the background and everything. It's as good as the film has ever looked, and with the Hong Kong release being 4:3 pan-scan after the titles, odds are it may never look much better on DVD.

There's a lot at play here: cropping, scaling, color correction, derainbowing, deinterlacing, deblocking, and even re-graining. I know, I've complained about it as a practice in the past, but my beef is with people who start with perfectly good film, degrain the hell out of it, and then add it back in later. Why would you do that? Why? I'm starting with a degrained and heavily compressed source to begin with, so adding a little bit of luma dithering isn't going to hurt anything; if anything, it's going to hide some of those ugly compression blocks by helping them blend in to their not-so-static surroundings.

Let it be said that while I have nothing against Hannibal Rising - I haven't yet seen it, so I certainly won't condemn it - it bears no more relevance to this discussion than does The Untold Story 3.
at 12:02 AM