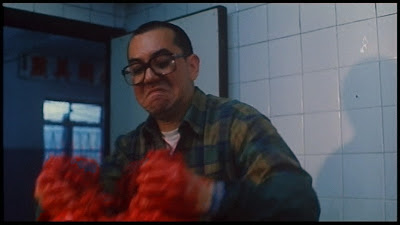 If you see something horribly awry with the raw meat in Wong's right hand, congratulations! You've just earned yourself a fresh steamed meat bun!
The Untold Story DVD is really a piece of work. Non-anamorphic, composite artifacts, heavy DNR, wonky color values, cranked contrast, and rampant film damage. I thought to myself, "at least they didn't try to remove the film damage and just fuck it up worse". Silly me, of course they did! 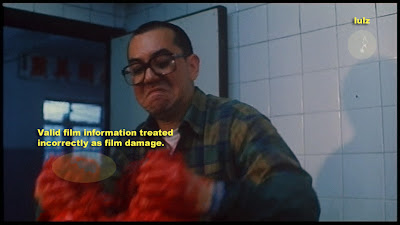 As you can see, the automated film damage hardware Tai Seng used wasn't able to filter out a drop of glue used to physically restore this bit of juicy footage, but it was more than capable of finding a fast moving part of the original film and needlessly replace it with an earlier frame. As John K. once said, "Wow! It's the wrong colors and everything!" The little black hole in the middle of a tile also plays peek-a-boo during this shot, disappearing and reappearing whenever the scratch repair assumes it's a spec of dirt on the film. It isn't, but I'll admit that it sure looks like one.

This is exactly why I've been nervous about any sort of automated scratch repair. Like a blind pig tripping over a truffle, you'll occasionally get rid of scratches and dirt and whatever else litters your source print, but odds are you'll fuck up anything that moves in the process. And no, the above artifacts aren't all that rare. If you start finding them, you may never stop, so observe, laugh, and for the love of God don't try to find any more. You might hate what you see in no time.

That said, I've seen some very impressive results coming out of some automated AVISynth functions, so I've decided to experiment further and see what's possible with a little careful tinkering. I've got one animated candidate in particular which could use a film damage face lift, but apparently I've managed to record the damn thing in mono thanks to an overpriced cable popping out when I wasn't paying any attention. Seriously guys, never use anything but the stuff on Monoprice.com - each and every one of those cables kicks ass. Wish I'd known about them before I spent a small fortune at Radio Shack...

Expect more anime LD recordings to happen in the very near future.
at 11:51 AM