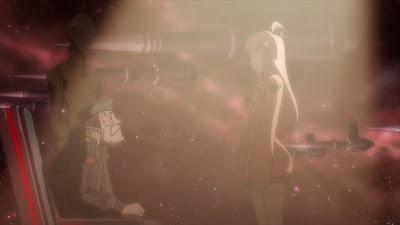 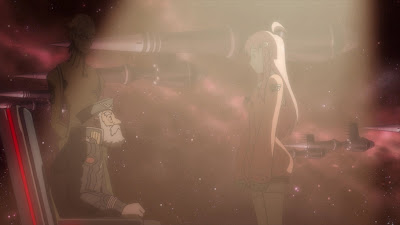 The same screenshot downscaled to 480p, and then upscaled back to 1080p.

Having watched the Bandai Visual Blu-ray release of トップをねらえ 2! 劇場版 / DIEBUSTER: THE MOVIE, I was impressed by the stellar technical animation for an OVA dating back to 2003-2006, but also slightly disappointed at how soft everything was for a 1080p release. I think the above comparison speaks for itself in establishing that this was Bandai Visual's second NTSC upscale on "High Definition" Blu-ray.

I've been on the fence about the Gunbuster vs Diebuster Gattai! Blu-ray box set. $100 MSRP for 190 minutes worth of two compilation films and a bonus disc is hardly chump change for a US release, and while I didn't mind Diebuster as a feature film, the original series falls apart in its' shorter, singular edition. I want them both in High Definition with lossless 5.1 audio, naturally, but I'd much rather have the even more outrageously overpriced OVA cuts ($70 for Gunbuster/$120 for Diebuster), which are only available on DVD. What is a broke OCD videophile to do?

Sadly, $100 (by which I mean $60 at Amazon.com) is still a damn good deal next to the 155 minute long $150 Yukikaze collection, or the $50 bare-bones Akira disc I already own. While the pricing was outrageous, Bandai Visual's AV and packaging quality was always top notch, though I never felt that the latter quite justified the former. Bandai Entertainment's first BD release (Ghost in the Shell: Innocence) was a bit of a clunker, but word on Sword of the Stranger gives me hope that all upcoming Bandai Blu-ray will still be high quality and not cost an arm and a leg - just one or the other.

Much as I was against the process of releasing "quasi-HD" material on Blu-ray when the resolution of the source never surpassed what standard DVD could provide, Diebuster actually makes a great argument for the format's use on SD material. The problem with DVD on HD setups has less to do with the lower resolution, and more to do with the relatively low bitrates and archaic MPEG-2 compression that exist as the only option for DVD video.

Having already ordered Final Fantasy VII: Advent Children Complete, clearly I've just about given up on my "no upscales" policy.
at 5:25 PM

I figured this would be an upscale, but I think Naiera or someone a while back said they did a DUP test that showed it had around 600 or 700 lines.

PS: Damn, I neither realized you had a blog, nor realized it was this awesome. Spent way too much time at work catching up on past entries. LMK if you want to do any trades, Thanatos has probably hooked you up with a bunch of stuff from Japan already, but I don't think he has a Discas account (they also have an adult section, not sure if you can browse it without an account though).