Love It To Death 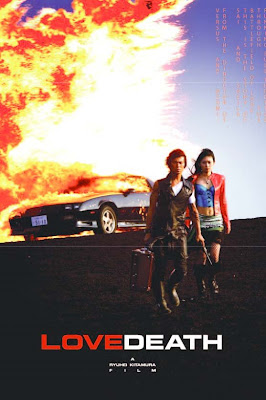 The fact that this blog title has absolutely nothing to do with Alice Cooper is nothing short of staggering.
I've spent 2 days fixing up the translation on the first half of Ryuhei KITAMURA's 2006 Yakuza driven black comedy LoveDeath. For me, that's business as usual. Getting a heaping pile of drama on top? Now that's a twist!

I was a little surprised to receive a combination of insults and demands, directly from the woman who translated a couple hundred French subtitles into English, not to do anything with "her" script. I'll point out now that she only translated about 300 lines out of nearly 2,000 subtitles. This will make the next paragraph even funnier.

I'll spare you every gory detail, but evidently she took a grave offense to me putting "Kentai Films Presents" in the DVD subtitles of This Transient Life. After being called everything from pretentious to the Miramax Incarnate, she even went so far as to release her crappy translation and claim that I hatched a nefarious world-dominating plot to steal all of her hard work and claim it for our own. Never mind that 85% of it wasn't hers to begin with, and that I had every intention of giving her and everyone else who worked on this project full props for their blood, sweat and tears. Forget that the third party who sent me the script told her up front that he was sending it to me for DVD patching. Oh no, this was all me putting a Svengali spell on someone so I could revel in the glory of subtitling a yakuza comedy for free. IT ALL MAKES SENSE NOW.

Care to see what fantastique translations you can expect on the new Frenglish script?

At what moment did my life changed?

It's humiliating! It cuts your ears!

"The money has been stolen and is not found yet..."

I could go on, but you get the idea. Frankly, these subtitles suck dried amphibian balls on sliced stale baguette in any language, and I'd have been embarrassed to release a DVD with incomprehensible bullshit like that.

Whatever. I hope she had fun releasing that Frenglish script on DVD. If she's too good for my (much needed) help, then fuck her. There just aren't words to describe the violent crazy that drips out of this chick, so I've decided to simply let the situation dry up and flake off on its' own.

I'll let you guys know when the less-shoddy English script is ready. I'd love to see it attached to the JR2 eventually.
at 4:09 AM

Bravo kiddo! You finally found a place to shout. Feeling better? A patch is meant as technical help, not reworking subs. K never told me this about you. Reading your posts, nothing will ever be perfect for you (unless you redo it) and that's why you feel the need to put your nose in. If they suck, let me be 'laughed at' by the people who grabbed it.
Why should that be your problem anyway?! I surely did much more then those lines but wanted Ib to be praised more then me cos he surely spend a HUGE amount of time on this. His srt was another version (the long dialogue one) and often didn't fit with the french sub nor french dub which I had to check too. If it's about the way I write, sorry if it doesn't suits you but know that I'm fully bilingual (I live in a city that speak both French and English, so you can guess where). I wander what magic you could of done with a french srt? Would you translate better? NO. You can rework English but anyone can. I could of ask any person fluent in English if I wanted to. But you really did wanted those subs did you? And now you will redo them soon enough and no thanks to me or Ib, but thanks to YOU! YOU'RE THE PRO! A 25 year old kid... You can't profit of other people's translations unless they have given you their permission, in my case, I never did. I was naive to trust K, I asked him to do the patch since he provided the R2 release. He was part of the 'team'. Much later he told me you would do the patch. A patch, again, does NOT equal full reworking of subs and when I got to know this important factor, sure I got pissed. My translation is worse to you then those old HK bootlegs, right? Give me a break here. I wish you NEVER had these subs from K in the first place and none of this would of happened. You want to make me regret doing the subs? Well, I don't. I regret having to deal with you though. Adios.

Mimiko, the only person I've seen acting like a "kid," is you. The moment you heard that Kentai questioned a few lines of your translation, your ego has been so damaged that you've decided to sling his name into the mud.

Instead, you have to slander his name all over whatever piece of net you can find, and even stalk him to his personal blog, just to CONTINUE THE DRAMA. Do you see what a dramawhore you are? Do you really enjoy all that negative attention?

Honestly, I would never work with you again, if I were "K". Either way, "K" asked you to do the translation for HIM. Whatever he does (or has others do with it) beyond that point is none of your business, and is your own fault for working with others. If you don't want anyone to fuck with your stuff, then do everything yourself and don't include the middle man.

All in all, get over yourself. You're not some god of translations. I probably could have done as good a job with my one-year knowledge of french and babelfish, and at least I would have had proper english.

Sorry Kentai, replying here since she made her profile private. Is she scared someone will call her on her bullshit?

In my opinion you are not right. I can prove it. Write to me in PM.

It you have correctly told :)