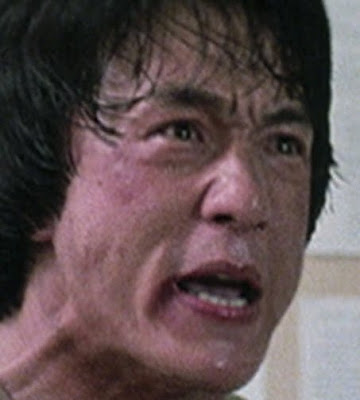 Jackie Chan is not amused by this bullshit.
(Cropped, but not resized or processed in any other way.) 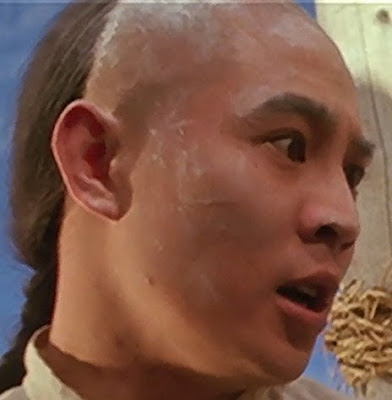 Jet Li is at a loss for words.
(Cropped, but not blah blah blahed.)
What's really depressing was that Kam & Ronson/Fortune Star released a fantastic transfer on Bruce Lee's THE BIG BOSS, and a slightly less impressive - but still "Full HD", as they say - restoration on FIST OF FURY. It gave me a little bit of hope that, after 25-0dd years of Hong Kong producers not bothering to properly care for their films, Blu-ray would finally be the turning point in the home video preservation of the great wealth of Hong Kong popular cinema...

...and then, POLICE STORY (top) and ONCE UPON A TIME IN CHINA (bottom) came out.

In the case of Police Story, it's just a goddamn upscale. Literally, someone put the 480i NTSC master, fit for no more than a competent DVD release, and put it through a hardware scaler board to make it 1080p. And yes, putting the old Fortune Star DVD in any decent upscaling DVD player would have effectively done the exact same thing.

This has happened before, I'm afraid, with Escape From New York (UK) and Traffic (US)*. The only positive thing I can say about 480i upscales is that the higher bitrates and newer codecs mean the audio and video are slightly nicer, solely because they don't have to worry about typical lossy Dolby audio encoding, or MPEG-2 macroblocking. The actual difference is pretty minimal though, particularly if the DVD was well made to begin with.

*Digital animation from before the HD revolution will continue to be upscaled rather than "Native HD" transfers, but since the master format of most TV shows and OVAs from the first half of this decade are NTSC Digibeta, it's pretty much upscale or bust.

Both of these films were shot on 35mm, which should have well beyond 2k's worth of information at the negative, so upscaling Police Story when a new "Real HD" transfer would have been as simple as pulling the negative out of storage and performing a new HD telecine, is really the definition of unacceptable. Shame on you, Fortune Star and Kam & Rossen...

As far as Once Upon A Time In China goes... I can't honestly tell if it's an upscale or not, though I can say without batting an eye that it's god-awful. The entire film has been drenched in this nasty grain reduction filter that literally makes the whole thing look like it was shot with crayons and colored pencils rather than with celluloid. Seriously, check out Li's hair and tell me that shit looks even the least bit natural!

My money is on it being a 480i upscale that was tinkered with at the upscale stage, but having seen evidence of shitty blurred transfers like Tremors, Evil Dead II, Salò, and Gangs of New York, I guess anything's possible...