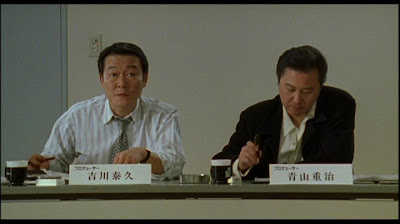 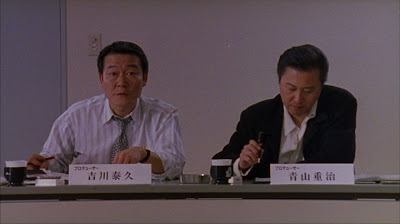 Takashi MIIKE's international break-out hit Audition has had a painful history on home video in the US: the initial Chimera DVD from June of 2002, while progressive, was non-anamorphic and mastered from what looked like an unused Japanese 35mm release print. The contrast was hot, the colors boosted, and there was occasional film damage, but at least we could rest at night knowing that Chimera got the same transfer used by Universal Japan and Mei Ah of Hong Kong, so it's not like a better alternative was just waiting for them to pay more for it. An edited "R-rated" cut was also released missing a few minutes of footage, though seemingly it was regulated to the rental market where it belongs.

Extras were encouraging, but deeply flawed in their presentation; a lengthy director interview and a 2-reel commentary are excellent on paper, but for some head-slappingly bad idea I just don't understand, Chimera dubbed them in English instead of subtitling them. Guys, for real now, when the FILM ITSELF isn't dubbed, the extras probably shouldn't be either. Other extras included a tour of the Egyptian theater where (I assume?) Chimera was based out of, sort of a look into the secret lair, and original trailers for the film along with upcoming releases (including Miike's CITY OF LOST SOULS) rounded out the on-disc extras.

One thing I can't fault them for was the gorgeous digipack, complete with a mini-booklet full of Miike related liner notes from Chris D, author of Yakuza Eiga: An Encyclopedia of Japanese Gangster Films 1956-1980. 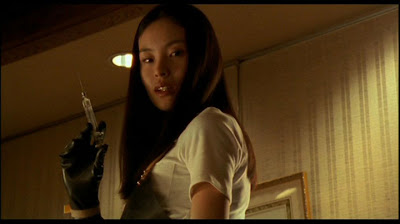 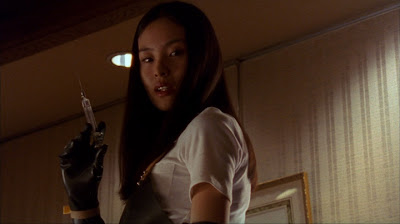 June 2004, Tartan UK comes out with their "Special Edition" to replace the heinous hard-subbed release they'd rushed in September of 2001. They come bearing a brand new PAL transfer that they seem to have commissioned themselves; it was anamorphic, from a nicer film print, and was generally considered the "reference" transfer Audition deserved on DVD by those who cared. It also featured an exclusive Miike interview, though I think it was a generic "career" based affair that Tartan basically put on all of their Miike titles, as well as a Miike trailer reel and liner notes by Joe Cornish... a British comedian. (What?)

Lionsgate bought the rights from Chimera, and released their own DVD in August of 2005. The good news was the DVD was finally anamorphic, ported over all the old extras (sans the trailers), and even included a new fluff piece on it being one of Bravo's 100 scariest movie moments, and a fascinating interview with Ryu Murakami, the author who wrote the book the film was based on. Unfortunately, the transfer they used was that glorious Tartan PAL master... as a PAL > NTSC conversion. The sad part is they could have quite easily transferred the PAL material to progressive NTSC transfer, if they'd had a clue what they were doing with it. 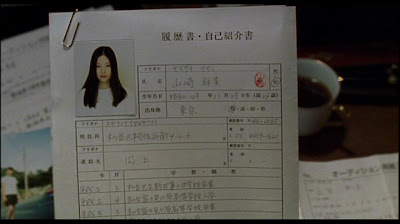 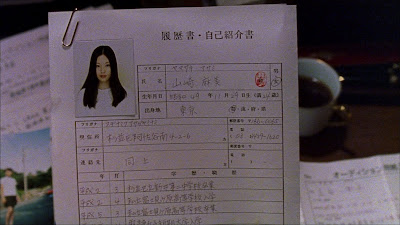 So now Shout! Factory comes out with their own 10th anniversary edition, in both DVD and Blu-ray flavors. Owning both of the prior R1 DVDs, I'm excited to find out what I'm getting myself into, and it looks like a lot of care was put into this release... so I'll start with the good points, and no, none of the extras are dubbed in English this time:

*A new brief introduction to the film with Miike.

* Booklet with notes from Tom Mes, author of Agitator: The Cinema of Takashi Miike. (Why the hell don't I own that book?) 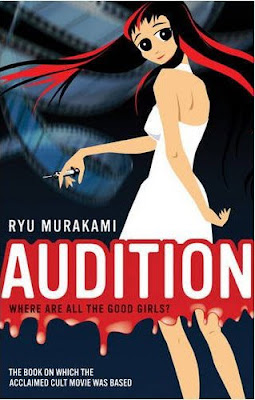 As much as I want to read this, I think if I EVER saw that ugly-ass cover staring back at me I'd just start stomping on it...

Missing are the Ryu Murakami and Takashi Miike interviews found on the Lionsgate releases, though honestly I won't shed a tear for Bravo's 100 Scariest Movie Moments being left on the cutting room floor. There's no need to keep the old dubbed commentary, since the feature length track more or less makes it irrelevant.

As far as the new transfer goes, I'll let Cliff from Shout! Factory fill us in on the gory details:

The Chimera release was a master from a print. The Lionsgate release was done with the Tartan PAL master and the new Shout release was master(sic) in HD from the inter-negative. As you may know, prints are struck from the inter-negative, so that is why you are seeing the same markings. The film company wouldn't send the negatives to the U.S. so we had to use the inter-negative.
Well doesn't that just beat all... most HD transfers are created from a new Interpositive, which is a print made directly from the camera negative (or a "first generation" print). Even better, but usually reserved for Hollywood classics, is scanning the negative itself (OCN = Original Camera Negative). What we're seeing on this release is a "second generation" print made from an Interpositive, which is still better than a theatrical print as we've seen before, but not ideal. I have a sneaking suspicion that the Tartan transfer was made from an Interpositive and telecined in Japan at their request, but odds are I'll never know.

The good news is the new release seemingly blows all prior DVD releases away - both in terms of extras and audio-video presentation. The film has always been presented in 2.0/5.0 in Japan, so I can only assume that's the original audio mix, and while the transfer is full of minor print dings and cue marks that could probably have been fixed with some digital clean-up, the only way to truly get a sharp, damage-free, and relatively grainless transfer is by going back to the negative and starting there, which it seems the Japanese rights holders don't want to do. Japan STILL doesn't have a 16:9 transfer of this film on home video, so I wouldn't hold my breath.

The bad news is... well, look at the screen shots and judge for yourself. The new Blu-ray transfer seems to have a red push, and while I can't say that I know what Miike's timing intentions were, I can say that the film's color timing looks slightly less natural than any prior incarnation. See HERE for more screenshots, and pay close attention to the color of the sky and skin tones. (And, yes, that's where I stole everything you see above.)

While the middle shot of Asami from the finale is a color timing improvement, the shot of Shigeharu and friend at the audition looks... well, it looks friggin' purple to me. But again, we're dealing with an Internegative as the source, and color anomalies that can actually vary reel-to-reel, depending on what film stocks were used through the process. This is exactly why full blown restorations try to go back to the original negative whenever possible. I'd wager that a newly printed and properly timed Interpositive would fix all of the color issues, but until Japan gets interested in making that happen, this will be as good as it gets.

That out of the way, the 1.78:1 frame seems to have opened the top and bottom matte ever so slightly. The grain is very unusual, being heavy particularly in highlights, and without containing much fine detail, but I'm willing to put that up to a combination of the original photography and the Interneg source before I would any severe digital manipulation. Then again... 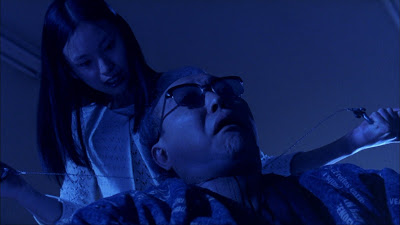 I see plenty of compression artifacts and some globby chunks of what were grains once, but nothing resembling actual celluloid like the other full-sized shot above. This looks like some pretty heavy median filtering, as opposed to the expected temporal DNR, which basically just blurs out the entire frame. Does it still look better than any DVD release? You bet! Could it look even better with a little TLC? Yeah, probably. But this seems to be the position I find myself taking on damn near every Blu-ray or DVD title I buy these days...

Being a crazy Audition fanatic I may keep the Lionsgate DVD, just for the old extras, but I won't hesitate to buy this Blu-ray either. Now, if we could just get Tokyo Shock to get the lead out on that ICHI THE KILLER release they promised...
at 1:39 AM