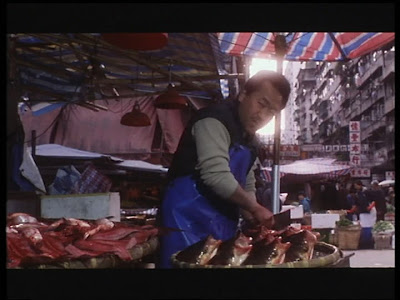 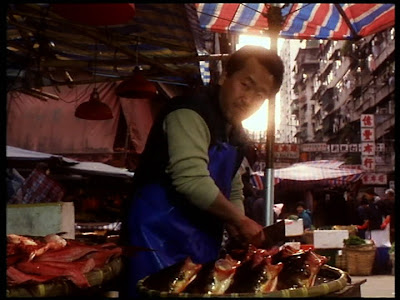 The CAT III rated VCD release of 血戀/TRILOGY OF LUST is NTSC, has burned-in English and traditional Chinese subtitles, and comes with both the original Cantonese and Mandarin dubs. While I can't find an actual runtime, everyone and their mother agrees that the Cat III edition is edited, so how much of it (if any?) remains - and wither it features any "Bonus" footage - I don't yet know.

The uncut DVD is 87:57 PAL (about 92 minutes NTSC), is an old pan-scan transfer with no optional subtitles, and only has German audio. It's the same composite transfer that was used for VHS, and as you can imagine, it does look pretty damned awful, with dot-crawl, film damage, and compression artifacts mucking up pretty much every shot of the film. However, the fact that it features every second of hardcore footage - not mere inserts made with different actors, but genuine penetration with semi-legitimate Hong Kong film stars - makes it worth keeping as the only uncensored print available on DVD. Not speaking a word of Deutsch I can't say having the film dubbed is a plus for me personally, but at least the German dub doesn't sound too bad to a non-speaker; I can tell you from experience that Trilogy of Lust II is much less terrible in German than Mandarin, for whatever that's worth.

I suspect that somebody in Germany still has the uncut 35mm elements and could do a new transfer, but for that to happen somebody would have to think it's worth the several thousand euros that a proper 16:9 restoration would cost. I just don't think that'll happen, not unless Quentin Tarantino goes completely insane and buys the negative personally. If the guy can get What Have You Done To Solange? restored out of his own pocket, anything's possible.

I can always just get the Universe Laser VCD for the slightly ridiculous price of $10 plus shipping, though I've confirmed that Universe Laser also released a Laserdisc in the mid 90s. Unfortunately, finding any information on home video releases for this film is sort of like pulling teeth from a walrus; I'm not saying it can't be done, but when you're ready to give up nobody will blame you. It seems that there's also an uncut 4:3 English dubbed print with Portugese subtitles floating around at Video Search of Miami for $20 plus fondling charges, but odds are it's from a PAL VHS, so the quality could be worse than the already uninspiring German DVD I have now.
at 7:03 PM