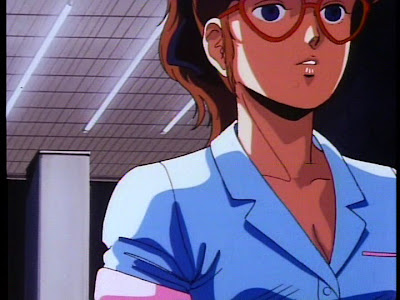 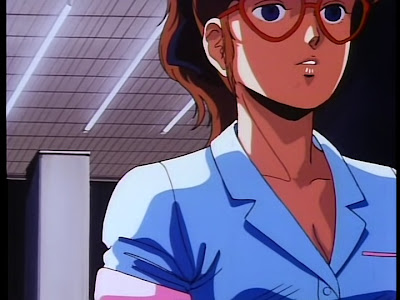 Upcoming Kentai DVD Transfer
Holy friggin' crap!
There's currently no filter to re-seal my rotten LD, so I'm forever stuck with the banding and chroma noise filled source recording for Maryuu Senki, but the constant chunky gridding artifacts, severe rainbowing, print damage and even LD dropouts seem to be a thing of the past with this nearly magical chain of filters I've got going on. While the background has been slightly softened, I can't pick out any actual outlines that have gone missing in the complex gridwork of the opening scene, so I think I've finally made peace with using high quality DNR filtering on composite masters. The fact that I finally have a decent deband filter I can chain with the DNR to is a particularly big plus, since on some heinous looking VHS transfers I found that heavy temporal smearing did some good things, but the blatant banding and posterization was simply more than I could stand.

There is a minor catch in this setup, one that if I don't mention I doubt anyone but the most eagle-eyed OCD types would ever spot anyway... so maybe I won't. Having combed over every scene in this miserable rotten transfer I know the lesser of two evils when I see it, so as much as I'll regret a few minor mishaps that happen to pan shots, I know that realistically it's for the betterment of the whole. Besides, I could always mark them out and then re-encode them separately without the damaging filter involved, if it REALLY bothers me.

I've considered adding a thin layer of digital grain to the resulting transfer, but for various reasons may skip it this time. My goal is to fit all 3 episodes on a single layer DVD, so an average bitrate in 6.0 MB range is a must, and literally adding noise to a relatively low bitrate DVD like that is just asking for a level of compression related smegma that I could completely side-step with a little careful planning. Remember that I've given up using vertical filtering and all of that crap, so I'm still preserving more of the "remnant" noise than most people in my position would. This may change as I experiment further with Grain Factory, since I know it has a wide range of possibilities, but I'm just not yet convinced that this 20 year old LD transfer NEEDS to look like "film". It'd be nice, of course, but it's not, and try as I may to make it look like a fresh telecine from a 35mm IP, it just isn't possible.

So, want to see how that nasty rot-based banding in the final scene turned out after some vigorous digital scrubbing? 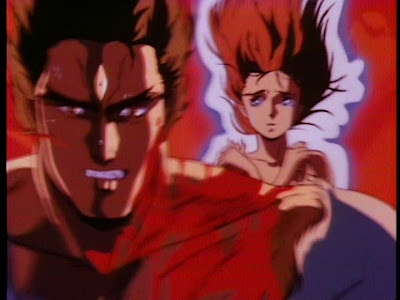 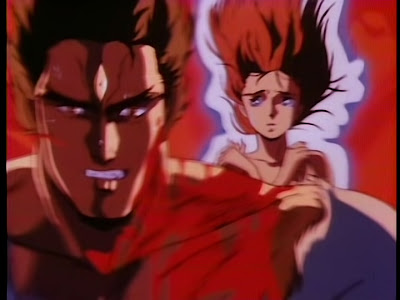 Rotting aside, of course, the latter two episodes actually look slightly worse from a technical standpoint. MARYU HENJO has some slightly heinous EE, severe rainbows, and some really strange looking moire/gridding patterns which remind me of the LD rot dropouts found on the first episode... heck, they may be just that, but the disc didn't literally melt in my hands to clue me in that it was on its' last legs. The moire leads to funky gridding patterns, and they're just not something that DNR alone can destroy due to the fact that they literally crawl up and down the screen. 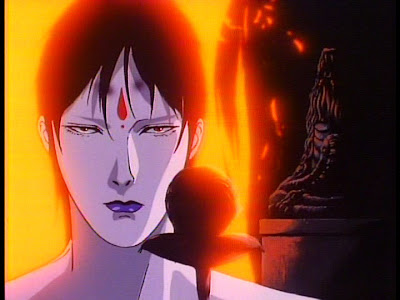 MARYU SHINDEN lacks blatant moire and seems to have the least film related problems, but it has one of the thickest layers of chroma noise I've ever seen in my life. It's like the harsh grain of 16mm, but with all the colors of the rainbow! 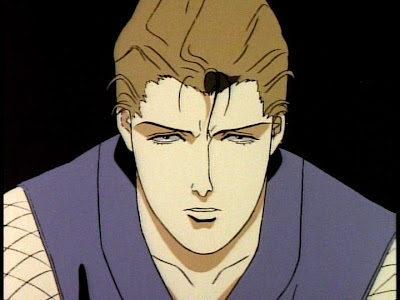 I've seen so much worse, but I feel like I can still make a pretty big difference. Unfortunately the highly trained team of Kentai Films Ferrets who were supposed to perform extensive A/B comparisons seem to have chewed out of their cardboard bunker and escaped to wreak havoc through New England, so I'm back to pretty much being a one man show. When I'm satisfied, you'll know.
at 10:56 PM