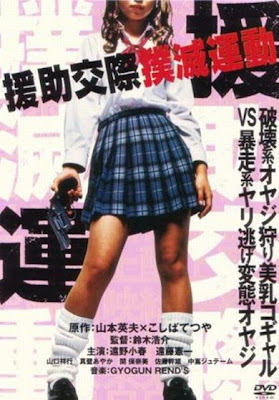 Things may have been pretty quiet on the Kentai blog over the last few weeks, but don't assume that means I'm not hard at work. There's a trio of projects I'm knee deep in, and all of them pose unique challenges. I've already talked your ear off over IO, EMMANUELLE so all I'll add to that is the fact that the progressive PAL transfer is done, and I'm checking over the subtitles, doing my best to fix up a few bizarre translations, and breaking up those headache inducing Wall-O-Text(TM) style subs as best I can. Televista sure isn't making it easy, but I'll manage.

The second project is for all of you ENDOU Kenichi fans out there. 援助交際撲滅運動/STOP THE BITCH CAMPAIGN was an exploitation film released in 2001, based on the YAMAMOTO Hideo manga of the same name - yes, the very same Yamamoto who also created 殺し屋１/ICHI THE KILLER. The original manga took its' inspirations from the Japanese media reaction to Enjo-Kousai, or "Compensated Dating", in which teenagers used so-called telephone clubs to arrange meetings to prostitute themselves for money or gifts, a national shame/pass time that has only gotten more prolific with the internet and cell phones now being common place. I'd like to think that pimpless prostitution is the most noble and progressive form yet, but Japanese police and age of consent laws beg to differ.

The story swaps focus between a team of teenage prostitutes who decide to go "Geezer Hunting", setting up dates only to abuse and rob the potential Johns, and Endou and co. who decide to teach those whores a lesson by fucking them and then leaving without paying. Both sides are cruel hypocrites who twist their own selfish versions of morality around their violent acts, and unlike Ichi, the film doesn't seem to have a lot to say, other than "stand by your own"... unless "your own" that includes a cross dressing and dildo-toting Endou Kenichi. Seriously, if you ever see that, just run. Far away and as fast as you can. It's really a straight up frothy glass of offensive sex, violence, and rock 'n' roll held together primarily by Endou - here at his raving mad best - raping virgins while wearing nothing but Rocky Horror Show make-up and spouting regulations on how to best "convert" the nation's youth of selfish whores into upstanding citizens.

The criticism that the film doesn't have any likable characters to root for is a fair one, but I think it's a blast, and was excited to find out that it was released with English subtitles in Hong Kong... until I found out that Unicorn Entertainment was handling it. Unicorn had released the 2005 sequel - you know, the one starring AOI Sora, so it kind of beats the original by default - with subtitles in the deeply rooted Hong Kong tradition of Chinglish. The process goes something like this:

* Translate the Japanese line "Nice to meet you! Isn't this weather great?" into Chinese.

* Translate the Chinese line "It's good meeting you, and in such warm weather too." into English.

* End up with "Nice warmer weather to meet us in!" as the English subtitle on the DVD.

This tradition goes back to at least the 1980s, when Hong Kong would release hard-subtitled Japanese films with simple Chinese and English subtitles on video, but a combination of bootleg product and the simplicity of feeding a script into Babelfish has left jaw-dropping results, like incomprehensible English subtitles for films that are already in English! One of the most hilarious examples of this is probably RIGHT HERE.

One of my regular collaborators is hiring me as an editor for this project, but looking over the original script and the WIP Kentai-Approved translation, I might as well be translating half of this from scratch. Not that I mind, understand, it's just mind-boggling how nonsensical some of the HK subs are. I'm actually paused at a truly horrific sequence that I'll share with you all once it's done.

One of the interesting points, though, was that the guy who's hired me to do this specifically requested that the subtitle "Stop The Bitch Campaign" not actually be used in the film. His argument is that it's not (at all) an accurate translation of Enjo-Kousai Bokumetsu Undou, and he's right... while it may capture that certain hypocritical and tasteless aesthetic of the story, "Bitch" isn't an English word for prostitute. This isn't nearly as bad as the thousands of Hong Kong films who's English and Chinese titles literally have nothing to do with one another, but it's a good point all the same.

The major place I was considering using it (before he suggested I shouldn't) it was during the various "Enboku Code" sequences: Enboku is a made up word based on the 援 and 撲 kanji, and while it has no literal meaning, even in Japanese, it's meant as an abbreviated version of ENjo-kousai BOKUmetsu undou. Having no literal meaning, I thought translating it as "Bitch Campaign" would be appropriate, but I may yet settle on a similar nonsense word like "Eradi-Camp". Like I said, still a work in progress that needs plenty of reconstruction before it makes even the slightest bit of sense in English.

Finally, we have a shot from the third project that's keeping me up at night... think you can guess what it is? (If I've already told you, that's cheating!) 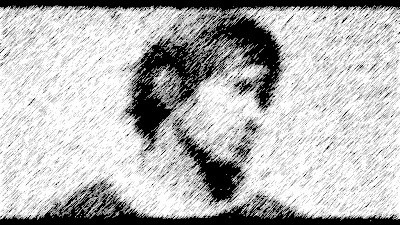 This will be a unique project for me, one that involves creating an English dubbed version of a film rather than a subtitled one. Unfortunately, the two prints I'm working with couldn't be any more different, so I think I'm going to have to start playing with some brand new software to make this work. Alternately I could be a lazy fucker and just buy a DVD-R version that some guy has already made, but judging by the fact that he's had to recall his initial release for synch errors, not to mention the fact that he's converted his source from PAL to NTSC, would simply add in all sorts of new potential problems for the materials I'm currently working with.

I'm hoping this mystery project goes well, since syncing separate audio tracks to different prints is the sort of thing I really should add to my list of stupid human tricks.