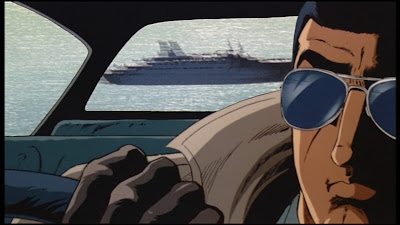 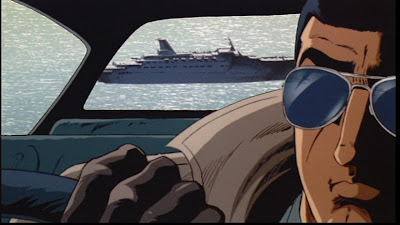 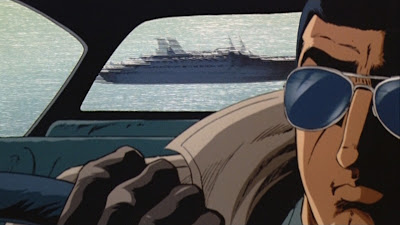 The 2005 Urban Vision US release is non-anamorphic down conversion of the Pioneer 16:9 remaster, features clumsy-looking English titles overlaid across all Japanese text, and is interlaced seemingly just to add insult to injury. As you can see, it's softer than the other two 16:9 transfers, but not nearly as bad as I had initially feared. Urban Vision has, as a rule, always given spectacular encodes of terrible source materials, and GOLGO 13: THE PROFESSIONAL is no exception. Too bad it features all of those god-awful looking English overlays... 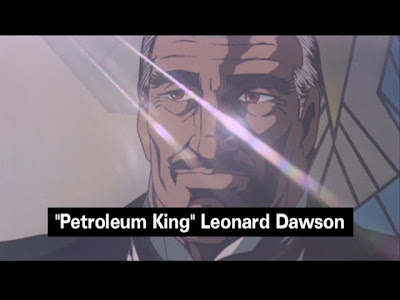 Seriously, is it 1995? 'Cause I can't think of any other excuse for that ugly-ass Amiga graphic mucking up my kanji.

The 2007 British "Secret Agent Edition" from Manga Entertainment is, as expected, an NTSC>PAL conversion of the Japanese transfer. This invariably leads to interlaced ghosting/feathering, and unlike the US release this will never go away with proper deinterlacing: at best, you'll have blurred trailing after-images, at all times. The re-edited English credits and on-screen subtitles are the same as those found on the Urban Vision R1, but at least the Brits were lucky enough to get a 16:9 transfer, which is more than I can say for us in Yankerville. The frame is opened slightly when compared to the other two transfers, but I wouldn't get all fussed up over a few pixels worth on any given side. 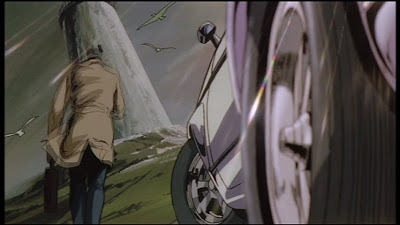 The 2001 Japanese release from Pioneer, though progressive, has a pretty blatant problem with aliasing, which becomes quite easy to spot during slow pan shots or limited animation sequences: check the coat collar or gloves on the Japanese shot to get an idea of what I mean. Each frame has a different level of jagged edges, but it never goes away completely, and is one of those artifacts that sadly looks worse in motion than it does in stills. The PAL transfer will have to be deinterlaced, which can (and will) lead to aliasing during motion, but the Japanese release looks jagged even when it's not doing anything!* That said it's sharpest and has the best MPEG-2 compression of the bunch, despite being the oldest by a wide margin, so even with this difficult to ignore flaw it's the best looking transfer I've seen for this film yet.
*"Jaggies" like this are a shockingly common problem on HD remaster sourced anime DVDs from the last several years, including Martian Successor Nadesico, Neon Genesis Evangelion, Card Captor Sakura, Revolutionary Girl Utena... the list goes on and on. The fact that the UK release managed to avoid that harsh aliasing does suggest that this was some sort of HD>SD downscaling problem rather than a problem with the HD masters themselves, though as many of these titles have since been given brand new Blu-ray minded remasters, I guess that becomes fairly worthless trivia. 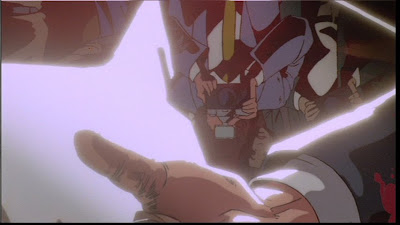 The Japanese release also has some weird "pulsing" data on the left and top of the frame... sort of a digital version of that garbage hiding at the bottom of VHS tapes. It's difficult to spot in stills because it changes from black and white, to pulsing dot-crawl like patterns, to solid black or solid white... I have no idea what it is, I just know that neither of the other two transfers on display have it, and once you notice it, you can't un-notice it.


In terms of extras, the Japanese release from Pioneer comes in dead last... unless you're fluent in Japanese, anyway. Aside from an extensive collection of character designs, you get a commentary track with the film's producer Mata YAMAMOTO and director Osamu DEZAKI, but short of your Nihongo being a hell of a lot better than mine you're not likely to get out of it.

The Japanese disc comes with both the original mono mix and a brand new 5.1 surround track. The mono mix is perfect just the way it is, and it's been preserved with all the hiss and lack of dynamics intact. The 5.1 mix is working from less than ideal sources, and the sound effects have the nasty habit of echoing slightly from the center to the side channels, but dialog and the score sound great, even without a lot of forced directionality. It's a pleasantly natural surround remix, and I can't say I have any complaints. Some of the dialog has been just slightly over-saturated in hiss-removing DNR to be a 1983 mix, but largely the mono mix is just there for crazy purists (like me!) to fall back on out of habit.

The US release includes a new interview in English with producer Mata Yamamoto (3:44), an all too brief collection of colorful promotional stills, and a "new" Urban Vision trailer for the feature - along with the usual shameless promotion, naturally. Their prior release of Vampire Hunter D (...or was it Wicked City? Maybe both?) included the Streamline trailer, but it's sadly absent here.

As far as audio mixes go, Urban Vision is really a mess. Not only does the mix have a more obvious echo and a more harsh, analog-sounding buzz that permeates every part of the mix, but the opening/ending credits music has been replaced with a slightly generic sounding bit of jazz. It's certainly no replacement for Cindy Wood's catchy James Bond inspired PRAY FOR YOU, anyway... The English 2.0 mix, the vintage Streamline dub with the opening titles restored (sort of) sounds just fine. The 5.1 mix, however, is the worst sort of 5.1 mix that makes every line of dialog echo. Just awful, terrible stuff, and it answers my age old question of wither or not the echoing on Urban Vision's release of Vampire Hunter D was the result of their ham-fisted remix or the original production.


The Manga UK release includes the original mono (Japanese) and stereo (English) mixes on disc 1, as well as both of the 5.1 surround mixes on disc 1. Unlike on the Urban Vision release, the UK Japanese tracks aren't full of nasty echoing hiss and include the original theme songs. Why? Because TMS hates America even more than they hate the rest of the world. Hey, prove that I'm wrong; what other even somewhat justifiable reason could there be?

Matching the Japanese release is the inclusion of a new English language commentary track with Jonathan Clements, best known by otaku for having co-written The Anime Encyclopedia: A Guide To Japanese Animation Since 1917. He wasn't directly involved with making Golgo 13, and he admits a few times that he isn't even a huge fan of the franchise, but he's surprisingly interested in exploring the history of the franchise and even explaining all of the gags that titles like MIAMI GUNS and KOCHI-KAME have made over the years to Duke's now iconic personae. He might not enlighten you if you're already a big fan, but for someone like me who's only had a passing interest in the film - and you can occasionally resist the urge to yank that little stick you just know is lodged up his bum - it's largely worth the 90 minutes. Also included are Manga propaganda, who cares, blah blah blah.

The UK release also comes with a second disc, including both the Yamamoto interview and a pair of exclusive DTS tracks in both Japanese and English (and even more propaganda for one of those ugly Hellboy cartoons). I'll give the Manga Entertainment Devil his due; these mixes are both louder, and clearer than the 5.1 Dolby mixes available elsewhere, though if anything, it only further highlights how terrible the English 5.1 mix was to begin with. Still, if you're into loud surround mixes, this is it.

At the end of the day the Urban Vision release is just about worth the $5 it'll cost to pick up used, but for an extra $10 you can get the UK edition that's better in every single measurable way. The conversion-ghosting is a damned shame, but the increased resolution, surprisingly enjoyable commentary, and vastly superior sound mixes more than make up for it. The UK release even comes in nicer cover art, petty as that may be to consider worth spending more money on. If you can't play PAL/R2 DVDs, well, blow it out your face. You clearly have a computer, and you, too, can steal DVD Region Free just like everybody else.

The Pioneer Japanese DVD has recently been usurped by a re-release to coincide with the 2008-2009 TV series, and includes 10 minutes of assault-rifle themed bonus footage ("Inside of M-16") and the original theatrical trailer, but it lacks the 5.1 track, commentary and character sketches. It also doesn't say "Remastered" on the cover and is yet another single layer DVD, so I assume it's not been. For the $45 price tag it's only worth picking up if you demand to see the original credit sequence, or if you absolutely despise NTSC<>PAL conversion issues. Still, with this new edition clocking in at roughly half the price of the old Japanese release, at least there's never been a better time to be an anal retentive OCD fan!
at 6:59 PM