Back in 2005, a plucky little twerp fresh out of a collegian nightmare started learning VirtualDub and CCE SP, in the hopes that he could celebrate the 20th anniversary of VAMPIRE HUNTER D by presenting the OVA in a newly restored special edition, with improved video and subtitles by applying a number of restoration filters on the dodgy looking Japanese DVD release which, sadly, remains the best transfer not cropped to 16:9 widescreen. It was a simple enough endeavor, the span of which would teach him a great many things, and even introduce new friends in his quest to attain videophile perfection.

It's 2009. Whatever bright-eyed wonderment I had in me four long years ago has been thoroughly beaten out of me by years of realizing that every single thing I thought I knew about high quality video presentation is dead fucking wrong. High Definition video finally showed off what DVD was always supposed to look like, and the more time I spent fixing other transfers, the more I realized that, while perhaps no Don May Jr. or Richard Harris, I wasn't completely without talent. In fact, the work I've done on sources that weren't total crap from the start - like Maryu Senki and The Untold Story - have been positively encouraging. Having worked for a few niche labels over the years I'm no longer convinced that DVD is the future (much less of my paycheck specifically), but that doesn't mean I can just give up on what feeble and childish dreams I started so many years ago... no, if anything it only encourages me to do things right, since it's clear nobody else is ever going to make a cent giving a shit anyway.

First of all, there's a few things I feel I must get off my chest before I continue this train of thought: 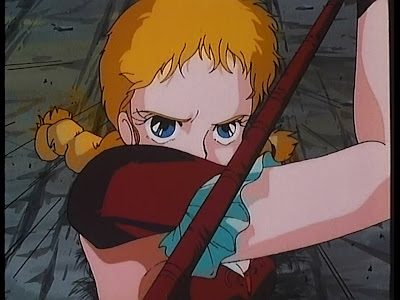 SCRIPTED COMB FILTERS DON'T FUCKING WORK.
I'm not convinced that hardware is perfect either, but it's evidently impossible to create an AVISynth script that removes rainbows without causing chroma-delay and spatial anamolies. I've looked at an ass-load of different scripts, and I can tell you from experience that not a one of them does what it's supposed to without causing problems that are just as bad as the cross-talk and cross-coloration it promised to fix in the first place. 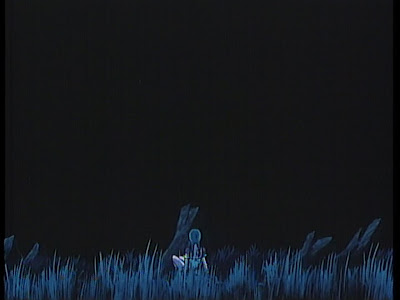 YOU CAN'T KILL TBC MOIRE PATTERNS.
See all those dark, thin horizontal bars that stand out from the crawling background noise? That's a side-effect from a Time Base Corrector, a device I had once hoped would solve all of my problems... didn't turn out so good.

You want to get rid of them? Somehow smooth them out, leaving colors stable and relatively solid? Don't bother. Smearing it out with spatial DNR just turns it into a newer, nastier glob-pattern with only traces of the original moire to speak of. It's not worth it. If you have chroma noise too, get rid of it. It'll wreak havoc on these little bastards, but there's nothing you can do to save the source, so learn to love and cherish your new globby noise-patterns. I assure you, it's no worse than leaving them as-is. 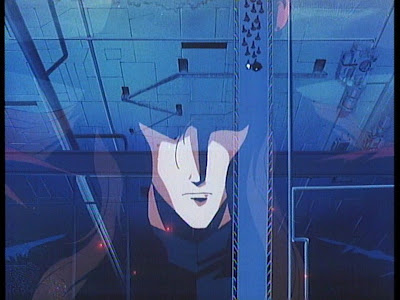 MANUAL IVTC DOESN'T WORK ON NON-100% FILM BASED SOURCES.
This is what a manual IVTC of an 24 year old interlaced transfer edited from separate tape sources looks like.

That wasn't worth the week of manual scrubbing and random pattern changes at reel changes at all, now was it? 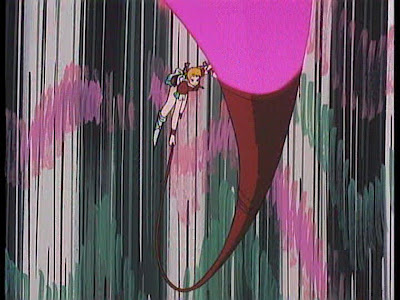 NO.
Nothing, ever, will make this frame look okay. Don't deblock it, don't median filter it, don't try to manually blur out the blocks in Photoshop. You'll just be fooling yourself. The only way to make this any better is to go back to the source tape and re-encode it. If you're working from a DVD already, tough luck cookie. The data is already gone. There's nothing you can do.

But what if I-

I already said NO, damnit! This constant, niggling doubt that I'm doing something wrong has held me off from releasing this feature - quite literally - for several years now, and the fact is... it's not my fault. I didn't make Sony's awful LD transfer, I didn't ask OVA Films to do a gorgeous 35mm sourced remaster in widescreen, and frankly the best post-house in Hollywood couldn't do a better job starting from the R2 DVD. Garbage in garbage out, as they say, and this transfer is the very definition of analog to digital garbage, every step of the way. The sole upside to my countless months of agonizing attempts is that I learned a LOT through my various failures, and I know enough to finally accept the limitations of what digital restoration can do on a crumby digital copy of an even crumbier analog source.

With all of this in mind, I've approached the Vampire Hunter D 4:3 restoration like a sensible, rational, beaten-down servant to the horrors of reality. It won't look great. Hell, I won't even say it looks good. All I will say is that this DVD transfer will be the best fucking 4:3 transfer that Vampire Hunter D has seen on DVD, and yes, I can say that with a straight face. The only way I could ever even HOPE to improve the transfer any further would be to start with a new 4:3 source, but the R1 DVD is a train wreck, and the Japanese LD - even if it's not scratched, rotten, or just plain fuglier than the DVD in some other way - it would simply go from my middle-of-the-road LD player to my middle-of-the-road DVD recorder on XP mode. And yes, that honestly could be an improvement as far as comb-filtering, temporal ghosting and MPEG compression goes... God help us all if that turns out to be the case.

A lot of projects got pushed by the wayside a few years ago due to a number of reasons, and the fact that I'm once again tormenting myself with Vampire Hunter D should be a sufficient suggestion that, yes, I'm doing it one more time. More importantly I plan to finally man up and go trudging through that horrifyingly huge back-log and finally finish a number of DVDs that were... oh, 90% done? Menus will have to be revised, authoring will probably have to be redone from scratch, and yes, some transfers may be re-evaluated. But they will come out. There's no reason for them not to save for my foolish pride and apathy, and I'm probably just as sick of my shit as you are, dear reader.

Vampire Hunter D will not be the first "Lost Kentai" title to make a reappearance, nor will it be the first dramatic restoration on the market. It's merely the symbol of everything I've been doing horribly wrong for the last few years, and thus I'm dragging it back out into the open to (violently) beat my inner demons into submission with it. We can only hope this is the start of something good, and I promise you all that before my head hits the pillow, I'm going to be encoding a restoration that I'm almost half-satisfied with, and I'm going to finish it now before I find a hundred things wrong with it later and it becomes yet another miserable wretch lost to my perfectionists' madness.

To quote the terrible Streamline dub of my heinous tormentor; "So it begins."
at 1:35 AM