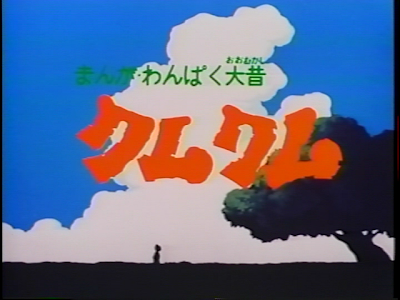 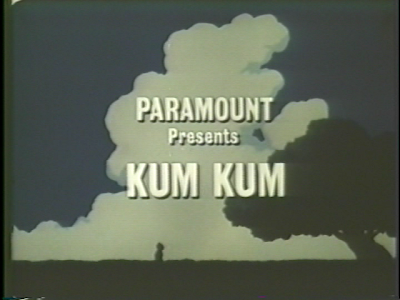 Evidently Paramount had an ego just as big as most fansubbers...
Recently the entire 26 episode series わんぱく大昔クムクム\Kum Kum has appeared on English dubbed bootleg DVD, clearly based on what looks like a competent stone aged video transfer from a severely lacking analog TV broadcast. I'm excited, but sorely disappointed at how... monochrome this full color series looks.

Not that I'm surprised it looks this bad. The show aired on Australian TV in the earliest of the 1980s, and was actually one of the few Japanese titles of the period to get a dub made down under. Odds are this title hasn't been remastered, ever, by anyone, so the analog master you're seeing a digital copy of an analog broadcast from (got all that?) is probably older than I am. Shitty quality has never made a good show bad, mind you, but it can do a number on the viewer's enthusiasm sometimes.

It also aired in countries that spoke German, Frecnch, Italian, Portuguese... heck, probably 70% of the known world at one point or another. I don't think it ever hit North America though, and that's a shame. Not only is it the very first director credit for Rintaro, but as far as kitschy 35 year old anime goes this one is pretty great, with plenty of brutal child abuse, the very real possibility that the young cast could be eaten by wild animals at any time, and little fuzz ball monsters that look like Koosh balls with feet and eyes. It also has a singing brontosaurus. Go ahead, look me in the eye and tell me you never wanted a talking - much less singing - long neck at one point in your childhood.

What really blows is that the Japanese screencap is from a Japanese "First and Final" VHS, which only ever included the first, and last, episode of any given series. Unlike many nostalgia titles, it never got a massive LD box set, so it remains the one legitimate home video release that I know of. Making matters even worse is the fact that the copy I was given to archive had a major tape roll fucking up the final 5 minutes... oh, well, ex-rentals, what can you do...
at 1:25 AM