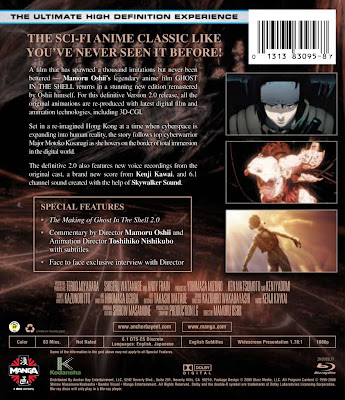 And I quote:
I should have been suspicious over the "face to face exclusive" comment... because that's exactly the wording Manga UK used to describe their special features on THEIR OWN DVD and Blu-ray release of Ghost in the Shell 2: Innocence, not the Ghost in the Shell 2.0 feature they're actually selling. What's especially hilarious is that the UK cover for Ghost in the Shell 2.0 does properly list out everything included in the "Redux" edition of the original film:


This is just the kind of face-palm inducing bullshit that I refuse to believe passes quality control. How can Manga Entertainment not, at some point in time, re-write the cover to reflect which extras are and are not on the fucking BD?! Do they literally not have a clue what's going on with their own properties? My suspicion is that Manga did the authoring for both GITS 2.0 and GITS 2: Innocence for the English release across the pond, and then got their wires crossed at some point... but really, this sort of thing is beyond inexcusable. It isn't just lazy, it's blatantly lying to the consumer, and it's the kind of stuff that just gets my panties all up in a bunch. 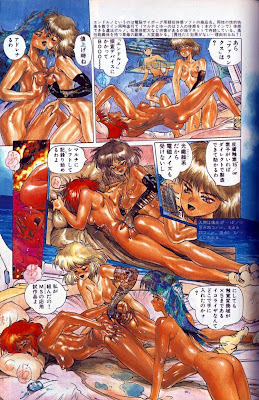 In this representation of these new developments,
the redhead is clearly the US consumer base.
And yes, Bandai loves to watch...
Frustratingly I, and everyone else chomping at the bit over it, still don't know for sure if the original version included on the Blu-ray is an upscale or just an older 1080i HDTV transfer. Having seen screencaps the older Japanese HDTV broadcast, and the 1080p Blu-ray, I wouldn't be shocked if the latter were a heavily tweaked version of the former*. Until I see screenshots I can't be certain what the hell is on this disc, though as the Manga US and Manga UK discs are probably the same, and said UK disc has a 1080i upscaled Production Report, I'm afraid I have a pretty good idea where this is all going...

*Unlike AKIRA, Bandai Visual didn't say a word about Ghost in the Shell being "newly remastered" for its' Blu-ray release.

That said, we can be certain that even a 1080i upscale of Manga's old NTSC tape master would look a thousand times better than their shitty "Special Edition" 480i DVD. Check THESE painful A/B comparisons out if you'd like to see how terrible that pile of pixelated crap is, even just compared to a reasonably competent DVD. 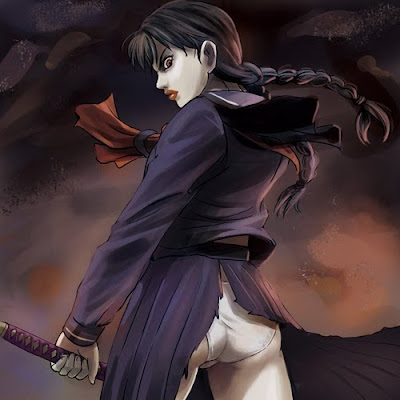 You'd tap this over that prissy moebait-Saya in BLOOD+.
And if you wouldn't, then yes, you are a homosexual.

In totally unrelated news to how shit Manga Entertainment releases can be, the English subtitles on Manga's new BLOOD: THE LAST VAMPIRE Blu-ray are non-removable. I know, 90% of the dialog is in Engrish to begin with, but this is just the sour cream on top of the GITS shit-sundae as far as I'm concerned. To be fair, I'm sure this was a licensor demand, but it's still the kind of thing that just grinds my gears...

You know, venting my anger through soft-porn is probably better than my usual venting with screenshots. Maybe I'll keep doing this in the future.
at 8:31 AM

Herbal treatment is safe for treating various diseases, so you do not have to worry to try