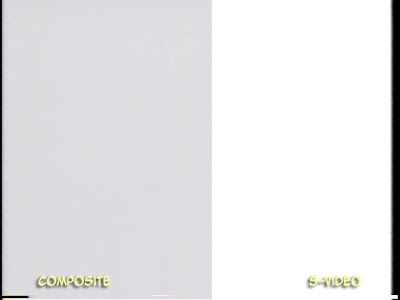 Same frame, different connections.
Well, this is just weird... IRE, the analog video standard that describes the level of voltage required to make a pure black or pure white screen, puts "White" at IRE 100, or RGB 235, on any NTSC broadcast. This includes NTSC analog video formats, like VHS and Laserdisc. My VCR pumps out "white" at RGB 220 while hooked through composite, and RGB 235 through S-Video. In "real world" situations, the difference is less signifigant, so I honestly had never noticed.

More modern digital displays may consider "white" to be RGB 255, but in even digital video terms this is "Whiter than White", and shouldn't be seen on a properly calibrated monitor using a video overlay to begin with. NTSC signals outside of Japan are "NTSC-M", in which black is IRE 7.5 (about 32 RGB), and white is still IRE 100. Japan's own "NTSC-J" has black set at IRE 0 (16 RGB), but is otherwise the same thing. All this actually has nothing to do with my current problem, either; the VCR outputs black on either output as IRE 7.5 for US tapes, IRE 0 for Japanese tapes.

I've been recording VHS via composite video for some time now, largely due to the Toshiba comb-filter's excellent job eliminating dot-crawl on LD sources. I did some basic tests on studio logos and the like to confirm that the comb filter in my recorder was better than using S-Video from the VCR, but I've also been fixing the white levels on damn near every recording I've ever made... at least now I know why.

I think I'll be sticking with S-Video from the VCR from here on out, even though the differences are largely minute. The S-Video connection does leave a bizarre dot-crawl patterns on large patches of a single color, like a blue sky, but the comb-filter just smears it into more irregular noise, which honestly doesn't look much better.
at 9:33 AM