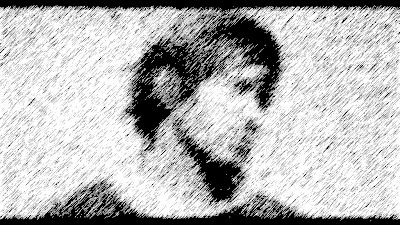 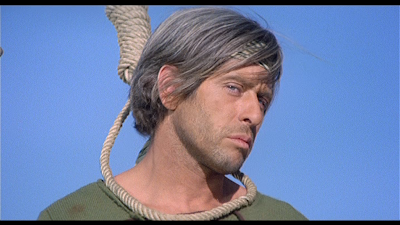 Cesare Canevari's 1970 Spaghetti Western MATALO! is a fascinating flick, even for people who aren't that big into cowboys and gringos. Simultaneously an epic outlaw film, a hippie-minded rage against the capitalist machine, and a surprise experience in in surrealism, it could well be Canevari's "best" film; it bears all of the hallmarks of his personal style while still being just simple enough for mass consumption, and thus the whole thing feels "fun" instead of "smart". Make no mistake, it's both, but it tastes refined rather than pretentious.

I won't, however, call it "the weirdest Western ever made". Sukiyaki Western Django and El Topo are going to compete for that crown for the next century, so why complicate things? 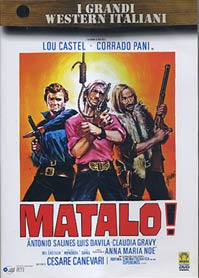 I was sent a 1:1 copy of the Medusa Home Entertainment PAL DVD, which features a high bitrate (8.84 Mb!) 16:9 transfer struck from the negative, a new 13 minute interview with Cavenari, and the film's vintage theatrical trailer. The transfer - remastered in HD if I'm not mistaken - is gorgeous, barring the very last shot of the film at least, which has some pretty nasty looking video-generated credits. Otherwise, it's one of the sharpest and most film-like DVDs I've ever seen, and while I'm sure a Blu-ray could improve on the whole, I'd gladly hold this up as proof that plenty of DVDs on the market aren't even trying. 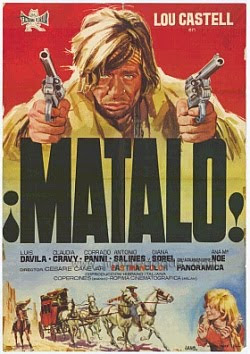 The problem as a Yank was the language options; Italian mono, Italian subtitles for the deaf and hard of hearing. The English dub is available on the Wild East DVD, which is probably a bootleg, and looks like a decent VHS capture with a haphazardly synched English track. The folks at CultCine, a crazy son of a bitch after my own heart, cut the Wild East audio to the Medusa transfer; I myself had started doing this, and quickly abandoned the frustrating process once I learned that everything I needed already existed elsewhere. (Notice a pattern here?)

CultCine used a frame-interpolation pulldown scheme to get their NTSC transfer. That's basically a fancy way of saying that the data is still 25fps, but it's been resized to 480p and the frames have been flagged to play at 30fps, so the film still has the same runtime as the PAL transfer... but it's still - technically speaking - progressive NTSC. Confused? Well, don't worry about it too much. Slowing the PAL materials down to 24fps and using 3:2 pulldown would have been the wiser choice, but if you don't notice PAL speedup or weird pulldown-related crapola, there's no real difference anyway.

This was all good news for me, since it meant the CultCine audio track dropped into the Medusa DVD without any additional work on my part. Much as the CultCine disc is surely worth the $15 he's charging for it, the release is still a DVD5, with a lower bitrate transfer (6.5 Mb), with no Italian language options or special features. The Medusa DVD is thus still superior - particularly if you speak Italian - and now that the English dub has been added to the disc, it's got all of the advantages of the Medusa DVD and the one advantage of the CultCineDVD.

This is, I do believe, the very first English-friendly Kentai Films DVD release to NOT include English subtitles. I toyed with the idea of creating a "dubtitle" track for the disc, but the Italian dialog is obviously quite different from the English script, so it felt like a bit of a waste. Kemushi has threatened to have an Italian speaker translate that Canevari interview someday, so there's always a possibility that we'll see a Kentai Films Ultimate Edition with English subtitles, but for now just enjoy the film dubbed. The English dubbed version has its' own eye-rolling charm of half-sentences adding needless words to match mouth flaps, and with the multinational Italian, Spanish, and South American cast there's no single "original" language track for this film anyway.

Go 'n' grab it from Cinematik if you can, or contact me if you can't. I'm sure in a week somebody will up the whole thing to Usenet and/or public torrent trackers, anyway...
at 5:58 AM

Ah man, you're putting my work up for free.

At least you linked me.
Thanks for that at least.

If it makes you feel any better, Cinematik already had the CultCine DVD on the tracker before I added the dub to the Italian DVD. If there were to be any sales lost, they'd be gone wither I posted the dual-layer version or not.

That blows.
That's going to set me back on future projects.