The Last DVD On The Shelf? 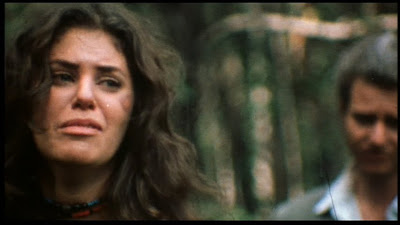 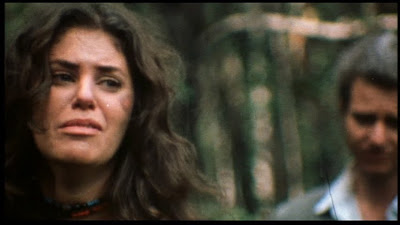 Wes Craven's 1972 exploitation debut LAST HOUSE ON THE LEFT is an important part of the American cinematic landscape, but being "important" doesn't always equate to being "good". It dragged middle America kicking and screaming - and loving it, I'm sure - every step of the way into the grindhouse era of explicit modern-day horror, and introduced film goers around the world to what would eventually become one of Hollywood's most prolific genre specific producers, and perhaps the single most respected genre director alive today. Even so, it was typical of a debut film; rough around the edges, obviously cheap, and badly in need of some editing to cut through the crap to the "good stuff".

His follow up feature, The Hills Have Eyes, would cement Craven as a sort of All American Terrormeister, and he'd be one of the very few "horror directors" to gain some level of critically acclaimed legitimacy and then not leave the genre in the dust. For that alone, I have a boundless level of love and respect for him, and the fact that a decent chunk of his work is quite good sure doesn't hurt. Comparing the film to a rough cut diamond versus a polished gem stone is perhaps appropriate... for all the horrific beauty and brutal honesty lurking in its' rape, murder and revenge, you have to put up with a lot of bullshit from comic relief cops, and a few eye-rollingly convenient post-dubbed dialog scenes to get there. Craven himself sounded just a little embarrassed over much of it on the MGM commentary, but at least it's the shame of his amateurush faux pas as a now-seasoned writer and director, rather than the fact that he dabbled in the genre at all.

When news of a fancy pants remake broke, I was hopeful that somebody would get the positive aspects of the original and focus on them whilst jettisoning the baggage. As is typical when I get excited about this sort of thing, I saw the trailer and pretty much abandoned all hope. I may eventually catch up to the Dennis Iliadis remake, but I'm already put off by the notion of a 21st century take. Craven's choice to remake Bergman's costume drama The Virgin Spring in the modern age, packaging a foreign work of a celebrated director for the masses, was sort of honorable and clever in its' own right. Updating the hair styles and budget without bringing anything new to the table thematically, however, just reeks of a lazy cash-in to renew the property before the copyright lapses. Now I could be wrong, and have been before from time to time, but everything I've read and seen about the remake is a Wal*Mart cubic zirconia to the original's rough diamond: it's a lot prettier at first glance, but is it honestly worth anything? 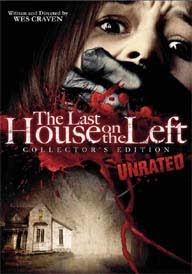 MGM Collector's Edition
Anyway, the good news about any good film getting a remake is that you always get a new Collector's Edition of the original... as you can see, Craven's LHotL was no exception. The cover is all sorts of What The Fucking Christ, but I saw it at Chinatown (by which I mean Wal*Mart) for about $13 with a bonus silly "lenticular" cover, so if I tilt the cover one way, the bloody splatter and giallo-hand covering some model's mouth disappears... which, honestly, makes the package look a hell of a lot better. The UK Ultimate Edition is still selling for about twice what this would cost, and the only DVD release I had prior was the MGM DVD from 2002, so I figured I could buy now and keep my fingers crossed that it gives that Metrodome UE a run for its' money. The Yank Edition does hold its' ground valiantly for the price, but had I hocked the old edition first I'd be pretty pissed off right now.

First off, the transfer is new. No, not remastered, but compare the two screenshots above: the older release is crawling with mosquito noise and a general haziness, while the new transfer's improved bitrate helps keep grain looking like... well, grain, rather than MPEG artifacts. It's not a night and day difference, but it is a welcome step up, and with the film elements for this in as sorry a shape as they are, nobody should ever expect LHotL to be a "reference" transfer. If you want a movie of this title to look shiny and new, buy the Blu-ray of the remake. Even Don May Jr. himself and a crack team of MGM intern slaves probably couldn't make this film look much less crap than it does to begin with. Anybody expecting LHotL to look like Transformers 2 or Braveheart or whatever are out to fucking lunch anyway, but I've never seen the film look better, and I imagine anyone who ever suffered through trying to watch the Vestron Video tape will instantly be satisfied.

As far as extras go, hang on to your MGM flipper: you're losing a lot more than a useless 4:3 transfer on Side B. None of the extras on the 2002 DVD are on the Collector's Edition, which included 15 minutes of outtakes and dailies (including the grim disembowling footage used in Confessions of a Blue Movie Star), an introduction by Wes Craven and director/producer commentary, a featurette called "Forbidden Footage" detailing their problems with the MPAA, and a vintage theatrical trailer.

The MGM CE includes an exclusive 15 minute featurette - Still Standing: The Legacy of The Last House on the Left - along with a pair of British documentaries, Scoring Last House on the Left (10 minutes) and Celluloid Crime of the Century (40 minutes). Also includes is a cast audio commentary, a minute long deleted scene of Mari telling her parents what happened as she dies in their arms*, and perhaps most notably, 5 minutes of "Never Before Seen" outtakes of the most offensive footage Craven shot for the film.

Curious to see what Roy Frumkes gave them, but MGM didn't have the balls to release on the 2002 DVD? 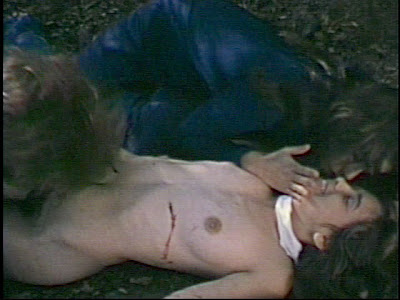 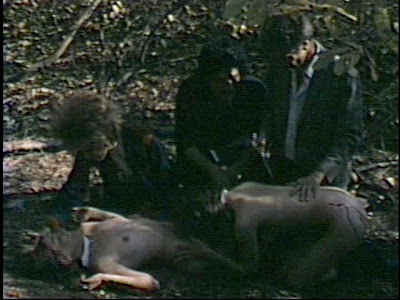 *OMG SPOILER! Sorry, but if you haven't seen Last House on the Left by now... I mean, seriously? I can say that Darth Vader is Luke Skywalker's father, right? And that Soylent Green is made of people? There's got to be a damn cut-off date for these things!

I'll point out that the quality on the new footage, copywritten to Roy Frumkes, is pretty fucking dire compared to the original dailies footage found on the 2002 DVD. As the story goes, Roy was given the material after becoming pen-pals with Craven in the 1980s, and when MGM was ready to re-release the film on DVD he sold the whole box of dailies. MGM saw the delicios lesbian rape footage, went "aw hell naw", and it was expected that it was gone forever. Fast Forward to the UK UE (see below) and all of a sudden these "Never Before Seen" dailies are intact... I'm not sure if MGM gave him back the Craven fap-fodder or what, but we're stuck with what looks like VHS, maybe Hi-8 sourced footage that's cropped and has wonky color values and heinous video noise.

Here's a peek at the jarring difference in quality between the two sources: 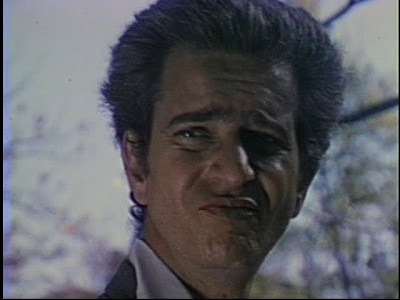 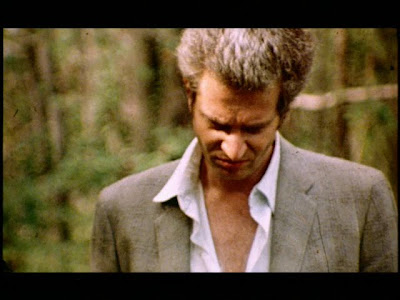 MGM's "Outtakes & Dailies"
If an old video from a mechanical telecine made in what looks like the early 1990s is all that exists of this footage, well... that sucks and all, but there's not much anybody can do to fix it. If, however, MGM is sitting on this material as Frumkes has led the world to believe, then they should be ashamed of themselves.

There's also about 11 minutes of footage from Tales That'll Tear Your Heart Out in the same shape as all that "Never Before Seen" stuff, which is relevant in the sense that it was shot by Wes Craven and features David Hess, but not in that it has shit to do with LHotL directly. The footage present is only the footage Craven himself worked on, so it's actually quite different from the clips that appears on the Media Blasters DVD of Zombi Holocaust. And yes, I'm big enough of a geek that I watched all of it at one point or another. 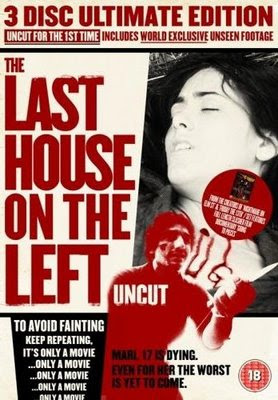 Metrodome Ultimate Edition
Still, the be-all and end-all DVD release for LHotL is the UK Ultimate Edition from Metrodome. Excluding the Craven introduction, Forbidden Footage and Still Standing featurettes, it has everything mentioned above, and quite a bit more too:


The "Deleted Scene" on the MGM CE is culled from Krug & Company, but there's a few alternate cuts not on the uncut US release (check the edit report). The Uncut version isn't quite the same as the "Unrated" Vestron video (found here), which having been provided by Craven personally could be counted as his own "Director's Cut", but good luck finding a copy, and personal experience tells me that the quality on those old tapes is rarely worth the effort...

While $25-30 would net me the complete package, I still feel pretty good about what I got for the price. If PAL imports aren't your thing - or you're just a cheap son of a bitch - the MGM Collector's Edition offers a pretty decent bang for the buck. Had they opted to include the special features from the earlier 2002 DVD I wouldn't have any complaints at all, but as it stands I've put both discs in the same case, and will hang onto them until I go completely insane and buy that Metrodome set.
at 8:25 PM