A New Lease On Maryuu 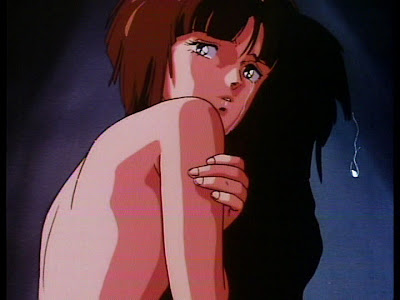 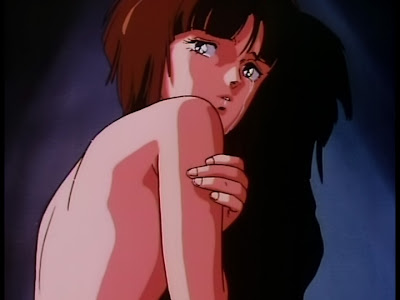 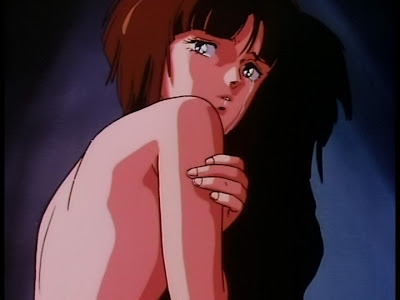 The slight cropping on all 4 sides is a side-effect of the film judder stabilzation filter. It doesn't actually zoom the film in, but it does make the film shift left and right and up and down completely at random, so you sort of have to zoom the print in slightly or it looks like the edge of your video is having a seizure. I'm not sure if I should keep it or not; on the one hand it keeps still shots nice and comparatively steady, but it sometimes adds jerky movement to pans that were once just fine. The judder isn't Vampire Hunter D or Evangelion bad, but it's still easy enough to spot that if I CAN get rid of it, I'd like to.

The dirt/scratch removal filter, as you can see, is the kind of magic I thought existed only in fairy tales and acid trips. The only flaw is the fact that it likes to eat tiny white stars in the background during the ninja-oni fight, literally only giving them back when the camera stops moving. It's a little creepy seeing them blink back on after the sky was pure black the entire length of the shot before. Not helping matters are the LD's crushed black levels, which means that there's next to nothing I can do to try and separate the stars from film damage: on a black sky, a moving white dot looks like film damage, and even if I were fixing these scenes by hand (fat chance!) I'd have some difficulty picking out what is and is not. I'll simply need to re-watch the problematic bits and decide if missing stars, or dirt and LD dropouts are the lesser of two evils.

The Digigrain(TM) is an issue I'm currently straddling the fence over. On the one hand, the DNR I used to erase 20 year old LD rot has worked wonders at removing the layer of static-like haze over... well, everything. On the other hand, it now looks a bit too 'plastic' and out-of-focus for my tastes. Maryuu Senki, when devoid of anything resembling grain, like almost like a modern digital animation project rather than anything shot on 35mm film. The results I'm getting from Grain Factory don't quite look like "real" film, but a lot of the plugins designed to do the same thing are even worse at it, and grain is tricky to express in still form OR heavily compressed video, so I'd be better off posting a DVD clip - but I'm too lazy to do that right now.

Particularly since I'll be cramming all 3 episodes on a single DVD-R, heavy grain probably isn't in the best interest of the encode, but what I have here looks vaguely similar to the fine grain I'd expect to see in an OVA of this era/budget. I may tweak the grain further, see if I can make it look less "sharp" and just a bit heavier without actually obscuring outlines or gradients. Digital grain is an art unto itself, and it's one I'm still a mewling babe at, but I suppose there's never been a better time to learn... 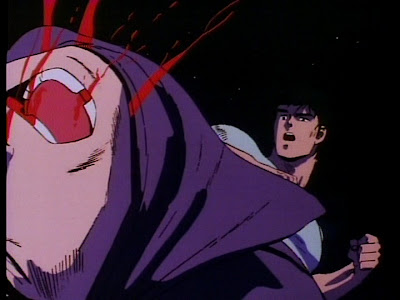 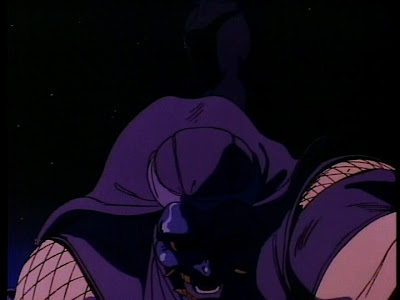 To give you an idea of what I meant by crushed blacks...

The rental VHS of Maryuu Senki I saw before I had the LD has the same "crush", so I'm certain it's a problem with the master.

One big issue with 1980s telecines was weak contrast, which caused blacks to be washed-out and have very little shadow detail. My theory on Maryuu Senki is that whoever made the transfer saw how bad the whole thing was, so they used a proc-amp to crush the levels down until that charcoal gray became actual black. (Something I'm doing myself for Vampire Hunter D, if you remember.)

Sadly, this is a problem with the whole feature, not just the outdoor scenes: 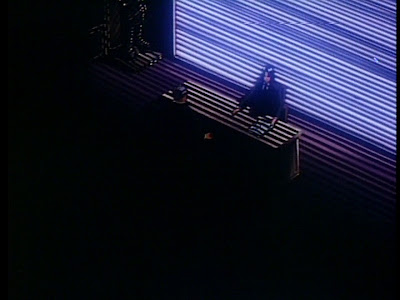 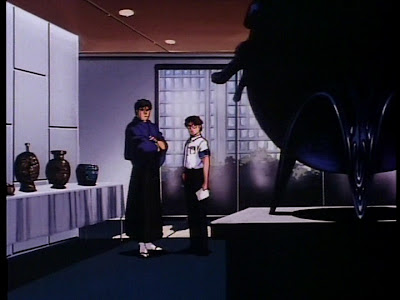 MARYUU HENJOU has similar inky-as-all-hell-black look, bu the art design is generally better, so there's simply fewer scenes of bitch black sky with white stars poking through at random. MARYUU SHINDEN has fantastic levels all across the board, with strong blacks, but makes up for doing something right by being both the noisiest and most film-damaged riddled of the three.
at 3:33 PM

Could the crushed black levels just be the difference in IRE for NTSC-J? I always have to boost the brightness a bit when running Jp LDs through US equipment.

That's actually something that never crossed my mind.

Sadly that can't be the problem, since Maryuu Senki is the only LD I've come across with levels anywhere near this crushed. If all JP LD's were dark I wouldn't think twice about it, but compared to any other transfer I've seen in the last year this thing is a black hole.

I do have a theory on why Maryuu looks so dark, but I'll share that when I have more to show for it.

Kentai, i know this would be abrupt and stupid but could you email me, i just saw your blog and there is something there that interest me. i wish to talk about it privately.

this is my email add woopeeallan at yahoo or gmail dot com. pref the gmail one. (can't put my email directly because of spam.)

hope to hear from you. i know its demanding but technically i'm in a way desperate already.

again thanks for your time.