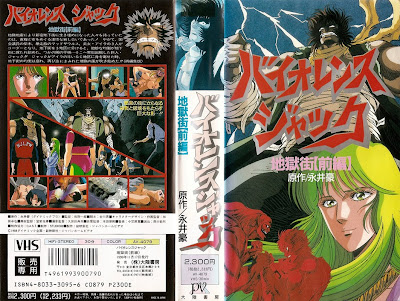 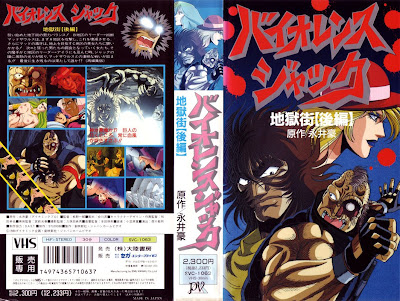 Violence Jack: Evil Town is something of a dirty oddity, both in the career of director ITANO Ichirou (Gantz, Blassreiter, Angel Cop) and in the wild OVA market of the late 1980s Japan in general.

Pornographic animation for the video market dates back to at least 1984, with the Wonder Kids' now legendary Lolita Anime series. Evil Town incorporating pixelated vaginas and shemale dick was thus nothing truly shocking or out of the ordinary... what was surprising, however, was seeing it in an adaptation of a NAGAI Gou manga, and from a "legitimate" director who hasn't worked in what anyone with common sense would describe as pornographic anime, either before or since.

Nagai was no stranger to controversy, with his bawdy Harenchi Gakuen manga having been supposedly publicly burned in protest by the Japanese PTA in the late 1960s/early 1970s - not that it kept the raunchy comedy from getting a successful TV drama and theatrical feature, and becoming an even bigger financial success. Of his three most iconic creations, only the giant robot saga Mazinger Z resembles what America would consider a "typical" childs' entertainment: Cutie Honey is the tale of a sexy robot avenger who wages a one-woman war against the terrorist organization who killed her father, and Devilman is about a young man who allows himself to become possessed by the powers of an ancient demon to fight the forces of Hell with his own bared claws. As for why Harenchi Gakuen was such a problem, well, I'll put it this way: Nagai beat Tomino to deciding that the perfect series finale was everybody fucking dying.

Nagai's openness to film and TV adaptations of his works mean that the Devilman most Japanese children were familiar with from Toei's weekly serial had very little to do with Nagai's dark and brutal tale of total human annihilation and romance of dubious gender identity. Nagai's dominance of the 1970s is largely thanks to massively popular Super Robot shows, including Mazinger, Getter Robo, Koutetsu Jeeg and their countless spinoffs, but that level of unshakable commercial stability allowed him to write whatever the heck he wanted while the royalty checks rolled on in... 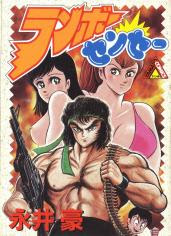 Behold, RAMBO SENSEI.
To be fair, Evil Town was not the first Nagai adaptation to feature graphic pixelated sex. The 1985 Chou no Ryouku Shoujo Barabanba OVA holds that distinction, though being so obscure it's largely been forgotten. It's also not especially good, in my opinion, but that's neither here nor there. Violence Jack as a manga was certainly graphic and controversial from day one, but Kodansha's Monthly Shounen Magazine regularly cut the most explicit pages of rape, cannibalism and torture before releasing it to the public. It wasn't until long after the OVA series that the Complete Edition of Violence Jack would be available to the Japanese public, but that didn't stop Itano - never a man to shy away from sex and violence in his work - from pushing the boundaries of Evil Town into the realm of hardcore.

Quick bursts of frontal nudity used exclusively in the context of violent rape fly by, designed not to titillate - as similar scenes used in titles like Urotsukidoji and Wicked City are clearly meant to - but to horrify and offend the viewer down to their very core. While Nagai's depiction in the original manga literally involved the rapists transforming into monsters, Itano plays the crime as all too human, only allowing for a budget-friendly monochromatic effect to obscure the fact that the abusers are men - and women - just like you and I. 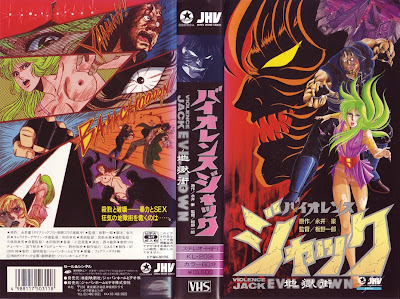 Uncut Japan Home Video VHS
BAACHOOON!
When the third and final Violence Jack OVA - Hell's Wind - was released in 1990, it ushered with it a second release of Evil Town from budget label Pyramid Video in two parts (see covers above). Two videos at 2,300 yen versus one video 13,800 yen is quite a steal, particularly circa 1988 in Japan, but let's go over what the differences between the JHV and PV tapes are before we hail these jackasses as being pretty cool guys.

The most obvious change was the inclusion of the credit sequence on tape 1, and the new opening title sequence on tape 2, neither of which are all that different from the footage featured on the uncut version. There were also several short text pieces telling fans that there was another tape in the series, and that Hell's Wind was on the way. It also cuts to the end of the story more suddenly, not reveling in shots of a ruined Tokyo and swapping out the music cues for something a bit less uplifting. 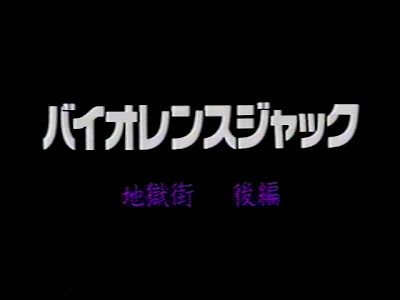 Part 2 New Title Card
Nothing too exciting, right? Well, the other change was the removal of virtually all of the graphic rape footage! When I say "graphic", I mean each and every shot of pixelated cock. All the scenes of the girls being stripped, licked, groped and otherwise molested is missing. These edits are accomplished mostly by sloppy cuts with the offending footage simply gone missing, but there are two cuts in particular that fascinate me:

* The lesbian wrestler with the lead pipe shoved up her vagina has been removed, but the shot of Jack running after finding her is there... but before it can pan down past her waist, the shot freezes, and then fades out.

Just so we're clear, showing the dead dyke with a bottle shoved down her throat is awwwwright, but genital mutilation is a no-no? Um... 'kay. I guess the shot was originally mosaiced, but the Hong Kong VCD proves that there was really nothing more to see...

* The shot of Wasp's brains spilling all over the floor and splashing back on the B Zone biker chick (did she have a name?) has been shortened. My guess is that the brains weren't the issue, but the uncensored vagina in the background was.

While it'd be easy enough to compare this to Manga Entertainment releasing their own heavily cut version of Evil Town in the US/UK, that's really not a fair comparison. Manga had already cut 3:55 worth of footage from Evil Town in the hopes that they wouldn't have the title banned outright, effectively removing all of the rape (and panties-pissing, I think?), the BBFC demanded further cuts to the scene of Mad Saurus eating the remains of Kid Blue. I admit I'm not quite sure how animated depictions of cannibalism could single-handedly tear apart the fabric of British society, but hey, this is the same well adjusted censorship body that decided female orgasms were made of piss, and thus undistributable to adults. Shockingly, Hell's Wind had more footage removed by the BBFC, and it had neither hardcore rape nor pee... oh, that wacky Board of Film Classification!

The Pyramid Video tapes are also pretty poor in quality. I know, all VHS is noisy blurry crap, but these guys still took advantage of the situation: 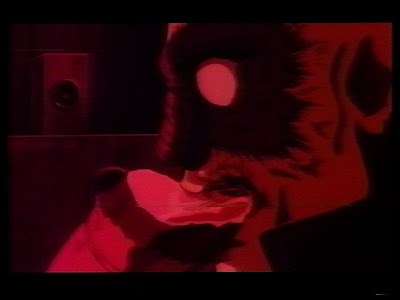 There is a great, hilarious irony in the Pyramid Video release though: While the tapes themselves cut all of the graphic rape footage, the cover art not only contains shots missing from the video, it actually contains UNCENSORED shots that even the uncut Japanese tape pixelated out! I'm pretty sure all of this footage is uncensored on the Hong Kong release anyway, but still, what the hell are the odds?
at 4:06 AM

Thank you for sharing the information, may be useful :)