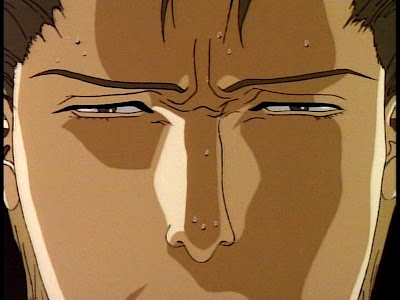 Source frame, a heinously noisy LD circa 1989,
recorded to DVD at 8.5 Mbps with PCM audio. 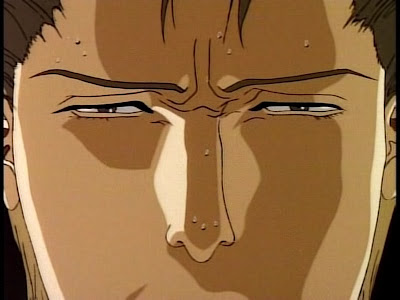 FFT3D Filter was the best noise reduction algorithm I've found yet in AVISynth. Higher settings blur more than I'd like, but even then it never quite gets rid of that smudgy, clumpy look you can see above. It converts compression noise into compression blobs , and at that point I'm not sure I'm improving much of anything. It's not as destructive as MipSmooth or Deen though, and trying to denoise an LD with those is sort of like trying to polish a diamond ring with a piece of steel wool.

Neat Video, however, has made this frame absolutely stunning. Not only has it eliminated all traces of analog video noise and damn near everything resembling an MPEG compression artifact, but it kept minute details in the source, right down to the dot-crawl artifacts on his left ear. Now that's fine detail retention!

I know when I'm crunching a whopping half-frame per second, I'll regret it, but I just can't find any reason to go back to using AVISynth based DNR. 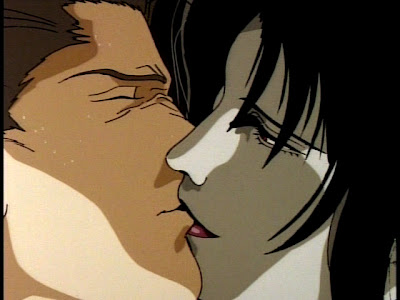 How do I keep forgetting that whole gay mind-rape scene?
Seems like the kind of thing that'd stick to my brain's ribs...

As for upcoming Kentai related transfers, SUBWAY SERIAL RAPE 4 (VHS) is finally up to snuff and being encoded as I type. This poor film has had subtitles ready and waiting for months now, but the first VHS copy I got was pretty chewed up, so it was hardly worth restoring. This fresh copy was virtually mint, so you can look forward to being one step closer to finishing off this brutal little franchise.

I've recently put the finishing touches on CAROL, the reasonably obscure and oh-so suitably silly T.M. Network OVA from 1991. It's basically the story of a giant anus who steals music from the world, and only the trumped-up light fantasy charicatures of a pop band (and their wish-fulfillment Mary Sue teenage heroine) can save the day. It's all pretty daft, I guess, but I defy you to name a better band movie that starred neither The Beatles nor Guitar Wolf.

DEAD HEAT is probably next after that, nasty little noise-monster that it is, and I'm about ready to give up and post THE GUYVER: OUT OF STANDARD as it is now. There's next to nothing I can do for the poor girl, except maybe make some subtitles out of that old Darker Image tape I have recorded, but there's got to be a half-dozen projects (or more?) that are long overdue as it is, so the Bio-Boosted Armor will have to take a number behind... well, you'll see pretty soon.
at 5:42 AM

Damn that Wiki! Always having stuff like "Facts" and "Dates". This is why I get all of my blog information from Encyclopedia Dramatica...