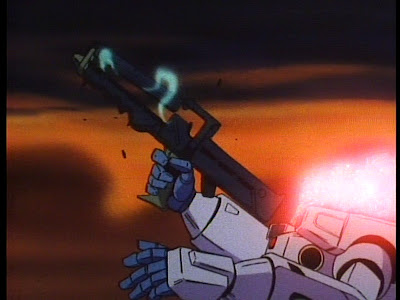 宇宙の戦士 STARSHIP TROOPERS
This is the 1988 Bandai LD, and is actually the second copy of this episode I've gotten my hands on in the last year or two. The good news - well, I think it's good news - is that this first volume looks fantastic, and is ripe for both further restoration and subtitling. The last copy I had was so affected with LD rot that it literally became unwatchable at about the 30 minute mark. God help me, I've seen worse, but it was still in no shape to restore for DVD. 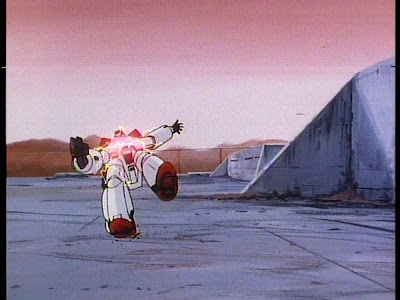 Rotten as a weeping cheese;
it's stinky, but it's still pretty edible.

Lots of random chroma noise and small horizontal dropouts randomly flicker through the entire feature. Imagine a very dirty 35mm print, except the dirt is binary distortion. (And there's dirt on the actual film print, too.) I could probably manage at least some of it with filters designed to remove film damage, but after the beautiful and rot-free first episode, seeing crap like this constantly flicker through the second part is a pretty major disappointment.

I'll check out Episode 3 tomorrow. 100+ minutes of this schlocky, boring, war-mongering intergalactic faggotry is quite enough for one evening. I may adore Verhoeven's Hollywood spoof of the material, and I can't say Heinlein's book isn't written in a way that makes it more interesting than it ought to be, but I just can't say enough bad things about Sunrise's anime adaptation. And so, just like Riki-Oh 2, Star of David, and so many other atrocities that haunt my fever dreams, I face my fears and demons... by making them look pretty. If only Freud could see me now!
at 12:05 AM

I recall from the LD philes usenet FAQ from years ago that a title with more than 10 dropout lines in any given frame was defective and should be returned. That shot has what 3? Live with it. Starshit Troopers isn't worth the effort anyway... Besides, you can always find a better LD and release a remastered harder version 2.0!

I must have Chou no Ryouku Shoujo Barabanba. Give it to me!!!

I actually got these myself 2 years ago or so, only managed to watch the 1st episode. Didn't know they were prone to rot, maybe I should check out the rest sooner rather than never...

Barabanba can be downloaded here: