Sexiness has a New Head 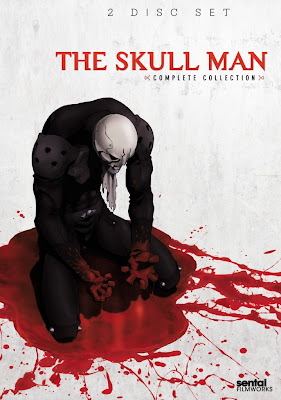 R1 Collection DVD Cover
I'm a whore for high quality packaging, as we've been over. A well done DVD cover is a thing of beauty, and this right here may well be the best cover I've seen all year. If only it'd been a steelbook I think I might have had an instant jizzgasm.

Anime licensors in the US moving to "complete" season sets was largely hailed as a positive - we get the same content faster, cheaper, and it doesn't take up as much room on the shelf. Perfect, right? I personally always feared - and rightly so, I'll add - that we'd start getting shafted on packaging, and that the shafting would only get harder as time went on. First we got 3 disc thinpacks. Then we got 2 discs in each thinpack. Then we got stackpacks... I don't want to discuss this devolution any further. Suffice to say, if DVD packaging gets any worse, I may start throwing it in the trash bin where it belongs.

Not only are we now getting 13 episode shows in a normal sized 2 disc keepcase, but most of the time we aren't even getting interior cover art. Getting anime fast and cheap came at the cost of collectability, and for the seven guys at the Anime on DVD forum who still give a shit, that's a real shame. English dubs also took a hit, but thankfully I could care less.

Section 23 is "Neo ADV", the shakily reformed remnants of the company that imploded when their Japanese partners left them floating in the water without any titles, money, or credibility. They've consistently released anime DVDs with interactive menus and basic special features - something I can't say for their Switchblade Pictures line - but they've generally had less than inspired cover art, and by consistently releasing shows with little more than subtitles the releases feel... empty. On the other hand, the entire Skull Man TV show will cost $40 MSRP, and if I'd known I could have saved the time and money of downloading and burning 7 custom DVDs I may have just waited.

Despite hating poor ol' Ishinomori I watched an episode or two a while back of this Bones remake. Fucking loved it! Started downloading the fansubbed R2 DVDs, but never actually watched them, knowing I'd have to wait god only knew how long for the next volume. When the release was finished, I'd amassed a leaning tower of similar DVD-R fansubs, and as it stands I still haven't finished... well, damn near any of them. Much like Kannagi and Mnemosyne, odds are I'll finish watching the R1 due to my horrible apathy towards staying current.

What's the appeal, anyway? Watching every show the minute it airs? 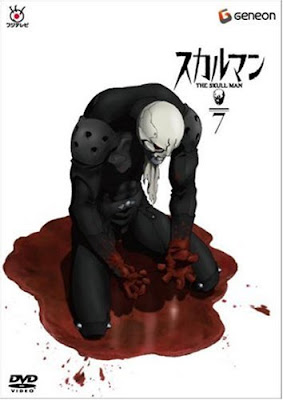 Japanese cover the above is based on.
at 2:51 AM