Are You Saying My PS3 Is Gay? 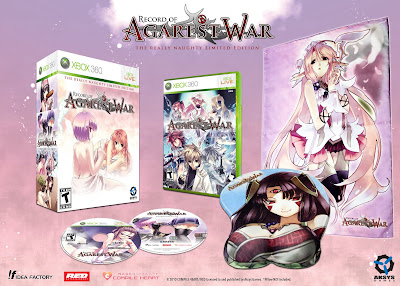 The upcoming Limited "Naughty Edition" of the sexy girl drama/
strategy battle RPG Record of Agarest War/アガレスト戦記
includes some pretty awesome first press extras...
Oh sure, plenty of vocal fans today would just love to see this kind of lolita fetishism and jiggle objectification disappear from the anime/manga/gaming subculture, not so much because it actually offends them morally, but so they could feel like they can take it all more seriously and not feel like they have to explain their affection for undressed animated teenagers to others. The western world has a hard time accepting that 2D character representations - cartoons, I mean - are anything but drivel for young children, and the fact that Japan does occasionally produce 2D animation targeted solely at smart adults gives foreign fans the faint hope that Japan is a nation of people who "get" that cartoons can, and should, be edgy. They blindly assume that, because THIS show was badass and totally serious, everything else those crazy Japs make must be just as awesome!

Most of these people are missing the point, of course. Anime, manga and Japanese video games, which have formed a bizarre and tightly interconnected relationship over the last 20 years, exist primarily to amuse people under the age of 25 with bright colors, big eyes and sappy pop songs. To otherwise distract us from how boring our own mundane life really is, a life lacking in honorable turn-based sword magic combat and humorous situations revolving accidentally revealed anti-gravity boobs. 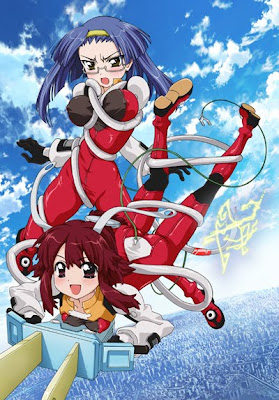 Undeniable proof that Japan's industry of self-depreciating
pedophile/misogynist pandering has gone too far...
and makes the world a better place for it.
If this sort of light weight and marketing driven pandering offends them, odds are they shouldn't much bother indulging in Japanese pop culture to begin with. It's been this way for well over a decade, and it isn't about to stop any time soon if shows like Queen's Blade and Strike Witches continue to sell so well they can justify sequels.

Me? I just wish more games came with these "3D Oppai" mouse pads. I still kick myself in the junk from time to time over the fact that I never bought the adorable Night Shift Nurses version... 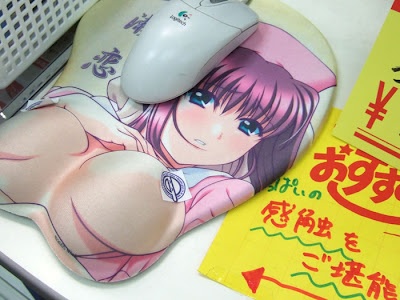 What, you don't like tits cushioning your wrist?
The only real issue I have with this stunning limited edition presentation is the missed opportunity - namely the fact that it's only available to XBox 360 players. The PS3 release will be a nearly 10GB download-only game, which distributors Aksys Games promise will be slightly cheaper than the physical release, and (if I'm not mistaken) will include some free download content that 360 users will have to pony up for. This sounds like a reasonable compromise, but becomes largely irrelevant when you consider that these boob-pads typically sell for anywhere from $25-75, and the limited edition of the game is just $60, making the fucking game itself a virtual freebie if you just want the physical extras.

I have a PS3, and not a 360. That's not because I'm vehemently anti-Microsoft or pro-Sony, or even because there was one single game on the PS3 that I needed to fucking live, but because the PS3 offered the same basic gaming capabilities as the 360... plus a Blu-ray drive(*fap*), built-in wireless internet, free on-line play, the option to install consumer level HDD, plus several other smaller things that made it generally more appealing. Price aside, there was really no reason to favor the Bawks over the Pee-Ess, so I waited and got what I really wanted. As simple as that.

I know people just love to defend their favorite consoles to the death, and to the best of my knowledge they have since the days of the Nintendo Entertainment System versus the Sega Genesis, and it wouldn't surprise me if there was a forgotten epic war between ColecoVision and Commodore 64 players that existed long before the internet could keep track of - and simultaneously make fun of - such selfish and pointless retardation. 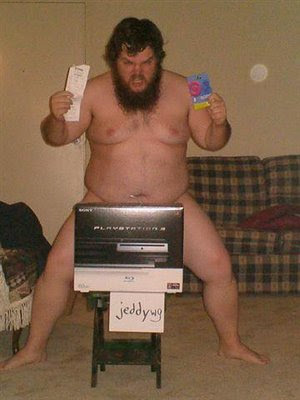 Case in point.
I don't care what side of the fence you're on, the fact is releasing a game made to be available on multiple systems getting extra crap thrown on only one of them is ridiculous. Even worse is the fact that while Aksys is simply forgoing the physical media on the PS3 version (I suspect to save money on pricey Blu-ray replication costs), the game is getting released on disc in Europe and Asia, which means virtually any other goddamn region of the world could have potentially offered people who don't spend every dime buying various game machines (What? Spend money on GAMES?!) the chance to squeeze the relevant plastic toy tits they so rightly yearn for.
at 11:47 PM

Though I've got no verification on this, the release may have something to do with Sony's mysterious "quality standards". Agarest is a low-budget game that uses 2D sprites against 3D backgrounds, and neither element is particularly well-done. The result looks like something C-list from last console generation. It's entirely possible that Sony didn't approve this game to be sold at retail on account of the look of the thing: they usually recommend developers to publish 2D games on the PSP or go direct-download with them, after all.

By contrast, Microsoft doesn't really care what you put out for their system so long as it's at the right resolution.

Is that Sony USA, specifically? Because the game is getting a media based release in the UK, and already had one in Japan.

This article is very meaningful .. thanks