I Have To Break Up The Band(ing)

Neat Video is awesome, we've established that already. When I took a look at the before/after shots of Maryuu Senki, I couldn't believe the results... unfortunately, most of those A/B tests were on still frames. Not moving clips. I thought I was done with this whole remaster thing yesterday, and then stumbled upon a nasty surprise... allow me to explain how it slipped through up until now.

Spatial Digital Video Noise Reduction (DVNR) works by simply comparing each pixel to its' neighbor pixels in the same frame, based on an arbitrary threshold of how 'different' any given pixel has to be from its' neighbors to be kept. Either the pixel is turned into a clone of its' neighbor, or it is isn't. It's simple stuff, and while it has uses, it doesn't really do much good on crap like... well, like this: 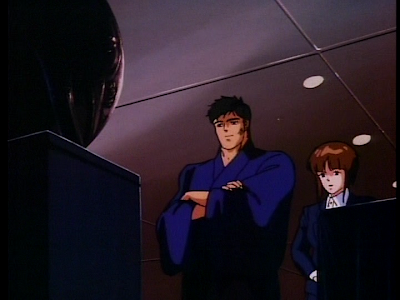 Temporal Digital Video Noise Reduction works by comparing each pixel to the corresponding pixel in the frame before and/or after itself. That allows it to remove a lot more noise by averaging a wider sample, and - in many circumstances - looks slightly more natural when the grain levels fluctuate drastically on a frame-by-frame basis.

Here's the problem: Maryuu Senki is a title with lots of spatial noise, lots of temporal anamolies, and lots of fluctuating chroma changes. This is sort of the perfect shit storm to give birth to the dreaded artifact known as banding - that is, natural dithered gradients turning into chunky blobs of single colors, also known as posterization. The issue isn't really that I have banding - sure that sucks, but there's filters that can deal with it, and it's sort of a natural consequence of DNR with difficult material. It sure beats the source problems, doesn't it?

In a still, or spatially, it looks okay! In motion - that is, temporally - you'll shit bricks.

SEE FOR YOURSELF.
The issue I have with all of this banding is that it literally pulses. It's as if the walls are alive, throbbing and breathing like characters themselves. It isn't just a problem that shouldn't exist, it's fucking creepy. I'm frustrated to find that it's a source related issue - it isn't that the LD had visible banding, but it did have some subtle chroma shifting buried under a very thick layer of noise that, when fused together into more stable blocks of color via DVNR, blends into a fluctuating solid band of color. Slapping grain on top doesn't even hide it; that banding is alive, and it wants to eat my very soul.

At first I thought it could be an issue with Neat Video specifically, but I've gotten almost identical results using the 3D filtering options in FFT3D Filter and Deen. I didn't spot much of this 'pulsing' with Temporal Cleaner, but I did get temporal ghosting, which is even worse than temporal banding fuckery. So I tried using Neat Video without Stab in the chain. Still a bandy legged piss-fest. Out of desperation, I tried using both Neat Video and Deen in spatial-only modes... the pulsing was slightly less obvious, but it was absolutely still there.

These banding problems, even using the exact same DVNR profiles, are simply non-existent on Maryuu Henjou and Maryuu Shinden. This is strictly a problem with the source, and since Maryuu Senki was that melt-in-your-hands, not-in-your-mouth science experiment of mine, it's probably a flaw that dying disc will take with it to the grave. It could even be a source issue, how the heck would I know not having seen a stable copy?

I hate it, I really do. But there's really not dick I can do about it. If I can ever find a new LD that isn't scratched and doesn't melt apart in my hands, the banding and noise would be less of an issue to start with. But until that happens I'm going to have to live with these freaky Giger-gasm walls... oh well. An earnest restoration of a flawed master is still better than the flawed master you start with - and these clips do illustrate plenty of what's wrong with Maryuu Senki to begin with.
at 12:58 AM

Those don't look like video problems so much as exposure problems to me. Do you think an anti-flicker filter before denoising would help a bit?

DeFlicker helped, but at introduced random brightness fluctuations, regardless of "scene" setting.

ReduceFluctuations largely did the trick, but added temporal ghosting.

If only I can find a way to get those nice, stable results without all of the equally severe side-effects...

Thank you for sharing the information, a very interesting article