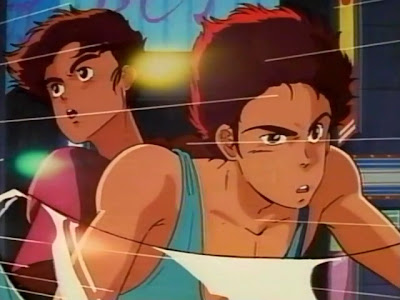 No, seriously. Pitaten, TenTen, Raijin-Oh and a show about racing robots. Say what you will about any of them, but it'd be a bold faced lie to suggest he's not versatile.

*Now available from Anime Midstream! Seriously. I know, I thought they were just making shit up, too!

This is one of roughly a quarter-million tapes that Shin sent me ages ago, and while I'm still fine-tuning the script for a DVD transfer, there is no translation available, and the odds of one existing seem limited without readily available copies making the rounds anyway. So I figured, crap, why not just give some of these uber-obscure titles away to whoever follows the blog?

While the DVD encode will likely receive some additional tweaks, don't let my continued insanity put you off. This is an H264/AC3 file at higher resolutions than a deinterlaced VHS could ever provide, and I think with a touch of post-processing through my usual FFDShow Tryouts settings, it looks pretty damn good.

Oh yeah, the Victor VHS runs about 37 minutes, despite the OAV itself ending after 32. Why? Because the tape included a bonus gallery of animator genga sketches running about 5 minutes as a primitive extra. It's included, and since this particular encode was Quant based it shouldn't have increased the file size exponentially.

Before you think that 23 year old anime about riding a motorcycle with arms couldn't be less relevant to today's rash of of popular fantasy soft-porn and guitar strumming school girls, just remember: The more things change...
at 3:12 PM

Thanks! Always wanted to see that :)
Will you upload the dvd on ADC?

A few other projects may get priority, but I don't see why I couldn't put Dead Heat up on ADC.

Could you please reupload it to another file sharing?