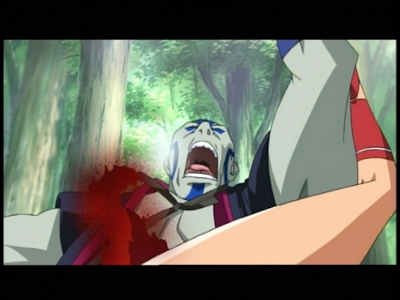 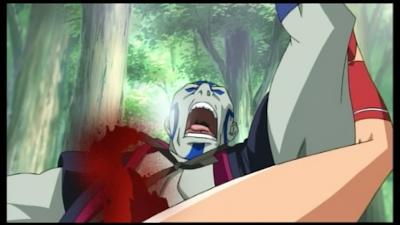 Should I ever talk about doing a new R2-sourced transfer for Legend of the Crimson Ninja/緋忍伝-呀宇種（ガウス）, you have permission to strangle me until I'm legally dead.

It's anamorphic in close to a 1.78:1 ratio, and completely combing-artifact free... barring that constant delayed chroma combing bug I've already explained is a lost cause. Hell, it's still there on the deinterlaced frames! It now has "blend" deinterlacing on frames that would have been combed had I not post-processed them. It's the lesser of two evils, and if anyone has a problem with this decision, they can upscale the R2 themselves.

I struggled with more settings and plugins than I'd like to remember, and still found this to be the least fugly solution available. It's not as pretty as I wish it were, but with the mixed 24fps/30fps material and "bad" 3:2 edits, to say nothing of the insignificant motion on the dialog scenes, there's absolutely no way it's ever going to be any better. The EroBeat download had similar problems, but they even went with an even uglier form of cubic deinterlacing.

Honestly, what do people ever see in that jagged shite?

The dot-crawl has been handled to the best of my ability: it's completely gone on static objects, which is the best any comb filter can ever claim without causing severe side-effects. The entire image has been ever-so-slightly enhanced to compensate for the noisy and low-resolution source material, and this was not a decision I made lightly. It'll all be encoded at a high bitrate for DVD.

DVD extras will include the original trailer (download quality, I'm afraid), character designs, production galleries, and on-disc liner notes. I'm considering throwing on a few Easter Eggs, but we'll see how I feel about them once the rest of the disc is done. Last thing I want to do is pile it with stuff that comes off as tacky.
at 8:39 PM