Give me Sanctuary, or Give Me Death!

*Whew*... I've finally got over half of that big-ass project out of the way, and even got paid for much of it, so now I can spend the small fortune I've amassed on a new computer designed to make my general workflow of recording, ripping, restoring and producing DVDs faster and easier than ever before. Even excluding the H264 decoding video card, I'll have at least twice the CPU power, 3x the HDD space, and twice the RAM at much faster speeds. At last, the only thing I'll be able to legitimately blame is my own laziness!

To celebrate, here's some A/B comparions of the newest laserdisc to come down the Kentai pipeline, none other than the Takashi WATANABE directed adaptation of SANTCUARY, a politically minded yakuza thriller that was actually released on dubbed and subtitled VHS back in the dark ages by Viz. 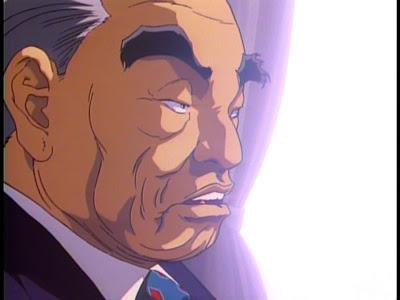 Source (No Filtering)
As you can see, the LD isn't half bad. Colors appear strong and life-like, there's very little in the way of gate weave and print damage, and it's one of the least noisy discs I've had the pleasure of putting into my player as of late. But I've got a feeling I can still make a good thing even better... 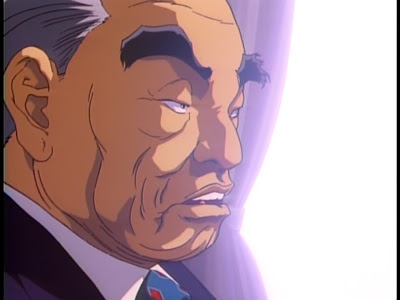 Neat Video - "Remove Only Half of Noise" Profile
One great thing about Neat Video is the fact that it has numerous profile presets built in that work independently of the noise snapshot you feed it yourself. You can customize them, of course, but there are so many of them that odds are you'll never have to. In this example I'm removing 100% of what the map considers chroma noise (and it's removing rainbows as a side-effect - how cool is that!), but only 50% of the luma noise. This allows me to smooth more of that analog background crawl associated with LD without destroying as much potential motion or hard edges... but, of course I do that at the risk of keeping more compression artifacts and noise in the grayscale. For some sources, this is a real life saver. 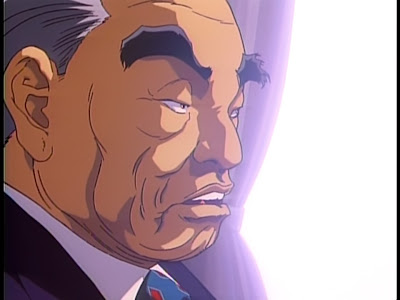 Neat Video - "Filter and Sharpen"
I've not used the current profile much, but the results are more impressive than I'd like to admit... it's filtering the luma by 60%, which smooths out even more of the noise in the source, and the outlines in the old fart's face are enhanced to the point where they're sharp as a tack. Unfortunately, that sharpening comes at a cost; while the LD already had a little bit of EE, the sharpen filter adds further ringing on top of that, creating false edges that - particularly on the eyebrows and the side of his noggin - look downright glowing. This can be fixed by turning the sharpness down (it's at 100 of a possible 250), at the cost of apparent sharpness, naturally.

As you can see, the filtered version without sharpening looks softer than the source, but part of this is because the natural side-effect of spatial DVNR is softening, and temporal DVNR wipes out the random noise that "looks" like detail, even when it's not - and I flatly refuse to call the analog chroma gunk found on any LD I've recorded "detail" in the way I would consider film grain "detail". So, not only does the filtered version remove some detail, but it makes the transfer look like it has less detail, even though you'll be losing much of the compression and random video noise in motion. The sharpening filter makes it look like your video is sharper, but in reality it's just manipulating the contrast around high contrast luma edges, and creates halo artifacts in the process. It's kind of a no-win situation; you can't legitimately use DVNR to get rid of analog video noise and make your video sharp at the same time without adding ringing filter into the mix.

It's entirely possible that there's better sharpening filters outside of Neat Video, or that I may decide that the soft look coupled with a light coating of digital grain is more than satisfactory. I'm also experimenting with deband filters before the DVNR, which is working wonders on crap like the block-riddled collar in the above examples.

I'll need a bit more time to figure out what's best for the source, but I'm confident that once I'm sure of what to do, it'll be encoded at least twice as quickly as it would be on my current rig. Kentai's new computer will be a boon to us all, in the end... I only pray that it doesn't link up with Skynet and then crush my head in my sleep.
at 5:21 PM

You'll be including the dub on your release of this, I hope... ;)