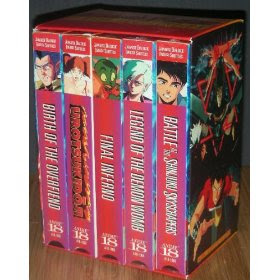 Legend of the Overfiend: The Movie will be priced at $19.99. No word on extras or if the Japanese titles will be restored for the first time in North America, but as the solicitation lists "English subtitles", we can only hope that this isn't yet another re-release of the former Anime 18 DVD.

Legend of the Overfiend: The Complete First Series will be subtitled-only, and sell for $24.99. This will be the first time in North America that the original 3 episodes were available without their sister-sequel, Legend of the Demon Womb.

Calling the original Choujin Densetsu saga "The Complete First Series" gives me hope that they'll be releasing the entire franchise anew, but only time will tell if we'll see any special features at all, or indeed if these discs will be any different from their prior incarnations. An uncut version of Inferno Road? Workprint footage and storyboards? Perhaps even The Final Chapter? The mind boggles at these new possibilities...

I can only hope that Media Blasters will give this legendary epic the release it's always deserved.
at 12:52 PM

I am surprised and happy about the release.