The trouble is VHS is prone to analog distortions, including wear on the tape. It so happens that an older copy of Beautiful Sisters Flesh Slaves/美姉妹肉奴隷 had some pretty heinous tape rolls thanks to some wanker constantly re-watching the sexier moments of the feature, and since the whole goal of me recording a fresh tape was to improve on the old hard-subbed bootleg VHS, this seemed like a bit of a waste.

Here's a screenshot of the "new" tape we bought in the hopes that we'd finally have a pristine source... and no, that thing doesn't go away for at least the first 5 minutes: 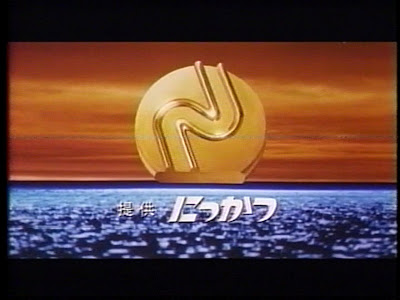 Well, so much for that plan... right?

Here's the scary part: BOTH copies have this weird center-stripe! It must have been a problem on either Nikkatsu's master tape or perhaps their duplication equipment, since the odds of two separate copies having the exact same issue due to identical tape wear are so astronomical I don't even know what kind of calculator I'd need to crunch it out.
I know, all's been quiet on the Western Front lately. A combination of for-hire work, relearning fundamentally broken DVD authoring software, and playing the hell out of ninja jiggle simulators has left me without the will to do much else. There's quite a bit of weirdness going on behind the scenes that I hope will be enjoyed by many, but we can talk about that later.

EDIT: Well, this is strange...

As per usual, I recorded the 72 minute feature (82 my ass, box art!) on two DVD-RW. Disc 1 plays and rips without issue, Disc 2 freezes at 15 seconds in. There's no scratches or scuffs on the disc, so I can only assume the dye has deteriorated to the point where it's just not stable anymore. I've got another 10 DVD-RW kicking around, and recording the last 10 minutes over is hardly the end of the world. I've just not had this happen, ever, in 5 years. It amuses me for some reason.
at 4:29 PM