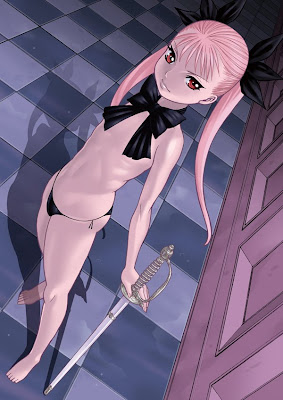 
* Whether the average person, applying contemporary community standards, would find that the work, taken as a whole, appeals to the purient interest.

* Whether the work depicts/describes, in a patently offensive way, sexual conduct or excretory functions specifically defined by applicable state law.

* Whether the work, taken as a whole, lacks serious literary, artistic, political, or scientific value.


IF the work should fail all three tests, it's ruled obscene, and the penalties for "receiving" obscene material are a minimum sentence of 5 years jail time... yet pleading guilty to merely "possessing" obscene material carries a much less harsh sentence. This has given the American legal system a plea-bargain trap for anyone who's caught buying, selling, or even just owning obscene material - which, mind you, can be any record, book, film, drawing or photograph of essentially anything a government prosecutor can deem "offensive sexual conduct".

Manga fans should know about obscenity all too well these days... Christopher Handley was tried for, and pleaded guilty to, charges of obscenity for various pornographic Lolicon ("Lolita Complex") works in May of 2009. That's right, land of the free. He was sentenced just last week to six months in half-way house, and even lost his extensive non-pornographic manga collection... all for importing a few fucking comic books.

We're already seeing a knee-jerk reaction to this case, as FUNimation has just announced that DANCE IN THE VAMPIRE BUND, the currently-airing gothic horror/gothic lolita title from director SHINBOU Akiyuki and adapted from TAMAKI Nozomu's ongoing manga serial, will be censored both on its' internet-only streaming broadcast, and home video. The former is almost expected, the latter is quite a shock in this day and age.

FUNimation is currently streaming episodes 1-4, and as I had feared, the second episode not only features digital censorship of nudity, but also cut over a minute's worth of footage. 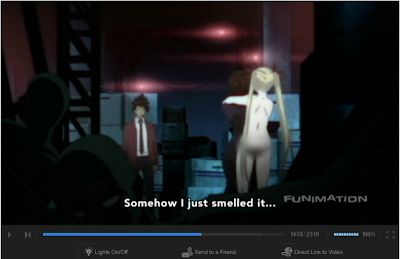 FUNimation issued the following statement on their blog, after a viewer pointed out that the US stream was more heavily edited than the Japanese TV broadcast, with the bold emphasis being my own:

“FUNimation Entertainment is known for releasing the titles we license in their original, uncut form, as their creators intended. However, after viewing the unedited as well as the Japanese broadcast edit of the series “Dance in the Vampire Bund,” we have determined the series contains controversial elements which, when taken out of context, could be objectionable to some audiences.

With this in mind and with approval of the licensor, we will edit select scenes from the series in streaming and home entertainment release. These are scenes which are inappropriate for U.S. viewing and are not essential to the storyline.

“Dance in the Vampire Bund” is a complex and dark drama cited by press and fans as one of the best anime series out of Japan this season. Its strong story is what brought the series to our attention and why we are bringing it to the U.S.”

Seig Heil, Herr Fukunaga! Funny how it goes from being "controversial elements which, when taken out out of context, could be objectionable to some audiences", to "These are scenes which are inappropriate for U.S. viewing" from one paragraph to another. Aren't you glad that FUNimation entertainment has flatly decided what you, as an American, should be watching? FUNimation certainly have the right to censor a title you hold the rights to and avoid a potential PR shit storm, but they have absolutely no place telling anyone else what is and isn't "appropriate" in this - or any - country. I guess they could have taken this one step further and said the material "is simply inappropriate" and alienate the Japanese companies they work with, but clearly saving face with Japan is more important to them than looking respectable to their consumers.

What's particularly sad here is the fact Seven Seas, the distributor who pussied out on the lolicon satire Nymphet: Kodomo no Jikan, have already published the first six books of the manga, which is more graphic than the TV adaptation, without any censorship at all. Seven Seas' has the strict policy of not censoring internal* artwork, and simply opts to not release a title they feel uncomfortable releasing in American bookstores, even if they've already announced it. This is a gold standard by which no other American manga publisher operates, and for that, I adore them. Now, if they could just not slap fugly covers on Wicked City and Spice and Wolf...

*What this means is they're only willing to modify the cover artwork, and indeed, vol. 5 has used some "creative" logo placement to hide Mina's assets. But not a scrap of the actual content within has been modified, so I could care less.

FUNimation hasn't released a product in an edited-only format since they were "The Dragon Ball Z company". They made great strides to convince the rabid hardcore fanbase that they were only going to present their home video releases uncensored, and up until this week, they had done exactly as they'd promised - even with "extreme" titles including Blue Gender, Speed Grapher, Shigurui: Death Frenzy and Rin: Daughters of Mnemosyne. They've even gone as far to release unedited versions of not only their own properties, but "rescued" the occasionally brutal pirate adventure One Piece, a title that was rendered both irrelevant and unwatchable by the previous rights' holders, 4Kids, and re-release the title from the beginning completely uncensored.

So what's the goddamn problem?! 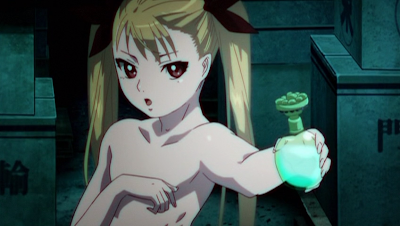 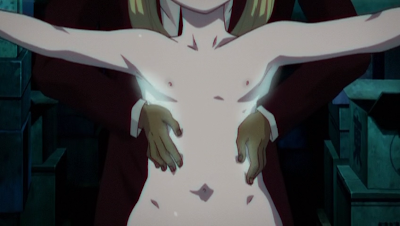 In this scene, Mina - the immortal lolipire, who's 9 year old form is really just a ruse to shrug off some unpleasant responsibilities she might otherwise have to contend with - is chiding her amnesiac lupine manservant Akira into smearing her with a UV-protection lotion enabling her to walk in the sun without bursting into flame. SPF 5,000, I'd wager, a product as popular with vampires as it is the Irish. Akira himself is made uncomfortable by the whole thing, but he's certainly not molesting her. If anything, Mina's simply testing and teasing him, hoping to draw out some of his repressed memories, and give her favorite plaything something to grumble about.

In the end, over 60 seconds was removed from the second episode entirely. If you're interested, you can download the entire second episode using any torrent search engine - like ISOHunt. In any other circumstance I'd suggest that anyone curious about the show check out FUNi's free stream, but I refuse to support this needlessly edited version of the program in any way I can reasonably avoid. I don't know if later episodes will be edited - or if they are, in what way - because even viewing the FUNi streams are giving them a minuscule level of revenue.

Could the above be tried for obscenity, landing either a consumer or even a FUNimation employee in real butt-pounding jaim? Sure, theoretically. But it would never stand up in court because it's not pornographic, and the whole show isn't purient - this isn't anywhere near as offensive as several other FUNimation properties, it just involves a younger looking character, and that made their PR department nervous. The odds of a self-righeous "Save the Children" group publicly crucifying FUNimation is actually more likely than any legal charges being brought against them, but even then, the more-offensive and unabridged manga from Seven Seas is already there for them to start shit with.

The issue is that FUNi has more lawyers than SS, and more lawyers make you tread more carefully, wither you really have to or not. They chose cowardice over an imagined threat of controversy from strangers, and in the end only pushed away the people who probably would have been their best customers for the title.

Titles including Dragon Ball Z and Afro Samurai were made available both in their censored TV broadcast and "uncut" editions on home video. Titles like Strike Witches were initially broadcast as censored online, but are being released uncut on DVD. Holding aside complex music rights issues (which I can't fault FUNimation for), this will be the very first time FUNimation has released only a censored version to the North American marketplace, and the fact that they censored it themselves is more troubling than had they merely been denied the unedited home video version. This is a matter of our freedom as consumers being stripped from us, and I for one will not be supporting FUNimation's bastardized presentation beyond having checked the streaming version of episode 1 and 2.

As for the show itself... honestly, it's kind of a mess. A combination of internal Japanese broadcast censorship - most of it more concerned with violence than nudity - has already made much of the show's action incomprehensible, and the limited budget and/or production difficulties on the thinly spread SHAFT animation staff has left the program looking a bit like the 21st century equivalent to The Violinist of Hamlen. The show is most certainly full of flaws, but the core story, characters, and limited-animation aesthetic from director Shinbou have all combined into a fascinating mess I can't take my eyes from. I'd have bought this show on DVD/Blu-ray in an instant, but if FUNimation is going to only offer the censored version, I'll be keeping my money... and continuing to watch the show via unlicensed fansubs. FUNimation has no one but themselves to blame for this, either.

In closing, eat a dick, FUNimation. Just make sure it doesn't look like it's 9 years old before you pay for it.
at 2:32 PM

Excellent write up. I'm SO sick of this whole moral panic
bull that's been going on lately within the anime/manga scene. People are not think critically and are just knee-jerking to ANYTHING that can be remotely pedo.

Shame since it seems like Funimation was starting to be cool and release stuff like Strike Witches and Mnemosyne. But no, they go and do this.

Even though I haven't seen the show and don't really care to see it, it's the notion of this controversy that matters.