Since it's easier to simply link to the comparisons than steal the images outright, I'm just going to thank the good folks at Caps-A-Holic for confirming a theory I've had for quite some time and then give you my findings here.

DAWN OF THE DEAD


DAY OF THE DEAD

I've assumed from the start that Arrow Video would have used the Anchor Bay telecine for Dawn and Day of the dead respectively, since no other HD source for these two Romero zombie films were known to exist. We also knew that the Dawn of the Dead transfer in the UK was "different", and early promotional images promised a much grainier and, one would hope, more accurate presentation of the camera negative... that's not quite what we got, though, and I finally am starting to think Arrow was lying through their teeth about what source materials they had to work from.

The Arrow Video transfer of DAWN is slightly better than the Anchor Bay transfer in terms of raw detail, largely because there hasn't been any scratch-repair done on the print. I know, you'd think that would be a bad thing, but automated scratch removal filters - particularly when they're not used properly - tend to eat away at edges and small details that really AREN'T film damage. 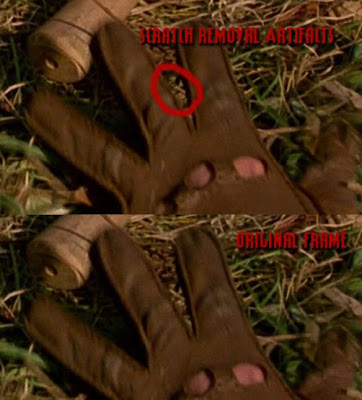 Compare cap 3 and look carefully between the gloved fingers - you see those brown spots on the US transfer? Those are areas of grass incorrectly reported as "dirt", and filled in with the prior frame's glove information. The grain has also been softened out, a natural side effect when the process finds randomly dancing patterns of crystals to look suspiciously like a smattering of minor scuffs. 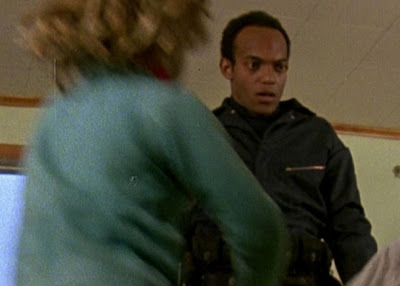 (Arrow Video)
Anchor Bay didn't get rid of that fucking scratch, either...

On the other hand, check out the 7th comparison to see why Anchor Bay would stoop to such digital short-cuts in the first place... the Dawn negative just isn't pretty. Wither you prefer looking at film damage, or the artifacts left over from their removal is a deeply personal call, and one I feel varies from situation to situation. Perhaps I'm a fuckwit for thinking this way, but I'd much rather see some mild dirt spotting than equally heinous digital artifacting on my 30+ year old fantasy-horror films. These shots don't look anywhere near as bad as similar problems on AB's release of Tenebrae, but I'm not convinced these images are even close to the worst of it, either...

The bad news for Arrow Video is that the Anchor Bay "Divimax" master has much bigger problems than scratch removal artifacts. One of the biggest problems on both transfers is the constant ghost-inducing DVNR issue, and can be seen in the 4th cap... personally, just posting this makes me puke a little in my own mouth. 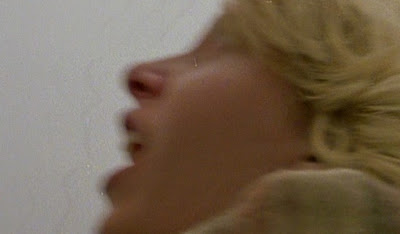 This frame is very is... strange, though. Typically you blend frames together temporally to remove grain, but Dawn is just as gritty in HD as it ever was on VHS. My theory is - and has been for a while - that what we're seeing isn't actually 35mm film grain, but high frequency digital noise dusted on top to emulate film grain - or "Digigrain", as I love to call it. Using DVNR before scratch-removal increases the level of dirt you can remove without much affecting constant details in the frame, so it makes sense to do it from a production standpoint... but, as you can see, the "improvements" it makes to the presentation are negligible to the other issues they tend to bring with them, including both a general loss of detail, and... whatever the hell we're seeing up there.

Odds are the trail-inducing DVNR was baked into the HD master tape via the telecine hardware, so the only way to un-do it would be to pull the negative out of storage, and then make a brand new transfer from scratch. It's very time consuming, and even more expensive, so the AB print is the one we'll be stuck with for quite some time. Italy and Germany seem to have sourced all of their recent DVD releases from it, so odds are until Anchor Bay themselves are dissatisfied, this is simply how Dawn of the Dead is going to look. It's pretty disappointing, but still far from the worst cult movie restoration I've seen this decade...

Even worse news is the fact that Arrow really dropped the ball on DAY. The 4th cap comparison sums up every problem this disc has; even compared to the already less then stellar Anchor Bay BD transfer it's soft, full of compression artifacts. For one reason or another (likely cost) Arrow used a single-layer BD25 instead of the dual layered BD50, and to compensate the transfer was vertically filtered, though as you can see that doesn't mean it isn't without compression artifacts. Neither of these factors, however, explain why the transfer is stretched into the wrong aspect ratio of 1.78:1... Dawn was left slightly open-matte by Arrow, which is fine, but Day shows blatant geometry problems from having been stretched vertically.

Both transfers have a slight disparity in color, and I'm not convinced that one is inherently superior to the other. While the Anchor Bay transfers seem to have slightly elevated color saturation, the flesh tones on the Arrow releases seem less true to life - the actual hues seem to shift from scene to scene on the Arrow release, being orange one scene and green the next, which makes me think Anchor Bay did further color correction on their transfer. Come to think of it, the color "boosting" on the AB release could be an encoder issue, or even a colorspace one... hard to say, really. Both discs have their original mono mixes, though Anchor Bay only includes them in DVD quality Dolby mixes.

Arrow Films' slaughters Anchor Bay in the extras department, but as the UK disc will set you back over twice as much as their American counterparts, you get what you pay for. The transfers are almost a wash, with Anchor Bay being slightly better on Day and Arrow Video (arguably) being slightly better on Dawn. If you have a goofy packaging fetish... well, then you're probably best off importing one of those crazy German Hardboxes anyway.

The Arrow Video release of both Dawn of the Dead and Day of the Dead mark the single most comprehensive assortment of special features available, and if you only own them on DVD then either Blu-ray releases are a notable - if not major - improvement. I really do want to support Arrow Films, despite being a Yank, but unfortunately the materials for Romero's zombie epic just aren't up to snuff to excite me for any High Definition release of these genuine American classics. This isn't a "Fuck You" post towards anyone, just one of mild professional curiosity, and of ever so slightly bitter fanboy disappointment.

I'm going to keep my fingers crossed and hope that Blue Underground doesn't happen to wipe the floor with them with their transfer of City of the Living Dead next month...
at 7:36 PM