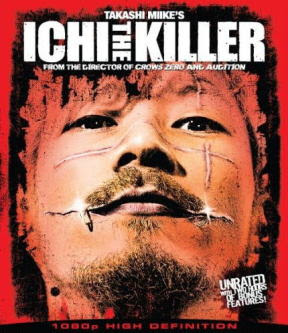 While in many ways this is not Takashi MIIKE's best work - that honor would likely go to Audition, The Bird People in China, Izo, or even Agitator (depending on your mood and native level of pretension) - it is still without a doubt his most gruesomely offensive, morally ambiguous, and internationally cherished film to this day. Despite the intentionally broken cinematic pacing, ultimate anti-climax and the fact that this jaw-dropping freak show is actually less disgusting than Hideo YAMAMOTO's original manga, it's anchored by strong performances from Asano, Syun, Oomori and Tsukamoto, and the biggest flaw the film has is in literally cock-teasing the audience (and the film's anti-hero Kakihara) with the titular Ichi... in effect, the whole film is about trying to find something that doesn't quite exist, and while the manga makes that painfully clear from the first chapter the film is - wisely, perhaps - more secretive of its' anti-villain. The final showdown is unforgettable, but not for any of the reasons the genre would leave you to expect... which is at once the strongest weakness in the film, and perhaps Miike's greatest facet as a film maker to start with. This may not encompass Miike's filmphraphy in one neat little package, but it does showcase both his strengths and weaknesses, and for fans this BD has been a very long time in coming.

As much as I would love to include screenshots, the "modified" version of my software based AACS descrambler won't let me without an update I can't access. I know, it serves me right, but seriously? $79 and change for a program that only decrypts data, and a license that has to be renewed annually? Suck my annual hole...

Here's the good news: Ichi the Killer has never once looked better, probably not even at a fancy festival on 35mm. The film is still hazy, gritty and unpleasant to look at from a purely aesthetic point of view, but if you expected any different you've probably never seen it before anyway. Ichi is a dirty, nasty little slut, and considering the pulp roots of the material and the fact that you're literally watching the perfect exploitation film for sadism-junkies, I can't say a little heavy grain on top of print damage mars the experience.

Naturally the uncut 126 minute R-18 version is included, as are every single one of the special features from the "Blood Bag" special edition. It's still missing a couple of the interviews and various still galleries from the Japanese release, but to make up for it we get interviews with... Eli Roth? I'm still not quite sure what the fuck he's doing here, but hell, I'm the only guy on the planet who liked Hostel Part 2 so I'll give him a pass on this one.

Audio comes in both original Japanese and English dubbing - and by "English" I mean "Low-end British dinner theater performers in a booth", so it's kind of its' own lulzmachine. The 5.1 tracks are lossless Dolby TrueHD, while the 2.0 mixes are standard 192kb DVD quality. The TrueHD track wins by default when pitted against the R2 full-bitrate DTS track, so anyone who takes issue with the audio mix has to complain to the sound designer himself.

What does disappoint, sadly, is the 1080p AVC compression. I'm not going to tell you that [bitrates = quality], because it really isn't that simple... a high quality encoder can produce a better looking encode at a lower bitrate, if the encoder itself is really just that good. Another issue is that there are some incredible encoders on the market, and 95% of the users don't have a clue what to do with them... as a guy who used CCE SP 2.70 for a several years without actually understanding what the "Quantizer Characteristics " setting does, I can relate, especially when most of the guys who come into this are editors first and compressionists second. (In fact, I doubt the title "Compressionist" even exists outside of a few oddly specific industry situations.) Encoders are amazingly complex programs, and even if you know what you're doing the coding can be flawed or the instructions so vague that well-meaning settings result in disaster.

Complex material requires higher bitrates, more complex algorithms, or for the high frequency information to be filtered rendering it inherently less complex. You can mix and match any combination of these three options, but at the end of the day grainy video plus low bitrates divided by shitty encoders is a recipe for disaster... and that's exactly what happened to Ichi. The film is extremely grainy, but the grain regularly breaks up into blotchy mush, and fast-motion tends to create nasty mosquito-noise artifacts similar to those found on insanely complex titles like 300. The slow-motion shot of Kakihara on the roof has never looked better, but the fine grid-work of chain-link fence is murder on the encode... if you can't spot it there, odds are you never will. The film proper only takes up some 18.59 gigs of the 24GB BD-25, and yes, I'm quite certain that having shuffled the extras to a second DVD-9 or having used a BD-50 would have made a substantial improvement on the transfer.

If compression were the only issue that would be a mark against the disc anyway, but the fact that the brightness looks to be turned up too high only makes matters worse. Ichi is, at times, a very dark film, and instead of looking into a black hole the whole image has a washed-out, milky quality. It could be a colorspace error or something equally similar, but that doesn't make it look any less awkward on the screen. I suppose I applaud MB for being damn sure not to crush the black levels, though...

All that bitching out of the way, the disc doesn't appear to be caked in DVNR or EE, and the contrast looks surprisingly natural. The color timing is very harsh and yellow, similar to the Japanese and American DVDs. It's not a stunning visual presentation, but it's very much like watching a decent 35mm print in a well maintained theater... with some compression artifacts, just for good measure. The disc certainly looks and sounds better than the blood pack SE DVD, but it doesn't look or sound stunning either. Fans (like me) will be delighted to have it at all, and to be honest, I can't picture any other English-friendly label tackling this film for a while.

IF I can ever get screencaps, I'll be sure to do a full comparison with the Blood Bag release.
at 1:26 AM

I'd buy this if it had an "Eli Roth masturbates" commentary track.

The Roth introduction for the film isn't that far off.

Besides, the Miike x Yamamoto commentary track is the single greatest commentary in the history of the world.

"How did you make that semen? It's so gross!"

"Well, funny story. Tsukamoto would get excited on set, so we decided to give him a bucket, and between takes..."

I guess Ichi is in an immortal tie with Driller Killer, with Abel Ferrara struggling to slur out a single half-comprehensible thought between his booze-addled memory, urge to spank the monkey and cussing at random over stuff distributors took out that he'd forgotten about.

I haven't tried it yet though.