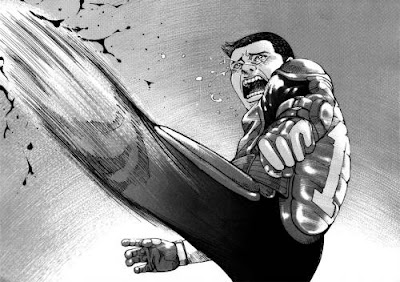 So, my first hand impression of Ichi the Killer on Blu-ray... again.
Having taken the time to play the Media Blasters BD and DVD on the same setups, here's what I've found:

So, it's got to be the same exact transfer Geneon released on DVD in Japan circa 2002. That may or may not be a bad thing... let's continue.

* The black levels are totally screwed up on the Blu-ray. Setting the DVD's dynamic range to 16-235 - or making the video appear roughtly 7.5% brighter than they should to account for old analog NTSC standards - makes the DVD black levels look identical to the Blu-ray at 0-255.

In other words, the DVD has proper "digital" black levels while the Blu-ray needs to have the display adjusted manually for optimal blacks. This is surely an honest mistake, and one that can be fixed by the end user, but it's still unacceptable for an "HD" Blu-ray title to even have this problem. What the fuck is this, 2002? (Oh, wait...)

* The level of digital noise inherent to the transfer is not remotely consistent with any other HD transfer I've seen before.

Now, remember how I mentioned the noise/compression was an issue last time? Having compared the two transfers further, I'm starting to think the issue isn't compression at all... I think what we're seeing is analog noise from the source tape.

And I don't think that source tape is anything close to HD-CAM, either.

Dragon Dynasty has been pawning off PAL SD upscales as "1080p Full HD" for a little while now, and despite the fact that Woo's The Killer passed the rudimentary Downscale Upscale test, I'm no longer convinced that it isn't an upscale. In fact, I'm damn sure it is - and I'll share why with you later on. The fact is an NTSC upscale can look pretty good, if the upsampling algorithms are there and the Digibeta source isn't just shit to start with. There are some god-awful upscales, but there are also upscales like Diebuster: The Movie and Final Fantasy VII: Advent Children Complete, which fool most reviewers into thinking they're "real" HD animation. True, most reviewers are mouth breathers who wouldn't spot interlacing artifacts with a looking glass, but that does say a lot about how little resolution itself relates to a "pleasing" image, particularly when expectations are so low to begin with.

With that in mind, I'm not one bit convinced that ICHI THE KILLER isn't an upscale. A very good upscale - black levels aside - but it does explain why the image is soft and noisy at the same time, and why that noise looks more like blocky chunks of analog source noise than typical compression artifacts or banding.

The easiest way to look at it is this: Do you really thing Geneon would spend the money to transfer Ichi the Killer in HD circa 2002 - and not even mention it? For fuck's sake, the Japanese DVD was interlaced for the last 40 minutes of the film! If that now very dated Geneon transfer was in SD, so is this Blu-ray, end of story.

Suddenly, Media Blasters having delayed this title for a year and a half makes perfect sense: They kept asking IMAGI for an actual HD master, and eventually gave up, releasing an upscale instead.

Shout! Factory learned the hard way releasing Audition on Blu-ray that Japan isn't interested in restoring their own extreme Miike cult films, and if you want to restore it yourself you can have a chewed-up Internegative - and like it. Sirabella is clearly having none of that, and while an Interneg would mean more film grain and print damage (like cue marks and physical splices), it would also mean more detail than an upscale of a nearly decade-old Digibeta, and be much more deserving of the moniker "1080p High Definition".

That off my chest, I do stand by almost everything I've said prior: black levels aside, Miike's violent excess has never looked better, and short of the film getting a brand new transfer from the negative, it never will.

Could it look better? Absolutely.

Will it? Christ, it took us 8 years to get this far... your guess is as good as mine.


Oh, well. At LEAST Media Blasters' latest release of Utatane's COUNTDOWN includes the uncensored skull-fucking episode which has never been released in North America before. You win some, you lose some...
at 12:10 PM

Hopefully they won't try and pull this shit with film-based anime on Blu-ray, if they ever actually release any.