The Unfaithful Wife is Back in The Bedroom 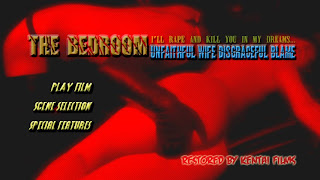 Yeah, yeah, I know. I'm very slow.
So how do we make that fact into a drinking game?
Well, this is just... weird. In putting together the Kentai Films DVD of Sato's THE BEDROOM I checked a couple scenes on both the UK DVD and the Japanese VHS side-by-side, hoping I could figure out why the difference in runtime was so massive. The UK DVD cuts a 13 second shot of a man stripping his wife's underwear in an alley (despite the fact that he's forcing her to have sex still being quite evident - oh, that wacky BBFC!), but the difference in runtime after that is still well over 2 minutes!
So I'm thinking maybe the UK transfer was from a 'real' PAL source. That'd explain about 2 and a half minutes' difference, despite the UK DVD being an NTSC release. It's clearly a dump of Wide Sight's hard-subbed VHS transfer from the mid 1990s, so it's not unthinkable that the two cuts were sourced from separate NTSC and PAL transfers - at least initially. The title sequences are completely different too, so it's also possible that Sato (or a meddling producer?) decided to re-edit the film's pacing subtly by cutting a frame here and a shot there... I think it's just 24fps vs 25fps, though. I really do.
I'll admit it, the UK DVD is marginally sharper than the Japanese VHS, but it's also much noisier, has absolutely wonky contrast and constantly strange looking color timing, is littered with print damage and has nasty looking hardsubs. he Japanese tape, naturally, looks like any old fuzzy VHS, but at least it's not infected with virtually unreadable subtitles... 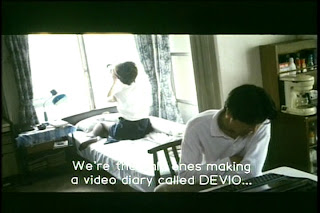 FULL DVD QUALITY!
Anyway, the Kentai DVD will include the Japanese VHS bonus materials - a trailer for 盗撮レポート 陰写/TURTLE VISION*, and a brief interview with director Hisayasu Sato - as well as the alternate UK title sequence, and the "extreme" scene the BBFC deemed too damned hot for Glasgow (and the rest of Scotland, plus parts of Wales).
The UK titles are clearly printed to 35mm while the Japanese tape has video generated titles, and of course the on-screen titles are completely different. The UK release is "Unfaithful Wife, Disgraceful Blame" (or so Wide Sight tells me - I'm too lazy to check the kanji myself) while the Japanese release is "I'll Rape You And Kill You In My Dreams"/夢の中で 犯して殺して, marking the single best exploitation film title, EVER, in any fucking language.
It's been a good while since I've had to use DVDLab Pro, so the actual authoring will take a day or two while I get all the bugs out of the menus and multiple VTS structure.
*Yeah, the actual English title would be something like "Vouyer Report: Shady Copy", but keep in mind that most of the English titles Sato films go under were made up by some crazy non-Japanese speaking uberfan who just made all this shit up...
at 10:40 PM