BLACK HAIR VELVET SOUL is just about ready for release. The transfer took longer than I had anticipated due to some framing oddities in the final reel... basically, the script I use to keep the film from shaking has the side-effect of making the entire frame "twitch", and if you don't manage to crop the frame it can look like the telecine had a seizure. I had cropped the frame properly, but there's two shots which - for some reason - are much less wide, and those had to be fixed or they'd look like the edge of the DVD was vomiting up its' own brain. The rest of the frame, however, looked pretty goddamn good.

I'm almost disappointed that SoftEncode's built-in filtering was enough to eliminate the worst of the analog hiss all on its' own. Don't get me wrong, the filtering I put the source through still had quite a bit of merit, but it'd be like if CCE SP had its' own built in comb filter rendering my attempt to eliminate dot-crawl all but pointless.

On a "Serious" note, another official DVD production project has seemingly been checked off the list - at least, barring licensors wanting the subtitles changed for one reason or another. I don't think the guy I'm working with has ever dealt with them before, so this might be a learning experience for both of us.

Fun thought: Any of you guys out there ever heard of Homeroom Affairs/他人の関係? It was evidently a two-part OVA from 1994, based on a manga by Ichirou ARIMA, and as far as I can tell may have been the only title released on home video from the short lived Star Anime Enterprises company. Well, that and some show about a kid who plays soccer with... dinosaurs?!

...what?
...the fuck was I just talking about? Oh! Homeroom Affairs, got it. I stumbled across both episodes on DVD recently, figured it sounded cute enough, and downloaded them on a ratio-scraping whim. I've only had a chance to watch the first 10 minutes or so, but the short of it is that it's about a younger girl who uses her blossoming sensuality to emotionally torment an older professor who has zero interest in her as anything but a student, and maybe just a casual friend. Now where have I seen this story used in recent days... 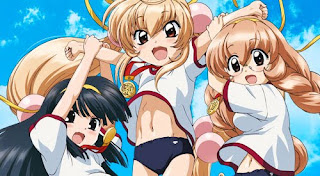 ...nope. Can't think of any.
I guess my point is less that Kaworu WATASHIYA is a filthy concept stealing frog-beast, and more that people need to chill when a concept gets re-used so often. The last film I worked on was effectively a fantastic retelling of Romeo and Juliet, and I didn't really have a clue that it was for the first two reels says you can spin an old yarn into something you've never seen before and still enjoy it quite a bit. If anything I'll be curious to see how Homeroom Affairs keeps the show spicy and hi-larious without needing to resort to exploiting vaginas under the age of 12. That's just got to be an upskirt uphill battle.

Have I ever mentioned here that Kodomo no Jikan is a much more charming and introspective title than its' lolita complex satire roots would suggest? Probably not. Consider it said, then.

So, if you need me I'll probably be playing inFAMOUS for the next week before diving head-long back into productivity. Yeah I know, I'm a cheap bastard and always wait 'till nobody cares and the price drops to less than half, but it's still fun a year later, damn it.
at 10:33 PM