To Felch A Predator 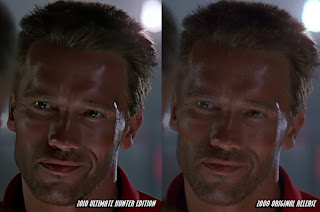 A rhetorical question, ladies and gentlemen:
Which of the above images looks more like film?
Caveat emptor: The upcoming "Ultimate Hunter Edition" of PREDATOR - favorite cult film of 1987 for being a sensation for action junkies, alien aficionados and vaginophobics alike - is kind of a big old piece of shit.

Grain oblitherating DVNR in and of itself I can try my damnedest to ignore, but it looks like Fox has gone so far as to replace Arnold with a freakish lifesized action figure of himself. That's probably a better alternative than looking at the flabby Govenator running around jungles with his shirt off today, I admit, but with Predator having been released nearly 25 years ago, this is just plain silly.

To be fair, not every shot in the new Predator: Greased Piggy Hunting Edition is quite this bad. The whole transfer has a boosted, filtered look, but since DVNR algorithms these days automatically tune themselves lower on material that doesn't "look" as noisy, the level of smoothing varies from shot to shot. Even so, the fact that any shot looks this bad - despite a higher bitrate and a superior video codec! - is only totally inexcusable.

The original Blu-ray had blocky bits of MPEG compression noise mixed in with the analog film texture anyway, so it really wasn't that high a goddamn bar to jump in the first place. There are a multitude of grouchy videophiles who were less than pleased with the initial release, and I wouldn't doubt that a newer telecine could have improved color and grain structure... but generally speaking, these people are crazy. The old BD was sharp, gritty and every bit as ugly as Predator always has been on home video, and the post-production work on this is somewhat infamous for having used plenty of optical tricks to zoom-in less than ideal footage. Fox may well have "remastered" Predator by blurring the snot out of it to shut the people who didn't like the original release the hell up, which makes me more sad than I can rightly explain... you get it pretty much right the first time, and then screw over the Ultimate Edition to please the ignorant masses. Brilliant.

What's a guy who loves both extras and great transfers to do? The old Blu-ray literally had no extras at all, and having sworn that I'd never buy a BD without  at least comparable extras to a DVD set I already own*, that puts the original release out of the running. The new release also includes a coupon good for a free ticket to see Adrian Brody vs Predator this summer, so in reality the $22 Amazon.com is asking for it is really less than $15, assuming you planned on paying to seeing Danny Trejo get his head blown up by a purring space-bug on the big screen. And don't pretend you weren't. Meanwhile the 2008 bare bones release is a mere $12, or sometimes even less at K-Mart and the like, but no ticket, no extras, and rampant compression issues... crikey, what's the lesser or two evils here?

Personally, I think I'll just keep my 2 disc DVD until they both drop to less than $10 a pop. It's no reference disc, I admit, but I'd rather keep a decent DVD I've already paid for than upgrade to a mediocre Blu-ray with the same exact content.

The worst part is... I'm Having Deja-vu. I swear, if the upcoming anniversary edition of Total Recall is a freshly smeared diaper of a disc, I'm blaming Schwarzenegger himself.
at 12:59 PM