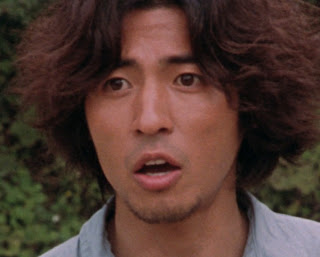 Full Size HERE.
Also THERE.
KITAMURA Ryuhei's action-satire masterpiece VERSUS, just like Ichi the Killer before it, is an SD upscale - despite the US Blu-ray having been in production limbo for nearly two years. It's also the (preferable, I think) original Japanese theatrical cut from 2000, not the "ULTIMATE VERSUS" redux from 2004. As with Ichi the Killer, this remains the best looking and sounding release, but only by default. If you already own the R1 Special Edition DVD, there is no way I can recommend "upgrading", since even with the the increase in compression efficiency the original transfer is so old it looks nothing like 35mm film to start with.

John Sirabella and company, I don't know if you're just taking the piss here or if you literally can't tell the difference between a 1080p transfer and a 480i master. Either way, knock it the fuck off and release REAL HD content from now on. Queen's Blade, Death Kappa or A Lizard in a Woman's Skin would all be a fine start. I guess Machine Girl and Tokyo Gore Police are a pass, since they were shot on SD Video. But if you aren't going to get 35mm print when one exists, just stick with DVD. You fooled me once for all of five minutes, and I'm not going to fall for it again.