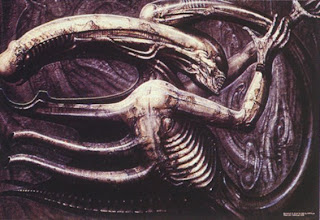 New James Cameron Interview.
For those who don't want to sit through through the whole 7 minutes of Dances with Smurfs* talk and just want the meaty Giger-related center, here's the important part:

"I just did a complete remaster of ALIENS personally with the same colorist that I worked with on Avatar - and it's spectacular. We went in and we completely de-noised and de-grained it, uprezzed it, color-corrected it (and) every frame and it looks amazing. It looks better than it looked in theaters originally - because it was shot on a high speed negative that was a new negative that didn't pan out too well and got replaced the following year, so it was pretty grainy. So we got rid of all the grain - it's sharper and clearer and more - more beautiful than it's ever looked, and we did that to the "Long Version, you know, to the [air quotes] "DIRECTOR'S CUT" [/air quotes] or, the extended play... yeah, I call it the FM mix. [laughs] That's dating myself! "

The fact that he's using incorrect terminology like "uprezzed" proves that this is the quick-'n'-dirty explanation for average folk who don't know what words like telecine, 4k, DSR and DVNR mean... but this is still disheartening. Prior pieces released around Comicon suggested that all four of the Alien films had been restored by Lowry Digital, the same clods who basically created the DVNR > Scratch Repair > Simulated Digital Grain combo for 35mm film that I simulate on VHS... the trouble is, if I had access to 35mm negatives I wouldn't stoop to those methods in the first place.

I've said before - and stand by it - that Digital Video Noise Reduction is NOT a quick-fix for grain. The best you can hope to do is temporally smear all the grain into a static blob, which affects not only the "crawling" grain, but also smooths out fine detail as a side-effect. If the grain is fine, such as the grain found on the 70mm feature PATTON, the result is a very smooth and seemingly sharp - but ultimately waxy and lifeless image: 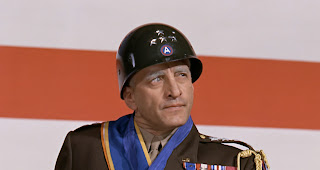 The problem here is that Aliens was shot using cheap, gritty film stock that Kodak themselves thought was such shite they discontinued it a year later. So Aliens has always, always been an extremely gritty affair. And just what happens when you try to use noise reduction on stuff that doesn't already have a fine grain-structure to work with? 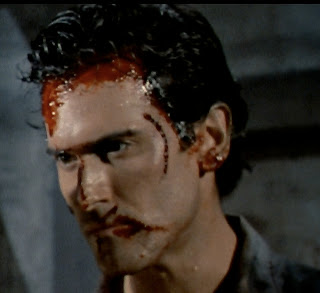 Granted, Lowry probably has better DVNR algorithms at their disposal than Anchor Bay ever did, but my point stands; "de-graining" doesn't work without having detrimental side-effects. It basically can't. You can't remove film grain without further damaging and manipulating the underlying image, and so your best bet is to simply leave the grain as it is.  Analog video noise (sadly) has much the same problem, but at least we KNOW analog chroma noise shouldn't be on DVD. Natural film grain as found on the negative or interpositive should be, and if it's there in the source, by crickey, it should be left as-is.

Here's the rub, though: James Cameron has known since 1986 that the film stock was utter crap. Reportedly he was never happy with it, and was pushing for it to be removed going back to the days of laserdisc! This isn't Cameron actually having a revisionist lighbulb go off over his head or Michael Mann revisiting his work every couple years the way he's prone to do, this is Cameron using modern tools to fix a problem the film has always had - and a problem he literally couldn't fix when the film was made. So do we applaud Fox for listening to the guy who ultimately created the film, or do we scorn Cameron for doing it in the first place? Or, if you'd rather show weakness on the internet, do we just look the other way since it's "supposed" to be grainless?

I'm frustrated to say that, I guess, the proper answer is a mix of all three. I don't like DVNR - I understand that it's used in Digital Intermediate workstations and is thus "baked in" to the film from the start. I also understand that it can be used to achieve a certain 'look' when film stocks or available lighting made that particular effect impossible. There's even instances where lousy telecine or optical works done in post have to be accounted for, and using DVNR is the only way to get the negative "back" to the state it should have been in to start with! There are absolutely times when DVNR is the only tool that'll fix a certain problem... I just don't think removing all of the grain from an entire movie is the way to approach it. If your film is grainy, it'll always be grainy; learn to live with it and either love it, or watch something else, for goodness sake.

With this in mind, I'll wait for screencaps before knee-jerking one way or the other... but who the fuck am I kidding. I'll buy the ALIEN ANTHOLOGY box set the second its' available, and wither the first two films look phenomenal or like scabrous ass, I'll be happy to have them in HD. In the end I may disagree with what Cameron thinks his film should look like now, but it's not really "my" film to dictate those matters to. All I can do is get my hands on older transfers that don't have DVNR and be happy with them - various HD broadcasts of ALIENS reportedly have a naturally grainy texture, but I'm sure they're also littered with MPEG-2 artifacts and probably have all sorts of problems the new remaster will not. So pick your poison, ladies and gents; it's really just a question of which type of video error you personally find the least offensive.


*I liked Avatar. No, I did. (I mostly liked THE SPIRIT too, but that's yet another ball of poprocn wax.) Go ahead collective internet hate, call it a pile of goofy 3D Tech Demo crap all you want - because deep down you know that it's still a much more sensible and exciting film than THE TERMINATOR.
at 1:06 AM