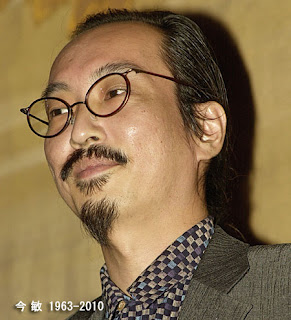 Not just Japan, but the entire world has lost one of its' most fascinating animation directors. He will be sorely missed by myself, and surely anyone familiar with his work.

Paranoia Agent and Perfect Blue will always remain my favorite Kon works for reveling in the thematic and aesthetic end of the psychological horror film, but there aren't enough kind words to be said for the cyberpunk science-fantasy Paprika, the charming and bittersweet humanity of Tokyo Godfathers, and the sweeping love of Japanese film found in Millennium Actress. I'll forgive people who can't stomach these genres on their own terms, but it's almost impossible to hold his broad interests' against the visual and narrative skill he brought to each and every project. A man like Kon only appears once in a blue moon, and the fact that he only had the chance to direct four feature films* and one 13 episode television series before his death is nothing short of heart-breaking.

I'll be very curious to know how close to completion his 2011 children's film The Dream Machine was, and hope the finished film is every bit as full of his spirit as the works completed while he was alive all were.

*Perfect Blue was originally going to be an OVA, as I understand it, but with the length and scope of the picture this is largely irrelevant.
at 11:37 PM