Daughter of Dreck vs Gays Ablaze 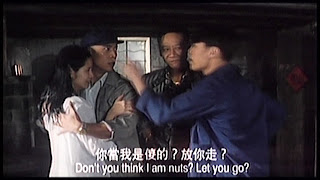 Oh my fucking GOD, Daughter of Darkness II/滅門血案 之 借種 is u-g-l-y, bitch ain't got no alibi. It's an analog transfer made on a CRT-tube with more ghosts than a Scooby-Doo marathon, and the fact that a worn-out theatrical print was used as the source certainly didn't help matters. To top it all off, the whole thing was squeezed onto a DVD5 in the late 90s, so it basically looks as fugly as was humanly possible short of slapping a pan-scan VHS onto the DVD.

It's still fucked, make no mistake, but I'm afraid I've done all I can. I'd feel bad charging people full price for this transfer, but there's no better source out there. It's yet another nasty film from Billy Tang, both one of the best and prolific sleaze-hounds of the era, so I'll just have to sit on it for now and decide what to do with it later. Maybe include it as a Bonus Film with Ivan Lai's initial take on the story? How much more would anyone here interested in buying the first Daughter of Darkness pay for the sequel, knowing the quality isn't anywhere on the same level? 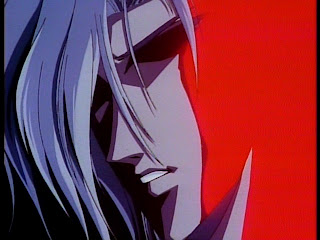 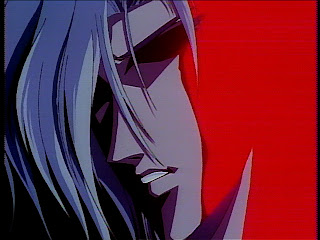 In other news, we just got our hands on a large number of vintage anime LD captures. That's nothing new - I mean, cripes, you guys know that - but it's exciting to see the results of a high-quality DV conversion box first-hand. Granted, these caps were taken from different copies of the same print run, using different players, and possibly even different cables, so there's a wide gap in things like color saturation, chroma noise, and other things that in no way relate to the capture directly.

As much as I would love to capture 720x480 with synched audio, zero frame-drops and full 4:4:4 RGB32 colorspace... it's basically impossible. That shit's voodoo made up by the craphats who sell capture cards, I'm sure of it. DV thus seems like the perfect interim step, since it's high bitrate of 25 Mbps should have minimal compression issues and with every frame being an I-frame, editing is a snap... but, compare the two. Notice how all of the angles are harsh and edgy on the DV capture, but nice and smooth on the DVD? That's because of a little kink in the NTSC DV spec called 4:1:1 chroma subsampling. Basically, to decrease artifacts the color information is reduced into bigger, chunkier pixels, and that leads to blocky edges, particularly on stark reds and blues.

So, the chroma subsampling issue means that capturing analog video straight to DVD is better... 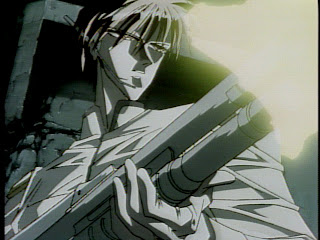 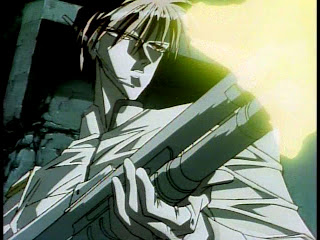 With a rebuttal is Zetsuai's music video counterpart, Cathexis. Full of fast motion, hard interlacing, analog noise and other nemeses of general video compression, the relatively low average bitrate of 6.2 Mbps (variable, with dips as low as 3.5 and highs of 9.0) absolutely chokes on the complex motion, rendering both Izumi and his boomstick as blocky chunks of compressed shit.

Also, note that on monochromatic imagery, the chroma subsampling doesn't harm much on the DV cap. Take THAT, MPEG-2, ya' 14 year old whore!

Crap like the frame above is EXACTLY why I wanted to capture to something higher quality than DVD in the first place. Let's face it, the end result is DVD anyway, but there's no magic you can rub on the above frame to remove the pixelation that's already there. Less pixelation on the source, less pixelation on the finished product... DVD isn't perfect for this, but clearly, neither is DV.

So, what's the ideal solution? I guess the least evil format available today are the stand-alone Blu-ray recorders, which capture 4:2:0 colorspace (same as DVD) at an average bitrate of up to 40 Mbps.  Too bad the first models to be sold in the US are "professional" hardware at the cost of a cool $2,000... I could import an older Japanese model, I'm sure, but calling that 'cheap' would be a stretch. There are also "Record your own Blu-ray!" break-out boxes floating around now, but I can only assume the DAC's involved are of rather dubious quality, rendering their superior compression kind of worthless.
at 12:31 AM 6 comments: 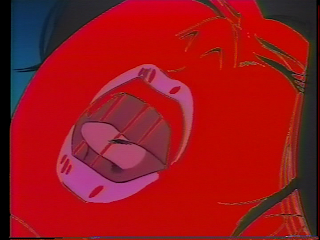 I still I love my work!
Just 'cause we have absolutely no shame here at Kentai Films, we decided to re-open with the short subject I continue to describe as "I Spit On Your Loli". Just head on over to that "Buy DVDs" link for more info. 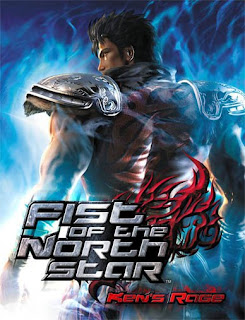 
Themesong We're Probably Not Getting

First time I've ever pre-ordered a game for myself. Also, incidentally, the first time I'm getting a Game Stop bonus - and I didn't even know I'd get anything extra when I put the cash down. Awesome.
at 2:11 PM No comments: