What with me having worked on a film co-starring the creepy fucker, it only seems relevant that the Kentai Blog would celebrate the Feast of a Thousand Turkeys by sharing this horrific monstrosity: 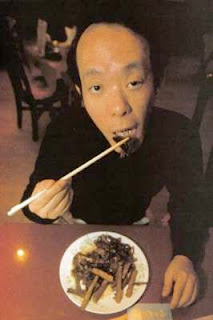 An Interview with Issei SAGAWA
(Part I) - (Part II)
For those who don't know, the short version is that in 1981, Sagawa was studying abroad, fell in love with a pretty Dutch girl, and then fucking killed her so he could eat her flesh. France decided he was too crazy to convict, so he was deported back where he came from... trouble was there were no concrete terms for his institutionalization, so after a decade and a half Sagawa convinced doctors he was no longer a danger, and checked himself out. Which, apparently, you can legally do in Japan.


The creepiest part isn't actually the fact that Sagawa is a free man, but the fact that he's become a minor celebrity for his crime! He is (or at least was) a regular commentator on trashy Japanese TV, played the villain in Sato's psychedelic and misanthropic sex-thriller THE BEDROOM, has written restaurant reviews for Spa magazine (it's okay - we all laugh when we read that the first time), and is now setting the record straight on what he did, how, and why... presumably because most of the rest of the media outlets has grown tired of him.

To be fair, the attention he gets isn't entirely his fault; just typing in the name "Charles Manson" on Amazon.com gives me over 500 books, videos, posters and albums either featuring or relating to the craziest mother fucker to ever convince hippies that murdering was even better than love and peace, so the fact that the media embraced Sagawa in Japan - a country in which he's done nothing illegal - shouldn't be that shocking. Creepy, sure, but not surprising anyway.

Of course, it's only human nature to be fascinated by death. People used to buy tickets to a hanging the way people now purchase them to go to a rock concert, and many of the most infamous killers are made popular in the cultural landscape not because they pulled a trigger, but because of the bizarre stories connected to them, and the unusual personalities that often accompany having a total lack of conscience or semblance of respect for human life. Ed Gein and Ted Bundy and even Sagawa-kun up there aren't fascinating because they killed a person; they're fascinating because they're goddamn fruit loops, and everything that comes out of their mouth is so bizarre it can't help but be memorable and begging to be studied.

Make no mistake: fascinating or not, this man is the sickest of sick fucks, and stands behind only a slight margin behind Tsutomu MIYAZAKI on the "What The Fuck Is Wrong With Japan?!"-O-Meter. If there really is anything resembling good and evil, this is the latter personified. And he makes money by telling people why he did it. He is a wicked blight as an individual, but society is no better in welcoming him not just as a specimen to be studied, but as a meme to be exploited for a quick buck.

Still, ask yourself... who would you rather have as a media superstar? Sagawa, or this asshole? 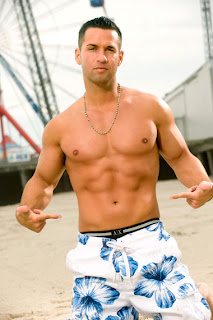 Personally, I'd rather give Dennis Rader his own talk show.
at 8:54 PM