Inside My Melting Brain

Sorry for all being quiet on the Eastern Front. Restoration Project X requires a lot of attention right now, so it's not as if I'm trying to ignore you all. I care, honest I do... I'm just yanking my hair out by the roots, combing frame-by-frame to find scenes that have been sodomized by scratch repair filters and then find myself re-encoding the entire film because of a brief 1-frame bug.

It's enough to turn anyone into a violent hermit, trust me... and I haven't even gotten to the manual frame-by-frame dirt clean-up stage! Let's use a totally unrelated title to show you the kind of crap I'm going to be fixing... 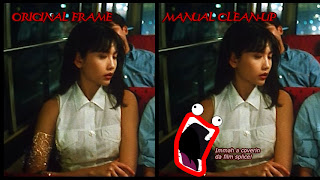 Well. You get the idea, anyway.

Sadly this one's kind of... problematic. The film is the fantastic 2008 French horror film  INSIDE/À l'intérieur which, like so many independent Eurotrash productions, was shot on HDCAM at 25fps. It's not that the film has been sped up like most theatrical features for PAL countries, the original film -is- 25 frames per second, and as such the Scandinavian(?) Blu-ray is, to quote the package, "1080p 25fps". 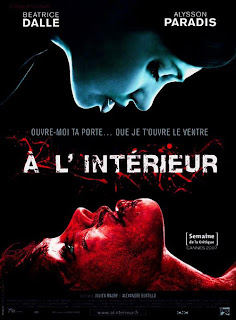 Now, technically, it's 1080i at 50hz with 2:2 pulldown. But the real-world difference between 1080i@50hz and 1080p@25hz is non-existant, and I'm actually kind of an asshole for even mentioning it. But you know, Blu-ray Video spec, High-Profile Level 4.1, blah blah short version:


BITCH WON'T PLAY ON MY TV.
I've patched the disc with English subtitles, but so fucking what? The disc is "PAL HD", and won't even play on most US Blu-ray players. Even if your US player does support it and doesn't just throw out an error message or a blank screen, odds are it won't actually convert the signal to 1080i@60hz, which is the only interlaced refresh rate American TVs can display! If you're awesome and have an Oppo which has a built-in frame rate converter, you're all set, but if you're a cheap bastard milking a PS3 (just like me) then you're kind of up a creek on this one.

If you already live in a country with PAL TV - anywhere in Europe, Australia, mainland China, random parts of South America... pretty much anywhere that wasn't America or Japan's technological bitch, you're all set. But that still leaves out my general target demographic of "everybody", so this one needs to go back to the drawing board for now.

INSIDE will be left out of the Kentai Films catalog until such a time as I can offer a version that'll play anywhere in the world. That will, invariably, mean that I re-encode the feature either at 24fps with pitched-down audio, or convert the 25fps "progressive video" to 30fps 1080i - or in other words, the dreaded PAL > NTSC conversion tactic we've seen on John Woo's The Killer. The former isn't quite ideal, but I'm liking it a fuck of a lot better than the other option.

I believe the PS3 will play 25p/50Hz .ts/.m2ts files. But of course that doesn't help those with other players, and I'm not sure if it will display subtitles. Also, I believe it won't play DTS MA (or even regular DTS) streams from ts files, they have to be AC3 or LPCM. It might be worth the burn time if you have a DL BD50 (I'm assuming the film doesn't fit on a BD25), though. If it works, you can perhaps offer an alternate version without re-encoded video.

In addition, I'd just like to take this opportunity to brag that not only do I have an Oppo, but I also have a Sony LCOS projector which will take just about any video format I throw at it and display it in a multiple of the video's native framerate. It's a Japan model, but I'm pretty sure the US models (and other LCOS projectors, not sure about LCD or DLP) function the same way.