Try as I may to be a focused and productive individual - an experimental project has just been translated, and I'm doing some lab tests on Five Star Stories right now - I'm still prone to flights of digital tomfoolery that have less to do with "Video" and more to do with "Games". And it so happens that my endless bromance with Fist of the North Star has entered its' most raw and throbbing stage in years with the North American release of FIST OF THE NORTH STAR: KEN'S RAGE, which I'll from here on out refer to by its' slightly more fitting Japanese title, 北斗無双/HOKUTO MUSOU.

...which, all things considered, probably should have been "North Star Dynasty Warriors" in English speaking territories. But, whatever. 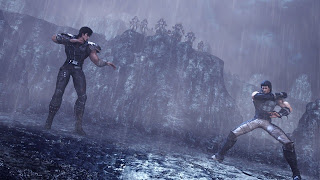 Is HOKUTO MUSOU the best game ever? Probably not, no. That isn't directly an insult, just the law of averages, since the world of video games has grown so cut-throat and expansive that saying anything is "The best X ever" no longer means much. Is Call of Duty the best game ever? Not if you don't have a hard-on for military fetishism, and so far I only seem to get a boner when those squadrons involve martial arts monkeys, pantless all-girl SWAT teams, or big-ass robots. Is Dead Rising 2 the best game ever? That depends on your love of zombies being as strong as it is for duct-tape. Is Cooking Mama 2: Cooking With Friends the best game ever? Perhaps... but only because you can make Mama wear a chengxiam AND a Mr. Peanut monocle at the same time. Video games are their own universe, not their own genre, so that places Hokuto Musou somewhere in the "pummel everything that moves" category, which has largely been replaced by the first person shooter and grim natured stalk-and-kill titles. I suppose this is something of an antiquated genre, the Brawler game that saw its' heyday in arcades during the early 1990s, with the modern day tweaks that come from being a home game.

Is it the best Hokuto no Ken related game ever? Probably, yes. Even if PSX action game and Punch Mania put up quite a struggle, in their own unique ways. Not fixing what isn't broken, the game mechanics are familiar to anyone who's played more than 5 minutes of any Dynasty Warriors title; you (and maybe a friend) select your warrior, kill everything in sight with a series of combos and special attacks, level up your fighter at the end of each stage via XP, lather, rinse, repeat.  One of the most regular criticisms the game has endured is that its' repetitive, but I think we all could have guessed that going in. The soundtrack is a combination of modern metal and electronic instrumentals that have become synonymous with the Hokuto no Ken franchise since the New Savior Legend movies started in 2006, and much like the decaying backdrops are more than adequate, if not a masterpiece. (The boss rooms, however, tend to be real eye candy... a shame they're never expanded upon.) Graphics are variable, in a sense, with gorgeous renders during the most important cut scenes and brief asides of peasant villagers getting mowed over being a bit less than amazing. Much like the simplistic gameplay, the technical aspects of the game aren't busy setting any new standards, but they're never less than adequate either.

Completing each mode typically gives you either a new character or a new outfit, and there are - of course - manga faithful outfits, additional challenge modes, and even exclusive playable characters you can download for a nominal fee. That's one of those "modern day tweaks" I was talking about earlier. 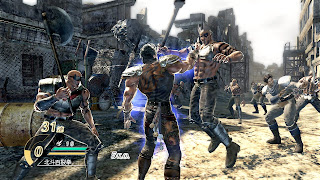 A total of five "Legend" (Canon) stories and eight "Dream" (Original Content) scenarios are included on-disc. Each of the "Legend" chapters gets a ending cut scene, plus an opening for the first chapter, while the rest of the story proper it told via narration. Not a problem for Hardcore Hokutoheads like myself, but I can imagine those new to the franchise will be a bit perplexed at who the fuck these people are, why Hokuto and Nanto can't just get along, and all that post-apocalyptic jazz. All of the dialog in Legend mode is from the manga verbatim, so if you can forgive that all of the backstory is implicit it's a fairly faithful take on the Legend of the Centuries' End Savior.

Each character has been given a totally unique fighting style, unique to the point where I almost like Jagi now. It's just too goddamn fun using a combination of dirty wrestling moves, a pair of shotguns, and a mother humping rocket launcher in hand-to-hand combat. Everyone has a total of eight "Signature Moves" (which cost you having stored up enough damage for a token), and with the rich tradition of ultraviolence these are actually worth the time grinding in stage replays just to earn Mamiya tripping and then stabbing her opponent in the face, or Shin running an opponent through and draining their life force to replenish health. It may not be a fantastic "fighting game" in the Street Fighter sense, but using your special moves wisely helps make it a varied and challenging adventure game. You can also toss discarded missiles, run thugs over with a motorcycle, abuse spear launchers and generally just break everything in sight. With the number and scope of stages being limited, it's good that they're so interactive; as a fan I'm disappointed that Cassandra looks like a dilapidated shopping mall rather than a massive gothic castle,  but at least the programmers at Omega took the time to make it as claustrophobicly labyrinthine as they could.

The "Dream" mode is a strangely interesting concept, in that all 8 of the stories are intertwined but unique. Basically, the norms of the storyline come to a screeching halt in the crystal ball of a mysterious fortune teller, giving players an option to see a tale in which the Nanto Masters stood united against the Hokuto Brothers, pitting old friends against each other and forcing sworn enemies to form a temporary alliance. With a few exceptions these OC storylines mostly make sense in the established manga continuity, and the fact that each one changes so that the selected player is victorious keep the twists coming to the very end. I'm familiar enough with the canon material that seeing something new (and NOT totally retarded... fucking Raoh Gaiden...) is pretty fun, but again, I'm sure how amusing this all is ties in very closely with how familiar you are with the characters to begin with. I'll also note that the Dream mode cut scenes are notably cheesier looking than those in Legend mode. Not a big deal, of course, but it's hard not to notice when Mamiya's render is slightly cross-eyed, and background textures start to wig out for no apparent reason. 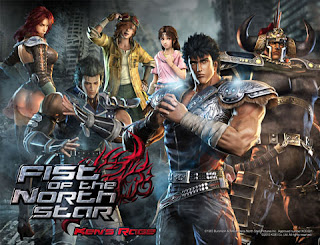 The gang's all here.

The familiar faces of 199X has a brand new cast, and for once I have no major complaints. Of special note is that the TV series' coked out narrator, CHIBA Shigeru, has been upgraded to none other than WAKAMOTO mother fucking Norio. I'm very satisfied with KANNA Nobutoshi's Souther, which I didn't expect, though I'm a bit less enthused by TACHIKI Fumihiko's Raoh than I wish I was. (It isn't *bad*, but fuck, it's no UTSUMI Kenji, either.) KOYASU Takehito hits Rei right out of the park, which makes sense; his husky pretty-boy tenor was a grave miscast as the gravelly and aged version of Kenshiro pretented in the Shin Hokuto no Ken OVAs, but as the suave and cunning Rei he's given a chance to do what he does best. I haven't checked the English version of the game, nor am I likely to unless asked. With all due respect to Mr. Crispin Freeman, I honestly don't care how good his performance is.


One gripe I need to get off my chest is in the localization of the character namess. Many of the names are presented in familiar fashions; Kenshiro, Rei, Mamiya, Raoh, Heart, Jagi, Bat and Ken-Oh all check out. "Uighur" is a pleasantly accurate romanization, and "Rin" is a surprise, but not a problem. "Juda" is a bit of an odd choice; either Yuda or Judas would have been fine, but to meet it half way only makes the game harder to keep track of once "Juza" enters the same battlefield. The ones that make me grind my teeth and wince in a certain state of shock are "Shew" and "Thouzer". The former is phonetically accurate, but just looks ugly to all of my native Anglicized sensibilities. But THOUZER? What the hell is that?! Yes, I know that's the name used on the Japanese arcade game, but that still isn't a good enough excuse.

Another strike against the US release is the fact that the DLC is fucking expensive. In Japan, manga-accurate outfits are 100 yen ($1.25), which seems like a fair price. In the US, "Content Pack 1" (Kenshiro's blue jacket) is $3! With 8 character outfits and one additional player (a random outlaw priced higher than an outfit) that means I'll cough up at least $30-36 in DLC, and that's NOT including new challenge modes! (Which, having tried a few, are actually quite fun.) Heart and a pair of challenge stages came free with the Gamestop preorder before they'll be sold to the general public, so thank fuck for that. Having actually played the game, the only costume that I *must* immediately replace is Shin, who looks like an incredibly pimping Mardi Gras break dancer instead of the refined ruler of a post-apocalyptic dystopia. 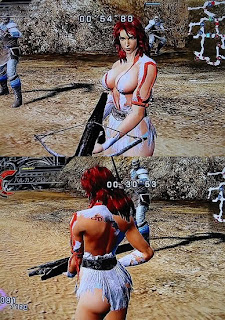 Also, Mamiya gets pretty much naked when you throw money at her outfit, so that's a must have by default. I'm now sad that all of the cutscenes are rendered videos rather than real-time high quality game footage, since watching Mamiya act like a brutal vigilante ice queen while her ass is hanging out would make the Legend mode way more amusing.

Another bone I have to pick is the fact that the 2-player "Dream" mode bogs the PS3 hardware down pretty hard. The one-player mode is consistently smooth with narry a major glitch or any slowdown, but when the game processes two separate battles at once it gets a little twitchy and framerates begin to lag. If you're a lone wolf kind of player this really shouldn't be an issue, but if you have a wife - or one of those totally hetero friend who spends all his time with you, cooks you meals and makes sure you're dressed properly for a job interview - this can get just a bit disappointing. As has been mentioned ad-nauseum by the press at large, the game is no Final Fantasy or Metal Gear Solid to start with, so mucking up the gameplay during intense group-brawls takes the game from slightly above average to slightly below whenever it hits.

Still, the fact that 2 player mode is slightly less awesome than 1 player mode is the biggest complaint I have, so I'm pretty goddamn satisfied. $60 is probably too much for a single video game in general, but for my first ever game I've paid full release-day price for in *years*, I don't actually feel cheated afterward. The brutal, simple, and even grinding nature makes it more of a unique treat for fans of MANine and the Dynasty Warriors franchise than the sort of thing most casual players will jump right in and never put down, but I'd still recommend it even to those curious. It's loud, bloody and quite a bit of fun. Just don't expect the gameplay to change up too much over time.
at 7:41 PM