Forget Black Friday, as Tecmo/Koei have made a substantial drop in the pricing for the second Hokuto Musou download content pack.

Kenshiro's outfit alone was $2.99 on the Playstation Network/240MS on Xbox Live, so I figured that would be the standard pricing. Turns out "DLC Pack 2" includes alternate outfits for Rei, Raoh and Mamiya, all for a reasonable $4.99/400MS. I guess since Kenshiro's original outfit was the pre-order bonus in Japan they decided to price it substantially higher and offer it on release date, as some way to replicate the excitement of paying upwards of over $80 in Japan... somehow, that seems almost fair.

No word on how much the additional 4 manga outfits, "Outlaw" playable character, or various Challenge Modes will cost. But in light of four outfits for eight bucks, I'm thinking it'll be less than the $40 or so I had anticipated for the whole bag of gore.

UPDATE: According to Emilio at Blog of the North Star, the "Outlaw" character was, as of this writing anyway, an exclusive pre-order bonus to Amazon.com customers! Those thieving bastards... 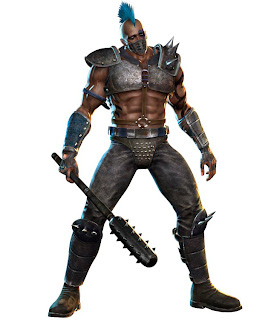 You also get an exclusive Challenge Mode, though if "Exclusives" found on games like Ninja Gaiden Sigma, Dead Rising, and Yakuza are any indication, they'll all be readily available for a fee within a couple months.

I'd rather have the ever-polite Martial Artist Killer Heart than a random piece of Fist Fodder, all things considered, but offering different exclusives like this always gets my panties in a bunch. It really gets me that I didn't even know about it until two weeks after the game came out.
at 4:27 PM

Thanks for the mention, and happy to be helpful! I did a lot of "as it was happening" coverage of Ken's Rage, but I primarily did so via twitter. I'm a reluctant gamer (only bought a PS3 to play Ken's Rage), and didn't want to "pollute" my blog with too many tiny video game updates.

I think you'd be awesome on twitter, by the way.