There's Five Sides to Every Story

THE FIVE STAR STORIES should - by the time most of you read this, anyway - be patched with English subtitles. I just need to tweak the timings from the ADV translation a little bit to fit the new master, though I'm praying that spellings like "Mortar Headd" and "Clotho" are accurate, at least technically speaking. Creator Mamoru NAGANO seems to have pulled vocabulary from the world at large and twisted it to suit the tenants of a science fiction mecha epic, so if anything is 'wrong' with the vocabulary or spelling, I wouldn't have a clue.

Test-burns will be made to ensure that the discs' menus and special features still work properly, but assuming everything beneath the hood went as it should have, then we're golden on this one. The big problem with MEMORIES is the presence of seamless-branching, and that's something that this relatively straight forward short feature doesn't have to worry much about. I'm sure there's a way around that, too, I'm just not sure what that is yet.

I should point out that the BD transfer on FFS is absolutely amazing. No edge enhancement, no grain reduction, not even obvious image-stabilization or scratch removal. I'm sure some people would see it and think "ew, it looks old", but as far as I'm concerned it looks like the 35mm negative is being beamed right to your screen by God. 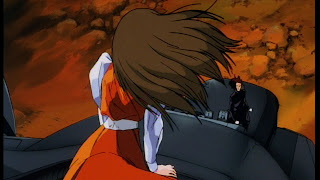 Not that the composite-sourced ADV R1 DVD (above)
had a chance of stacking up. It had a nice booklet, though.

Restoration Project X is going rather smoothly. That'll take up a lot of my time in the near future once I'm left with no choice but to hack and slash at several key scenes with Photoshop, so I'm doing the first big setps now, before I get so deep into Fist of the North Star: Ken's Rage that I never look at my work-computer again.
at 6:22 PM

So were you able to get subtitles working while keeping the original menus? Could you LMK what you had to do? Not looking to start competing with you, it would just be nice to still have the menus when I re-author BDs.

Step 1: Create a compliant SUP file. I've been using GoSUP, BDSub2SUP, and (only as needed) photoshop to get exactly what I want.

Step 2: Add said SUP with MultiAVCHD by opening the BD folder, selecting the right title, and then loading them as "external subtitles".

Step 3: Export as a BDRM folder, and burn with ImgBurn.


While I can't guarantee that the above method will work on every title or hardware configuration, I can at least promise that it created a BD-RE for Five Star Stories that plays in PowerDVD and a PS3 with compliant subtitles. I've got two more BD titles besides Memories to add subtitles to, so keep your fingers crossed.