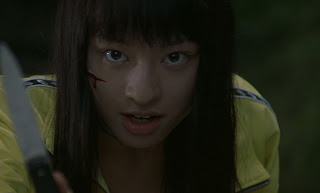 Kuriyama-chan is the only moe I need.
(Cropped, not resized.)
Good News: Arrow Video is releasing a deluxe 2-disc Blu-ray of the late Kinji FUKUSAKU's controversial cinematic swan song BATTLE ROYALE, complete with all the trimmings, and available for pre-order at Amazon UK. Region free, too, and the first 10,000 or so pre-orders get some limited goods in that very sexy box set.

Bad News: It's a goddamn SD upscale of transfers minted in 2000 and 2001, for the Original and Special versions respectively.

Making all of this even more bizarre is the fact that Battle Royale was JUST REMASTERED THIS YEAR...

CURSE YOU, JAMES CAMERON!!!
We might get a nice, new HD sourced version of the Theatrical and Special editions based on the 3D master. That'd just be awesome, wouldn't it?

Or, we might only get this Lucas-level atrocity full of CG blood splatter and bullets mugging for the camera. I'd love to think that Toei isn't stupid enough to pretend that fans of this controversial and already cult-classic title wouldn't want an HD release of the prior two cuts of the film, but if Arrow is releasing the prior editions as upscales now instead of waiting, they may know something the rest of us don't...

So, what'll it be? Peace of mind and some limited edition goodies, or sit this round out and hope we don't wind up in yet another GITS 2.0 scenario? I can't help any of you decide this, but I'd rather you at least make the choice knowing what 17 pounds sterling will actually get you. And High Definition, it ain't.
at 8:16 PM