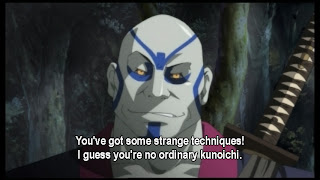 I can't believe it either, but it's true: Remastered in anamorphic widescreen, with a brand new subtitle track, and featuring never-before seen image galleries and the rare Japanese trailer, this is the only version of Rin-Sin's incomplete masterpiece HININDEN GAUSU/LEGEND OF THE SCARLET NINJA you'll ever need.

This DVD took way longer than expected due to... let's call them structural difficulties. Remember how those sweet-ass menus were in 4:3? Well, DVD Spec doesn't like mixing 4:3 menus with 16:9 video. It can be done, but at the expense of basic functionality, like chapter menus and language setup options. In the end we decided to stretch the menus to 16:9 - it's a very minor issue, and one we hope you'll forgive when you see the quality of the transfer.

This unfinished epic has been in the Kentai Films lab for a good long time, and we hope you'll think it's been as worth the wait as we all do.
at 7:04 PM

Because every disease has a cure, herbal treatment is safe to use. Thank you for sharing the information