Mystery Project X is officially on hold until I can get final approval for it. That means I can get my lazy ass back to work on other stuff in the meantime, but doesn't actually mean that it's 100% finished. There's also the little matter of syncing subtitles/alternate language tracks, encoding the feature to DVD in the highest quality possible, and some manual dirt clean-up that'll have to be done over from scratch, but all of this is really small-potatoes in the scheme of getting a finished restored workprint with image stabilization, analog noise removal, film damage repair and every other crazy thing I've had to do like outline darkening, anti-aliasing and creative attempts at chroma interpolation that turned out to only be partially effective.

I've had to restructure some of the processes, and it's meant that the work I had done back in October/November basically had to be torched and worked out from the ground up... it sounds horrible (and is, kinda) but it means the restoration will look substantially better than it would if I'd just have shrugged and said "eh, screw it, looks pretty close". I wasn't starting with a master any sane person should have the slightest bit of hope for, but if vintage Japanese animation has taught me anything, it's that when you've lost all hope that you have to stand your ground and fight to your last breath... even if it means you just end up dying. 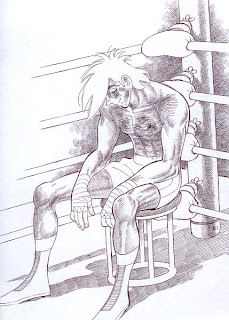 Most iconic spoiler ever?
There's still some banding I wish I could get rid of, and some weird chroma... stuff, I don't even know how to describe it, like, static horizontal banding patterns in the red channel. But in both cases these are side-effects of the source having been limited from the start. It looks pretty damn good, all things considered. Once the DVD encode is finished I'll try to share it via some "Official" means, but I don't have control over any of that, so you might just have to take my word on everything I've said here.

Only thing that still needs to be toyed with is the color correction. I don't typically have to play with analog themed tools like "hue", but for this particular title the RGB data was relatively stable, it just needed to be shifted away from green/blue towards yellow/red, and instantly everything looked just right. I wish more studios would treat analog materials as needing even the most basic of color correction, since even 10 minutes could easily make the difference between a transfer being totally forked and looking more or less okay.

Look forward to more restorations and DVDs in 2011, ladies and gents. I didn't get everything I wanted finished in time, but I still think the quality of what's been completed in 2010 was worth it. With any luck, 2011 will be full of more of the same.
at 3:47 PM