You Can't Stop Progress. (But I Can Sure Make It Slow.)

"Mystery Project X" has been thoroughly beaten to a scratch-repair artifact free pulp, so all that remains are going over a few key-scenes to remove the remaining scratches by hand. I'm increasingly happy with the way this one turned out; the source was such a sow's ear that I wasn't sure I'd come up with anything particularly positive, but checking back and fourth between the source and the close-to-final transfer, I think that maybe there is a God, and that he absolutely loves 80s anime... until he starts eating away details in sparkly pools of water, or causing the gridwork in the walls to disappear the second the camera starts moving. Then I remind myself that God is a vengeful asshole, and I have entered his realm without premission, so he's going to make my trek through playing restoration demi-diety as painful as is absolutely possible. Seriously, God is Nyarlathotep, and that's if we're lucky.

The scene that broke my brain the hardest was a long optical shot where it zooms out and the main character in the shot is moving so quickly that she completely disappears for three frames. 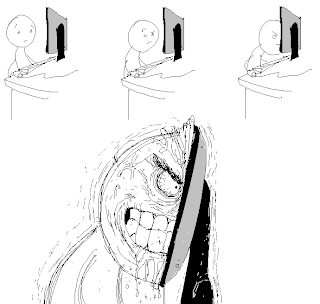 This is your friendly host Kentai,
working on Mystery Project X.
I'm not totally sure that I'll be able to remove the analog errors that appear as little blips that stay on the screen for several seconds at a time, but I'm sure going to give it a try for the most errant of the little fuckers. With the schedule and budget being what they are I already know I just don't have the resources to fix 100% of them, but if I could just get rid of the worst of them in a few key scenes it might make all the difference.

The only change I could see myself applying is swapping points around in the filter chain. Stabilization makes me nervous; on the one hand, it produces some really fantastic results on non-moving scenes. On the other, it makes scenes with a lot of movement - say, a quick camera pan - choke pretty hard. The logical thing would be to do Stabilization BEFORE anything else, but the danger is that you'll fuck a scene up completely and there will be no way to restore it to the way it was. So what the heck do I do? Start with the Stabilizer and hope for the best, or apply it after I've done everything else, which I already know looks okay?

The reason this project is currently grating on me like cold steel on the soft flesh of delicious Parmesan is I'm doing to try both. Encode one version with Stabilization at the start, another at the end. The upside is I can pick whichever one looks better in motion... the bad news is I have to encode everything twice, and some of these scripts take up to 12 hours to finish encoding to a lossless file. Even doing "test scenes" are worthless, because the kind of thing Stabilization and DSR filters tend to screw up are very specific types of shots scattered through the whole, and only watching the finished 120,000 frames of video in motion will tell me if something went awry or not.

It's driving me crazy that I can't actually show you screenshots on what I have accomplished, though. For one thing I can't imagine the licensors would approve of me doing that, much less on the unsanctioned blog where I pimp bootlegs and give venomous criticism towards Japan's new laws restricting brutal and kinky manga from the hands of minors. It's just not the usual corporate scene, ya know?


So in the meantime, look at this sexy HD transfer of another anime feature to only have an ADV DVD... 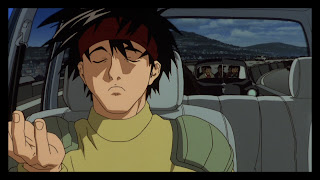